KLM is requesting that all KLM flight personnel who are not vaccinated against Covid-19 and who cannot, therefore, meet the entry requirements set by certain countries, report their vaccination status to KLM Health Services. KLM Health Services will register this as a travel restriction, so that unvaccinated crew are not deployed to destinations with entry requirements which they cannot meet. This is in line with standard KLM procedures for crew members who have travel rest

From the start of the Covid-19 pandemic, KLM worked hard to maintain its global network as much as possible. This meant that customers were able to make (necessary) journeys and cargo flights, including shipments of medical supplies and vaccines, could continue. We now want to carry on offering our customers as many destinations as possible.

We expect more countries to introduce a vaccination obligation in the near future, which means we will be unable to deploy unvaccinated crew to these destinations. This may also apply to routes over countries that have a vaccination obligation for aircrews. This is due to strict flight safety requirements, which demand that it is always possible for a flight to change course and land in an emergency. For the time being, KLM will do its best to deploy crew with travel restrictions on flights to destinations that do not have entry requirements. But, as the number of countries with a vaccination obligation grows, so too will the associated operational complications for KLM.

KLM will not compel its staff to receive a Covid-19 vaccination. This remains an employees personal choice. However, KLM does need to know which employees cannot meet certain entry requirements and who, consequently, cannot be deployed to all our destinations. Employees to whom this applies have been asked to report to KLM Health Services, who will communicate the travel restriction to the KLM planning department.

Delegates from BRICS nations highlighted the importance of enhancing collaboration among astronomers from the countries at the seventh meeting of the BRICS Astronomy Working Group Meeting.

Under the Science, Technology, and Innovation track of the BRICS 2021 calendar, India hosted the seventh meeting of BRICS Astronomy Working Group (BAWG) meeting of Brazil, Russia, India, China, and South Africa, as well as astronomers from these countries in online mode from 19 to 20th May 2021.

From the Indian side, the Inter-University Centre for Astronomy and Astrophysics (IUCAA), Pune, and Department of Science and Technology (DST), Government of India coordinated the meeting. It witnessed participation of all five BRICS countries with more than 50 participants, including researchers, academicians, and government officials.

The delegates deliberated on strategic and operational matters and recommended the networking of existing Telescopes in BRICS countries and create regional Data Network. They agreed to develop flagship project in this area. The members of the working group also indicated future directions of research in this area such as building network of intelligent telescope and data network, study of transient astronomical phenomena in universe, big data, artificial intelligence, machine learning application to process the voluminous data generated now a days due to enhance multi-wavelength telescope observatory.

The BAWG which provides a platform for BRICS member countries to collaborate in the field of astronomy recommended that the focal points in each country should present the scientific results of the work being carried out in each country.  This will help seek funding support to realize the flagship project whenever funding opportunity announced by BRICS funding agencies. BAWG noted the importance of enhancing collaboration among astronomers from the BRICS countries.

India has assumed the BRICS Presidency from January 2021, about 100 events, including Ministerial level meetings, Senior Official meetings, and sectorial meetings/conferences, will be organized as part of BRICS 2021 Calendar. 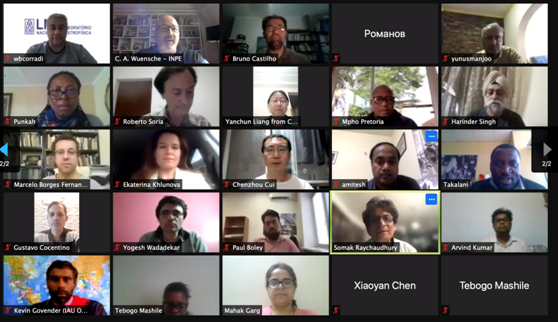