As part of Azadi Ka Amrit Mahotsav, Union Minister Shri Narendra Singh Tomar and Shri Pashupati Kumar Paras today launched the convergence module between the Agriculture Infrastructure Fund (AIF) scheme of the Ministry of Agriculture and Farmers Welfare, Pradhan Mantri Micro Food Enterprises Upgradation Scheme (PMFME) and Pradhan Mantri Kisan Sampada Yojana (PMKSY) of the Ministry of Food Processing Industries. Speaking on the occasion, Shri Tomar said that Prime Minister Shri Narendra Modi’s vision of running the government collectively for the welfare of the people is being realized through such initiatives. He said that this will benefit different sections of the country, including farmers and Small scale entrepreneurs of processing industry. Union Minister of Food Processing Industries, Shri Paras said that this new initiative is beneficial and inspiring for the agriculture and food processing sector.

Shri Tomar further said that according to the spirit of the Prime Minister, the convergence module has been launched through cooperation in various ministries with the aim of taking the benefits of the schemes of the government to the people. He said, Prime Minister Shri Modi has been saying that all the ministries should work in tandem with each other and not work in silos, so that people can get the benefits of various schemes. This initiative will contribute to the realization of Atma Nirbhar Bharat campaign and take forward the projects of public welfare by increasing the power of marginalised section and contribute in the building of the New India. 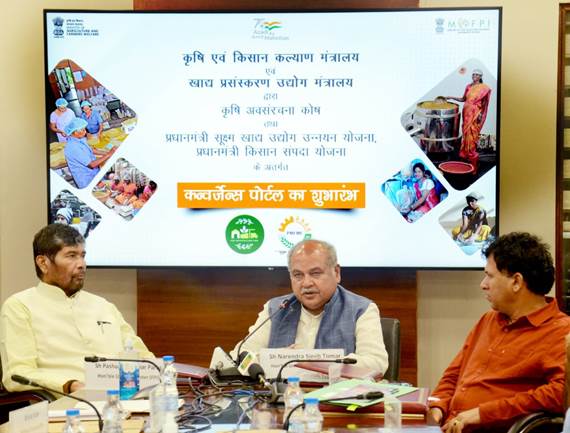 Shri Tomar said that due to the initiative of Prime Minister Shri Modi, many schemes have been launched in the last eight years. It is the good fortune of the country that we have got an experienced and visionary Prime Minister in Shri Narendra Modi. It is his constant endeavour to empower weaker sections and fill the gap in various fields to benefit the people. In this view, the country benefited a lot due to the achievements of the agriculture sector at the time of Covid-19. He said that the Prime Minister spoke about the Vocal for Local and Atma Nirbhar Bharat campaign and announced a special package of Rs 1,50,000 crore for sectors allied to agriculture including the Agriculture Infra Fund of Rs 1,00,000 crore. Benefit of all these schemes are reaching in to the grass root level.

Agriculture Infra Fund (AIF) is a financing facility launched on 8th July 2020 under the guidance of Prime Minister Shri Narendra Modi, for creation of post-harvest management infrastructure and community farm assets, with benefits including 3% interest subvention and credit guarantee support. Under this, Rs 1 lakh crore from 2020-21 to 2025-26 provision of funds has been made and interest subvention and credit guarantee assistance will be given till the year 2032-33.  AIF scheme has the facility of convergence with any other scheme of State or Central Government, therefore in order to optimize the benefits of multiple government schemes for a particular project, these are being integrated with multiple external systems/portals for convergence of schemes on a large scale.  Convergence of AIF has already been done for commercial horticulture development and cold storage development schemes of National Horticulture Board under INM Division of Ministry of Agriculture.

Shri Paras said that this launch will play an important role in making successful food processing enterprises, especially micro entrepreneurs processing agricultural products, which will act as an inspiration for the agriculture and food processing sector. The Ministry of Food Processing Industries has launched the Pradhan Mantri Micro Food Industry Upgradation Scheme on 29th June, 2020 under the Atma Nirbhar Bharat Campaign to enhance the competitiveness of individual micro enterprises, which will provide financial, technical and commercial assistance for up-gradation of micro food processing enterprises in the country. All the States/UTs have appointed nodal agencies for its implementation. Applications for credit-linked subsidies for individual enterprises are approved at the district level, while applications for clusters are approved at the state level/ MoFPI. Under PMFME scheme, 35% credit linked subsidy will be provided for setting up of micro food processing unit with a maximum subsidy limit of Rs 10 lakh and common infrastructure with a maximum subsidy of Rs 3 crore. So far about 62,000 beneficiaries engaged in food processing activities have been benefitted by this scheme. Around 7,300 loans have been sanctioned under the scheme for setting up new micro food enterprises or for upgrading existing units. Out of these, about 60% eligible beneficiaries are engaged in primary agricultural produce and can avail direct benefit through this convergence by availing additional interest subvention of 3% at the rate of interest charged by the banks. The pace of loan approvals is expected to increase by 50% in the third quarter of 2022-23.

Pradhan Mantri Kisan Sampada Yojana, a Central Sector Scheme of the Ministry of Food Processing Industries, is envisaged as a comprehensive package, which will result in creation of modern infrastructure with efficient supply chain management from farm gate to retail outlet. It is an umbrella scheme consisting of sub-schemes. Through this convergence, eligible beneficiaries receiving credit-linked subsidy under PMFME and PMKSY schemes can avail interest subvention at the rate of interest charged by the banks. The eligible AIF beneficiaries under PMFME can get the benefit of subsidy by applying in PMFME MIS portal. The process of obtaining 3% interest subvention has been made very simple, wherein the beneficiary can apply on the portal using the already approved DPR and acceptance letter under PMFME and PMKSY. The ultimate objective of the Ministry of Food Processing Industries and the Ministry of Agriculture and Farmers Welfare is the sustainable development of farmers and food processing entrepreneurs in rural areas and increasing their income. The goal of this initiative is to make the benefits of the schemes reach all the beneficiaries and empower them financially, technically and professionally. Shri Paras expressed hope that this partnership will prove to be a milestone in building a self-reliant India, taking the Prime Minister’s slogan ‘Vocal for Local’ to newer heights.

A Standard Operating Procedure (SOP) was also issued with the objective of providing maximum benefits to the beneficiaries under AIF, PMFME and PMKSY. The SOP will be available on the websites of the scheme.

​In celebration of the 25th anniversary of the establishment of the Hong Kong Special Administrative Region (HKSAR), the Hong Kong Economic and Trade Office in Singapore (Singapore ETO) presented a dance performance, “Convergence: A Dialogue in Dance between Hong Kong and Singapore”, at the National Museum of Singapore today (July 30).

Featuring Hong Kong Dance Company (HKDC) and Singapore’s Maya Dance Theatre (MDT), the event adopted a hybrid format, combining the display of a collaborative dance film, a virtual live dialogue session with representatives of Hong Kong Dance Company, as well as an in-person performance by MDT, which was well-received by an audience of more than 200.

The collaborative dance film was the result of a two-month co-creation process between HKDC and MDT that took place online in a series of workshops, practices and reflections, as MDT learned elements of Chinese martial arts from HKDC and re-interpreted them in Indian classical dance known as Bharatanatyam.

​Speaking at the opening of the event, the Director of the Singapore ETO, Mr Wong Chun To, said the name “Convergence” embodies the ethos and cultural identity of Hong Kong people, a spirit accommodating various cultures while constantly seeking to innovate and absorb new ideas. “This echoes Hong Kong’s role under the National 14th Five-Year Plan as an East-meets-West centre for international cultural exchange,” he added.

He highlighted that Hong Kong has been holding an array of art festivals celebrating different cultures, including French May Arts Festival and New Vision Arts Festival. The city also welcomes artists worldwide to join major art fairs such as Art Basel in Hong Kong, Art Central and Ink Asia. In addition, global thought leaders and industry experts share their insights on design thinking in annual events such as Business of Design Week and Knowledge of Design Week.

On the arts technology front, he shared that the East Kowloon Cultural Centre would become a major venue and incubator of arts technology in phases in 2023. Moreover, overseas arts technology professionals are recognised as needed talents, and will gain bonus points in applications under the Quality Migrant Admission Scheme.

The Singapore ETO will continue to organise a series of events in the coming months to celebrate the 25th anniversary of the establishment of the HKSAR.