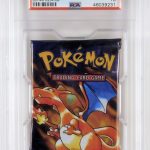 Cranston, RI, USA, September 30, 2020 — Rare vintage comic books, Pokémon collectibles, toys and dolls will all share center stage in Bruneau & Co. Auctioneers’ next major auction, planned for Saturday, October 17th, at 10 am Eastern, online and live in the Cranston gallery. Limited in-house seating is by appointment only for active bidders. They can reserve a seat by calling 401-533-9980.

“This auction is definitely filled with all forms of Pop Culture goodness,” said Travis Landry, a Bruneau & Co. auctioneer and the firm’s Director of Pop Culture. “The comic selection offers affordable copies of important key issues, including Amazing Spider-Man #1 and Journey Into Mystery #83. The Pokémon too is going to be a surprise. The complete set of all four Aquapolis packs in Gem 10 condition are going to drive people crazy. It’s going to be a real fun auction.”

Bruneau & Co. president Kevin Bruneau added, “The toy auction always brings fun to the gallery. This is the first time we include contemporary and designer dolls into the catalog and I’m sure they’ll attract interest. It’s not every day a collection that large pops up on the market for auction.” All categories combined – comics, Pokémon, toys and dolls – total over 575 lots.

Comic book collectors will be dazzled by the selection on offer. The copy of Marvel Comics Amazing Spider-Man #1 (March 1963) is graded CGC 1.0, with cream and off-white pages, and has an estimate of $1,500-$2,500. The book features the second appearance of Spider-Man, the first appearance of J. Jonah Jameson and Chameleon, and the first Fantastic Four crossover.

A copy of Marvel Comics Amazing Spider-Man #300 (May 1988), featuring the origin and first full appearance of Venom, and the last time Spider-Man was depicted in a black costume, graded 9.8, with white pages, is expected to realize $1,800-$2,400. All comics are contained in cases.

The Pokémon collectibles represent a category that’s so young and unpredictable, none of the lots have set estimates. They show in the catalog, for appearance sake, as being $20-$10,000.

Pokémon has been such a huge phenomenon in the collecting universe, it’s hard to believe it’s only been around since 1995. The franchise was created by Satoshi Tajiri in Japan (where, it’s interesting to note, Pokémon is also known as Pocket Monsters) and is managed by the Pokémon Company, founded by Nintendo, Game Freak and Creatures (names familiar to all gamers).

Pokémon is centered on fictional creatures called “Pokémon”, which humans (known as Pokémon Trainers) catch and train to battle each other for sport. Works within the franchise are set in the Pokémon universe. The English slogan for the franchise is “Gotta Catch ‘Em All”. The Pokémon Red and Blue video games for the Nintendo Game Boy system came out in 1996.

Pokémon very quickly grew into a media mix franchise, adapted into various different media, and is now the highest-grossing media franchise of all time, with $90 billion in total revenue. It spawned a hit anime TV series with a hugely successful video game adaptation and, as any collector will tell you, is also into toys, trading cards, books, manga comics and other items.

Previews will be held on Wednesday and Thursday, October 14th and 15th, from 9 am-4 pm Eastern time, by appointment only. To schedule an appointment, call 401-533-9980. Masks will be required at all times, per strict adherence to CDC and Rhode Island state guidelines. Please, only reserve appointment seats for serious, active bidders, as there is limited seating available.

Internet bidding will be facilitated by LiveAuctioneers.com, Invaluable.com, Bidsquare.com and bidLIVE.Bruneauandco.com, plus the mobile app “Bruneau & Co.” on iTunes or GooglePlay.

Bruneau & Co. Auctioneers is always accepting quality consignments for future auctions, with commissions as low as zero percent. Now would be a perfect time to clean out your attic. To contact Bruneau & Co. Auctioneers about consigning a single piece or an entire collection, you may send an e-mail to info@bruneauandco.com. Or, you can phone them at 401-533-9980.

About Bruneau & Co. Auctioneers:
Established in 2015 by owner Kevin Bruneau, Bruneau & Co. Auctioneers is an energetic and young auction house built on the backbone of over fifty years of combined experience in the antiques and auction world. Bruneau & Co. believes in bridging the gap between antique and contemporary utilizing modern day methods to market history in a fast-paced, ever-changing world. We take pride in orchestrating specialty and single owner catalogs giving proper and factual representation of any and all “cool” items of value. As a multifaceted company our expertise goes beyond the traditional antique; we follow market trends and bring to light what the public calls for. From its beginning, Bruneau & Co. has been partnered with Altered Reality Entertainment, parent company of Rhode Island Comic Con in organizing toy, comic, and collectible auctions bringing Pop Culture to a live auction environment. Our focus on emerging markets extends to contemporary and urban art, modern design, and Asian arts. To learn more, visit www.bruneauandco.com.