Eisai Co., Ltd. announced today that LENVIMA (generic name: lenvatinib mesylate), the multiple receptor tyrosine kinase inhibitor discovered by Eisai, in combination with Merck & Co., Inc., Kenilworth, N.J., U.S.A. (known as MSD outside the United States and Canada)’s KEYTRUDA (generic name: pembrolizumab) has been approved in Taiwan for the treatment of patients with advanced endometrial carcinoma who have disease progression following prior systemic therapy in any setting and are not candidates for curative surgery or radiation.

The approval is based on results from the pivotal Phase 3 Study 309/KEYNOTE-775 trial. These results were presented at the Society of Gynecologic Oncology (SGO) 2021 Annual Meeting on Women’s Cancer in March 2021, and published in the New England Journal of Medicine in January 2022.(1)

In this trial, LENVIMA plus KEYTRUDA demonstrated statistically significant improvements in overall survival (OS), reducing the risk of death by 38% (HR=0.62 [95% CI, 0.51-0.75]; p
LENVIMA plus KEYTRUDA was previously approved under accelerated approval process in Taiwan, for the treatment of patients with advanced endometrial carcinoma that is not microsatellite instability-high (MSI-H) or mismatch repair deficient (dMMR), who have disease progression following prior systemic therapy and are not candidates for curative surgery or radiation based on data from the Study 111/KEYNOTE-146 trial. In accordance with accelerated approval regulations, continued approval was contingent upon verification and description of clinical benefit; these accelerated approval requirements have been fulfilled with the data from Study 309/KEYNOTE-775.

Eisai positions oncology as a key therapeutic area and is aiming to discover innovative new medicines with the potential to cure cancer. Eisai is committed to expanding the potential clinical benefits of lenvatinib for cancer treatment, as it seeks to contribute to addressing the diverse needs of, and increasing the benefits provided to, patients with cancer, their families and healthcare professionals.

The approval was based on data from Study 309/KEYNOTE-775 (ClinicalTrials.gov, NCT03517449), a Phase 3 multicenter, open-label, randomized, active-controlled study conducted in 827 patients with advanced endometrial carcinoma who had been previously treated with at least one prior platinum-based chemotherapy regimen in any setting, including in the neoadjuvant and adjuvant settings. The primary efficacy outcome measures were OS, and PFS as assessed by blinded independent central review (BICR) according to RECIST v1.1.

Patients were randomized 1:1 to receive LENVIMA (20 mg orally once daily) plus KEYTRUDA (200 mg intravenously every three weeks) or investigator’s choice, consisting of either doxorubicin (60 mg/m2 every three weeks) or paclitaxel (80 mg/m2 given weekly, three weeks on/one week off). Treatment with LENVIMA plus KEYTRUDA continued until RECIST v1.1-defined progression of disease as verified by BICR, unacceptable toxicity, or for KEYTRUDA, a maximum of 24 months. Administration of LENVIMA plus KEYTRUDA was permitted beyond RECIST-defined disease progression if the treating investigator considered the patient to be deriving clinical benefit and the treatment was tolerated.

In March 2018, Eisai and Merck & Co., Inc., Kenilworth, N.J., U.S.A., known as MSD outside the United States and Canada, through an affiliate, entered into a strategic collaboration for the worldwide co-development and co-commercialization of LENVIMA. Under the agreement, the companies will jointly develop, manufacture and commercialize LENVIMA, both as monotherapy and in combination with KEYTRUDA, the anti-PD-1 therapy from Merck & Co., Inc., Kenilworth, N.J., U.S.A.

In addition to ongoing clinical studies evaluating the LENVIMA plus KEYTRUDA combination across several different tumor types, the companies have jointly initiated new clinical studies through the LEAP (LEnvatinib And Pembrolizumab) clinical program and are evaluating the combination in more than 10 different tumor types across more than 20 clinical trials.
In Taiwan, Eisai’s pharmaceutical sales subsidiary Eisai Taiwan Inc. is marketing Lenvima and is co-commercializing it with a local branch of Merck & Co., Inc., Kenilworth, N.J., U.S.A. 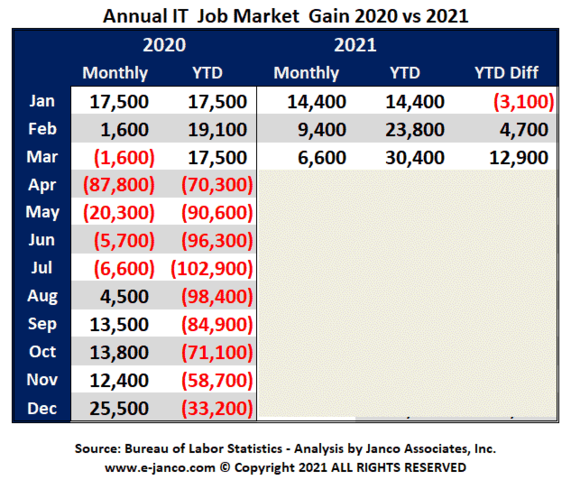 Park City  UT www.e-janco.com Janco has analyzed the potential impact of the proposed tax plans and estimates that 50,000 to 75,000 IT jobs will be lost if the taxes proposed are passed.

The CEO of Janco Associates, Inc., Mr. M. Victor Janulaitis said, “The proposed increased corporate tax rates, reinstatement of the minimum tax, elimination of expensing investments, elimination of reduced capital gains tax, and higher individual tax rates will slow if not stop investments in IT. This in turn will slow the expansion of the IT job market. This will start as soon as it looks like the taxes may be passed. If inflation rears its head due to increased deficits there could be a double hit.”

Janulaitis added, “A Rice University study, estimates that the US job market will lose over 1 million jobs due to the proposed taxes. We agree with their conclusion and estimate that the IT job market will shrink by between 50,000 to 75,000 jobs in 2022 and 2023. At the same time, there is a potential for a downturn or recession as companies adapt to the new higher taxes. However, in the next two quarters the IT job market will continue to grow. Growth will be driven by the re-opening of businesses. Once re-opening is completed, other long term factors will take hold. In our opinion that will be in the first quarter of 2022.”

The CEO followed up with, “We continue to forecast that close to 100K new IT jobs will be added by the end of the 4th quarter of this year. CIOs now are no longer in survival mode. Now they are looking ahead to the post-pandemic operating environment. “

He added, “To support CIOs in managing this process, we have just released our Post Pandemic CIO Management Tool Kit. It contains everything that they need to have a set of functioning infrastructure policies, job descriptions, skill set definitions, compensation data, hiring tools, and post pandemic processes including WFH and cloud processing.”

Janco is an international consulting firm that follows issues that concern CIOs and CFOs. The firm publishes a series of IT and business Infrastructure HandiGuides® and Templates including IT Infrastructure Policies and Procedures, Disaster Recovery/Business Continuity Template, Security Template, IT Job Descriptions, and its semi-annual IT Salary Survey.