The four-day long, country’s biggest Tribal fair Sammakka Saralamma Jatara concluded yesterday after being celebrated with traditional fervour and zeal. It is said to be one of the largest gatherings of tribal communities. This year the historic festival began at Medaram village in Mulugu district of Telangana on February 16, 2022 with participation of thousands of devotees. As per the age-old ritual, the tribal priests performed special pujas at Chilakalagutta forest and the Medaram village. The devotees huddled around the road worshipping the tribal deities and walked barefoot to offer jaggery to the goddesses.

Shri G Kishan Reddy, the Union Minister for Culture, Tourism and Development of the NorthEastern Region (DoNER) visited the ongoing Sammakka-Saralamma Medaram Jatara and offered prayers to the goddesses Sammakka and Saralamma. The Union Minister was accompanied by Smt. Renuka Singh, Minister of State for Tribal Affairs. During his visit Shri G Kishan Reddy, as per tradition, offered jaggery which is popularly also known as ‘Bangaram’ (Gold), equal to his weight. He said, “I seek blessings of Sammakka and Saralamma Ammavaarulu for the people of India. This festival and the congregation of the devotees exemplifies the cultural values and ethos of India. The lives of Sammakka and Sarakka and their fight against injustices and tyranny continues to inspire all of us and is worth emulating”. 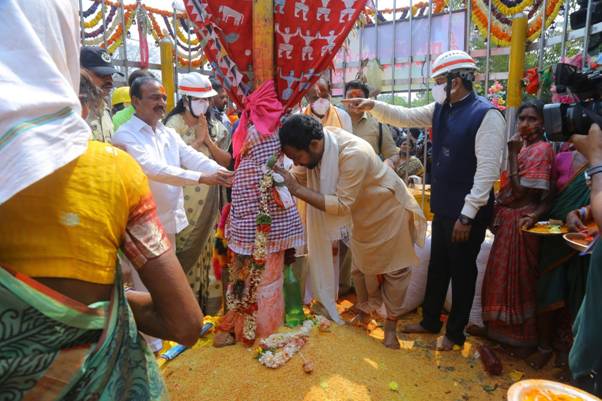 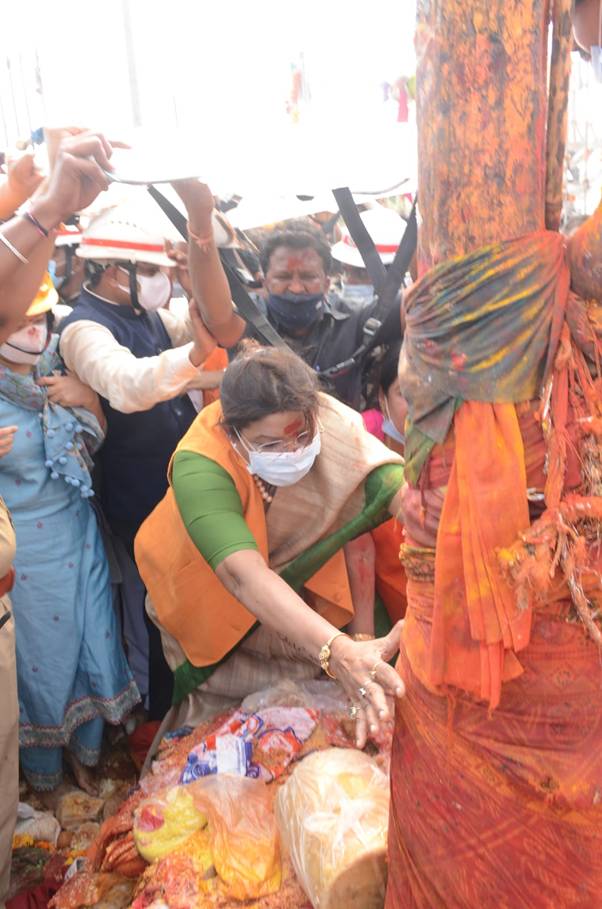 The Union Minister of Culture, Tourism and DoNER added, “The Sammakka Saralamma Medaram Jatara is one of the largest Tribal festivals in the world and the government is extending all possible support. Recently, the government of India under the Prime Minister released a total amount of Rs 2.5 crores through the Ministry of Tribal Affairs and the Ministry of Tourism to celebrate this festival. Since 2014 the Ministry of Tourism Government of India, under the Domestic promotion and Publicity including hospitality scheme has released 2.45 crore for celebrating several festivals across the state of Telangana”.

Offered ‘Bangaram’ (jaggery) at four-day biennial Sammakka-Sarakka Jatara, known to be the Kumbhmela of the south, at #Medaram village in #Telangana today. pic.twitter.com/7SBoEMXfzt

The congregation of the devotees exemplifies the cultural values and ethos of India.

The lives & works of Sammakka & Sarakka are ever inspiring & their fight against injustices & tyranny is worth emulating. pic.twitter.com/wLMRbWjpXl

The Union Minister said, “The Medaram jatara stands as a symbol of tribal culture and tradition. As a part of Swadesh Darshan scheme, the Ministry of Tourism undertook projects to develop the Tribal Circuit of Mulugu, Laknavaram, Medavaram, Tadvai, Damaravi, Mallur and Bogatha waterfalls and constructed a guest house in Medaram. The Government of India sanctioned approximately 80 crores for the Tribal Circuit in Telangana and this included the construction of tourist amenities centre, amphitheatre, public convenience facilities, cottages, tented accommodation, gazebos, seating Benches, solid waste management infrastructure, solar lights, landscaping and drinking water fountains in Medaram. Works have begun for the construction of tribal university in Mulugu at a cost of Rs 45 crore and it will be completed soon”.

The Union Minister Shri G Kishan Reddy said, “We are committed to work towards recognising the contribution of the tribal community and enable them to get the rightful recognition who have been forgotten over the years and to ensure that the heritage, culture and the values of the 705 tribal communities that constitute approximately 10% of our population”.

Furthermore, he added, “As the country is celebrating Azadi Ka Amrit Mahotsav, the Government of India is commemorating 75 years of progressive India and its glorious history of its people, cultures and achievements”. Recently we celebrated the Janjatiya Gaurav Diwas on the occasion of the birth anniversary of the legendary tribal freedom fighter Bhagwan Birsa Munda. Several programmes are being organised across the country to honour the legacy of the tribal freedom fighters like Komarama Bheem, Ramji Gond and Alluri Sitarama Raju who till now have remained the unsung heroes of our freedom struggle. To recognise the tribal freedom fighters who participated in about 85 revolts during our independence movement we are building 10 tribal museums across the country. This includes the Ramji Gond Tribal tribal museum in Telangana and the Alluri Sitarama Raju Tribal Museum in Andhra Pradesh with a commitment of Rs. 15 crores rupees each. These will showcase the contribution of our heroic tribal warriors who fought against the oppressive rule of the British”.