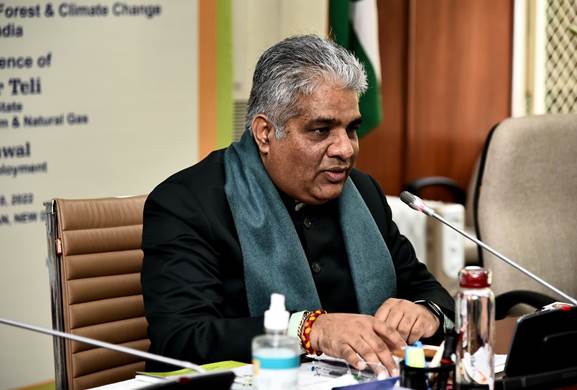 The AQEES has been taken up to provide frequent (quarterly) updates about the employment and related variables of establishments in both organized and unorganized segments of nine selected sectors which account for a great majority of the total employment in the non-farm establishments. The nine selected sectors are Manufacturing, Construction, Trade, Transport, Education, Health, Accommodation & Restaurant, IT/BPO and Financial Services.

Sharing the results, the Union Minister said that the employment is showing an increasing trend and mentioned the fact that the over-all percentage of female workers stood at 32.1, higher than 29.3% reported during the first round of QES.


Released the report on the second round (July –September 2021) of Quarterly Employment Survey (QES). Happy to note that the employment is showing an increasing trend and the estimated total employment in the nine selected sectors from the second round of QES stands at 3.1 crore. pic.twitter.com/mYLrwRYqCq

Minister of Labour & Employment emphasized that last mile delivery is the prime objective of the Government under the guidance and leadership of Prime Minister, Shri Narendra Modi, and in order to achieve this, Ministry has entrusted nationwide surveys to Labour Bureau for evidence-based policy making.

The report on Quarterly Employment Survey being a demand side survey along with supply side survey i.e Periodic Labour Force Survey (PLFS) will bridge data gaps on employment in the country, stated Shri Yadav.

The report of “Quarterly Employment       Survey” is an important publication meant to give insights into the change of employment over the previous quarters and many other related parameters. This will serve as a useful data for policy-makers, Central/ State Governments officials, researchers and other stakeholders. The report of the first round/quarter (April-June, 2021) of QES was released by Shri Bhupender Yadav, on 27th September, 2021.

Speaking on the occasion, Secretary (L&E), Shri Sunil Barthwal remarked that the registration under e-shram portal for the informal sector workers is increasing which alongwith new developments in the National Career Service (NCS) portal and QES survey results will provide national data bank for providing realistic picture of employment at all India level.

The second round of QES had a reference date of 1st July, 2021 for the different items of information about an establishment. Data were collected through field visits from 11,503 establishments, out of the 12,038 establishments selected in the sample. From the survey data, estimates of each of several aspects of the establishments were worked out by scientific methods taking due account of the sampling design.