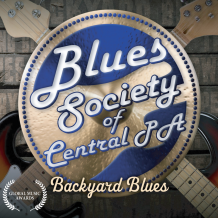 HARRISBURG, Pa. – May 4, 2021 – PRLog — Every Thursday night for more than twenty years, The Blues Society of Central Pennsylvania (BSCP) has hosted a weekly blues jam for players of all ages and skill levels to make music; America’s music – the blues.  In 2020 when the pandemic prevented live music events, BSCP was nimble in transitioning to a virtual broadcast to their Facebook group page, thus opening the doors of their event to the world.

On March 19, 2021, Backyard Blues was released on digital platforms worldwide via Blue Heart Records.  It debuted at #2 on the Roots Music Report (RMR) charts for the Top 50 Pennsylvania Albums for the week of March 6, 2021 and has consistently remained in the top 4. It has also been on the RMR Top 50 Blues Albums and the RMR Top 50 Contemporary Blues Albums charts for nine weeks. Roots Music Report is one of the main industry charts reporting blues airplay.

The nine regional bands represented on the collection are the Ben Brandt Trio, Blues On The Loose (BOTL), Bob Wineland & The House Band, Buzzard Luck, Nate Myers Trio, Gary “Rocky” Rothrock & The House Band, Rose Hudson with Barrelhouse, The Mighty Klucks, and Roger “Hammer” Franz. Every song has been on the Pennsylvania Top 50 Songs Chart at least once. To date, “A Bad Influence” peaked at #2 and “Trouble All Over The World” at #3.

Backyard Blues is a collection of 16 original songs of various blues-based styles performed by local artists and recorded at Right Coast Recording Studio, Columbia, PA in 2019.  Blues Jam Coordinator, Gary “Rocky” Rothrock co-produced the CD with the brilliant Bobby Gentilo, who recorded, mixed, and mastered it.  Three bonus tracks from award-winning artists who performed at the virtual jam during 2020 are included on the digital release as representatives of the “virtual backyard of Central Pennsylvania.”

Visit https://www.bscpblues.com for more information about the Blues Society of Central PA, Backyard Blues, the Virtual Blues Jam and membership.  Join the Facebook Group at https://www.facebook.com/groups/bscpblues to enjoy the weekly virtual jams beginning at 7:00PM EST on Thursdays.