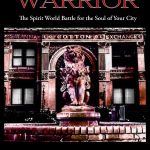 ADELAIDE BOOKS is proud to offer the latest work by Michael K. Mancha Citizen Warrior: The Spirit World Battle for the Soul of Your City hitting stores everywhere now.

Within the pages of Citizen Warrior, you’ll discover an invisible realm of spirit, vastly superior to the physical, where a life or death battle is being waged for you, your city, and nation. Michael’s writing highlights Savannah, Georgia, known as “The Most Haunted City in America” and “A beautiful woman with a dirty face”. Her intricate and intriguing history reveals a city subject to the licentious appetites of her leaders and the workings of a malevolent spirit enemy bent on her demise. Countering that has been the Divine presence, seeking to enlist the cooperation of ordinary citizens so they might walk a pathway of extraordinary purpose. Michael reveals how to identify the predetermined plan for your city, the hindrances that have robbed her of promise, and the decisive part you play in the prospering of the society. Most importantly, you’ll be handed seven keys that will unlock your potential to rise from the ranks of the victimized, to a place of empowerment and destiny as a Citizen Warrior!

Michael Mancha was born and raised in California. He has spent the past fifteen years as a resident of the Deep South, writing and working as an independent private investigator. He is the author of the novel, Three Dog Fright: The Savannah Ghost Chronicles. As a former missionary, Michael led relief teams to various parts of the world, including the former Soviet Union, Eastern Europe, and Asia. More recently, Michael co-founded 13th Colony Patriots, a political action group based in Savannah, Georgia, that has drawn national attention while engaged in timely protests in Washington, D.C. It is from this palette of first-hand experience Citizen Warrior has been conceived.