Haseena vs Karishma, who will prove to be the better S.H.O in Sony SAB’s Maddam Sir 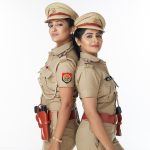 Wearing their heart on their sleeve, the four female police officers in Sony SAB’s Maddam Sir have never failed to entertain the viewers with their unique ways of policing. Having solved a number of difficult cases, all in her unique way, Karishma Singh (Yukti Kapoor)has now become the S.H.O (Station House Officer) of the Mahila Police Thana in Lucknow, alongsidethe beloved Haseena Mallik (Gulki Joshi). The police station now has two S.H.Os, with both trying to solve cases using their pole-apart ideologies.

While Karishma is the temporary S.H.O, she will leave no stone unturned to prove her methods of policing are better than Haseena’s. With the new case in police station, Karishma and Haseena have the chance to handle it in their own way. Two social media celebrities accuse each other of stealing their things and now it is upon the two S.H.Os to find out the truth. Organising a press conference of thieves, Karishma fails in finding the thief her way and now, Haseena takes it upon herself. She organisesa party where the actual thief is also expected to come, but something unexpected happens.

Will they find the thief or will their competition create a problem for the police station?

Yukti Kapoor, playing the role of Karishma Singh said, “It is going to be a lot more fun for the viewers as there will now be two S.H.Os in the police station. Karishma and Haseena have always had very distinct ideologies, trying to solve cases in their own ways and sometimes agreeing to each other’s way. However, now that Karishma has been appointed as the temporary S.H.O, she will go head to head with Haseena, trying to prove her way of solving cases to be better. Whether she succeeds or not, the upcoming episodes are going to be very entertaining for the viewers.”

Gulki Joshi, essaying Haseena Mallik, said, “Haseena believes in solving cases without violence while Karishma has an ideology completely opposite to hers. However, since Karishma is now the temporary S.H.O. along with Haseena, both of them will have to try and prove whose way of policing is better and often even adjust to each other’s ways. It will be interesting for the viewers to watch whether this competition will be a healthy one or will it lead to some problems.”