These top 4 looks of Krushna and Bharti from FMJ are a Hit! 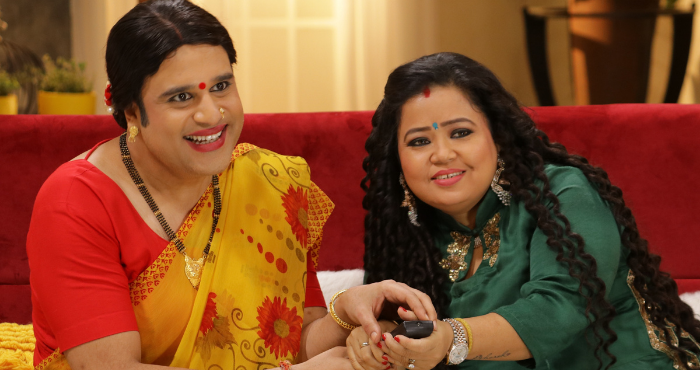 Sony SAB’s rib-tickling shot-format sketch comedy ‘Funhit Me Jaari’, led by Bharti Singh and Krushna Abhishek, continues to leave viewers in splits as the two present a parodies on various topics from across the globe. These 2-3 minute gags are the perfect serving to elevate the weekend entertainment. Every episode presents 5 hilarious gags and features the artists in new avatars. Immensely talented artistes and comedians Krushna and Bharti spilled the beans on their experience working in Funhit Me Jaari and their various eye catching looks and characters.

Bharti Singh, talking about her favorite gag, shared, “It is always a genuine pleasure working with Krushna, his comic timing and professionalism are impressive and it just adds to the delight of working with him. Although, it is difficult to pick only one gag as my favorite, as all of them pack an equal punch and delivers that rib tickling entertainment to the audience. But if I had to choose one, I would choose ‘Golu Haazir Ho’ and ‘Adventures of Rajmata (Baahubali)’. The looks have been designed with so much care and when we combine it with the hilarious script, it becomes all the more fun for the viewers. As an artiste it is always exciting to don a new look and I enjoy that Funhit Me Jaari allows that with every episode.”
Revealing his camaraderie with Bharti and his favorite on the show, Krushna Abhishek said, “It is always exciting to be working with Bharti. When I was offered Funhit Mein Jaari and was told that I will be working with Bharti, I didn’t even think twice to say yes. My most favourite gag is the Baahubali gag- Adventures of Rajmata. The interesting thing in this gag is that the looks have been worked upon so nicely and in details that it actually brings in the entire feel of the movie too. I also like CHI.I.D because Bharti is looking very cute in that as ACP.”

1. The Iconic Rajmata and Chatappa

Inspired from the legendary movie, Baahubali, Bharti and Krushna as Raajmata and Chatappa add the light hearted comical spin to the characters. The character look detailing is near to perfection which helps retain the essence of this inspired parody.

The trouble shooters, ACP and Daya in the Chii.I.D office are a duo the viewers simply can’t miss. While Krushna is seen embodying Daya’s tough looks and element at the same time its Bharti as adorable ACP who creates a much special place in the viewer’s hearts.

Welcoming the viewers to the fresh episodes are the unconventional jodi of maalkin and her maid. Krushna, a notorious maid sets the ball rolling with some his suspicious punch lines while Bharti as the maalkin is a diehard Funhit Me Jaari fan. This funny duo set the stage for the weekend dose of laughter.

‘Golu Hazir Ho’ is a funny scenario between a school principal and his extremely notorious and outspoken student Golu. The principal is in his 40s, with an experimental fashion sense, is seen wearing blinding bright clothes. A true follower of fashion influencers with a knack for experimentation. Golu on the other hand is a character aced by Bharti. Cute as the eye meets but hilariously outspoken when he speaks.
Witness Bharti and Krushna at their best and set your alarms for every Saturday and Sunday every hour only on Sony SAB