UNESCO and Royal Enfield flag off ‘The Great Himalayan Exploration’

UNESCO and Royal Enfield recently forged a unique partnership to identify, document, preserve and promote the Intangible Cultural Heritage (ICH) of India, beginning with 100 unique practices in the Eastern Himalayas

UNESCO (United Nations Educational, Scientific and Cultural Organisation) and Royal Enfield, the worlds oldest motorcycle brand in continuous production since 1901, flagged-off The Great Himalayan Exploration ride at the iconic Victoria Memorial in Kolkata. This unique partnership aims to contribute to the documentation, preservation and promotion of the Intangible Cultural Heritage of India.

India possesses a multitude of undiscovered cultural heritage practices that are passed down from generation to generation. With our partnership with Royal Enfield we want to contribute to the collective knowledge to inventory all these Intangible Cultural Heritage practices. – Eric Falt, Director, UNESCO New Delhi, at the Flag-off ceremony

As part of our social mission, Royal Enfield aims to partner with 100 Himalayan communities to build resilience and drive long lasting change. We also intend to catalyse a global movement of 1 million riders who can actively partner with us in our endeavour. Through this unique partnership with UNESCO, we are connecting our rider community with the Himalayan communities in a bid to actively identify and preserve their living heritage. – Bidisha Dey, Executive Director, Eicher Group Foundation

As part of the capacity building, the riders, including a team of more than 20 rider-researchers, began a first journey to Pattachitra Gram (Village of the Scroll Painters) in Pingla Block – a UNESCO ICH showcase, over 100 kms away in the West Medinipur District. At Pattachitra Gram, the riders were welcomed by the chitrakar community with a richly decorated atmosphere, laden with Pattachitra art and garlanded in the traditional welcome of the Chitrakar community.

As part of the experience, the team were given a tour of the village and the resource centre where the artists showcased the techniques they use to create the dyes and paint, as well as the end purpose of Pattachitra, which is its use as a prop and a backdrop in folk songs. Recognised as one of the oldest art forms in the world, the art of Pattachitra is documented by UNESCO and is handed down through generations.

After the flag-off and the ride to Pattachitra Gram, the rider-researchers will split into four groups and head towards Meghalaya, Assam and Ziro in Arunachal Pradesh. Drawn from all over the Indian motorcycle-riding community, these riders will spend two weeks documenting specific Intangible Cultural Heritage practices that have been identified by a research team in collaboration with UNESCO. This will be followed by a series of research-based rides across the Himalayan region in the next few months to document these practices

This undertaking, as part of the unique partnership between UNESCO and Royal Enfield, which was announced recently, is an attempt to document the Intangible Cultural Heritage practices of India, beginning with the Himalayas. The goal is to create a digital repository of the wealth of information that the rider-researchers will collect. Additionally, we will also use this activity as a stepping stone to Royal Enfields larger goal of partnering with 100 communities across the Himalayas to drive one toward a sustainable future.

UNESCO recently inscribed Durga Puja in Kolkata on its prestigious Representative List of the Intangible Cultural Heritage of Humanity. Known for its celebration of feminine divinity, Durga Puja is also an embodiment of inclusive festivity. A consummate expression of dance, music, crafts, rituals, culinary and cultural aspects, the festival transcends social boundaries and brings people together in celebration.

UNESCO is the United Nations Educational, Scientific and Cultural Organization. It seeks to build peace through international cooperation in Education, the Sciences and Culture. UNESCOs programmes contribute to the achievement of the Sustainable Development Goals defined in Agenda 2030, adopted by the UN General Assembly in 2015.  UNESCO established its Lists of Intangible Cultural Heritage with the aim of ensuring better protection of important intangible cultural heritages worldwide and the awareness of their significance. This list is published by the Intergovernmental Committee for the Safeguarding of Intangible Cultural Heritage, the members of which are elected by State Parties meeting in a General Assembly. Through a compendium of the different oral and intangible treasures of humankind worldwide, the programme aims to draw attention to the importance of safeguarding intangible heritage, which UNESCO has identified as an essential component and as a repository of cultural diversity and of creative expression.

The oldest motorcycle brand in continuous production, Royal Enfield has created beautifully crafted motorcycles since 1901. From its British roots, a manufacturing plant was established in Madras in 1955, a foothold from which Royal Enfield spearheaded the growth of Indias mid-sized two-wheeler segment. Riders and a passionate community are fostered with a rich profusion of events at a local, regional and international level. Most notable are Rider Mania, an annual gathering of thousands of Royal Enfield enthusiasts in Goa, and Himalayan Odyssey, a yearly pilgrimage over some of the toughest terrain and highest mountain passes.

A division of Eicher Motors Limited, Royal Enfield operates through more than 2100 stores across all major cities and towns in India and through nearly 850 stores in more than 65 countries around the globe. Royal Enfield also has two world-class technical centres, in Bruntingthorpe, UK, and in Chennai, India. With more than 37% CAGR for the last 5 years and a 108% growth in international market sales in 2021-22, Royal Enfield is the leader in the global mid-size motorcycle market.

In an important announcement, the Intergovernmental Committee of UNESCO’s 2003 Convention on Safeguarding of the Intangible Cultural Heritage has inscribed ‘Durga Puja in Kolkata’ on the Representative List of Intangible Cultural Heritage of Humanity during its 16th session being held at Paris, France from 13th to 18th December 2021. The Committee commended Durga Puja for its initiatives to involve marginalized groups, and individuals as well as women in their participation in safeguarding the element.

The Union Minister for Culture, Tourism and DONER, in a tweet said that this is a recognition of the confluence of our rich heritage, culture, rituals and practices and a celebration of the feminine divinity and the spirit of womanhood.


Durga Puja in Kolkata joins the @UNESCO Representative List of Intangible Cultural Heritage of Humanity. This is a recognition of the confluence of our rich heritage, culture, rituals & practices and a celebration of the feminine divinity & the spirit of womanhood.
Jai Maa Durga! pic.twitter.com/i4lNCfwWn7 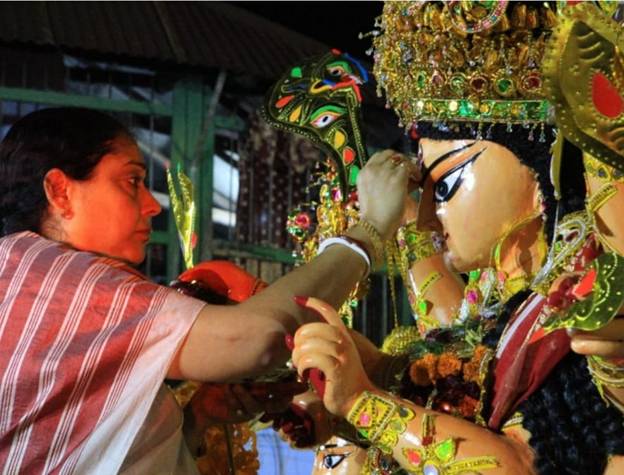 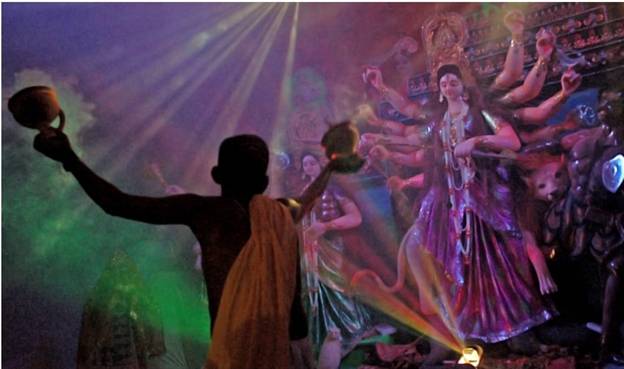 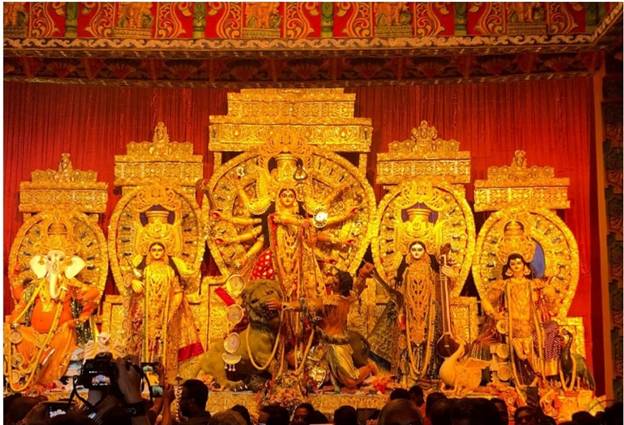 Durga Puja not only is a celebration of the feminine divinity but is a consummate expression of dance, music, crafts, rituals, practices culinary and cultural aspects. The festival transcends the boundaries of caste, creed and economic classes and joins the people together in its celebration.

With the inscription of Durga Puja in Kolkata, India now has 14 intangible cultural heritage elements on the prestigious UNESCO Representative List of ICH of Humanity. In recent years, the  ICH elements that saw inscriptions areKumbh Mela (inscribed 2017), Yoga (inscribed 2016) among others. India is a signatory of the 2003 UNESCO Convention which aims for the Safeguarding of the Intangible of theIntangible Heritage along with traditions and living expression.  Intangible cultural heritage means the practices, representations, expressions, knowledge, skills – as well as the instruments, objects, artifacts and cultural spaces associated with them that communities, groups and, in some cases, individuals recognize as a part of their cultural heritage. Furthermore, its importance is not in the cultural manifestation itself, but in the wealth of knowledge, know-how and skills that are transmitted from one generation to the next.

Speaking at the kick-off ceremony, the Secretary for the Environment, Mr Wong Kam-sing said that geopark is not only limited to geo-conservation, but also preserves the history and cultural heritage of various communities which have been handed down through centuries. “The AFCD has devoted resources in exploring the livelihood, history and culture of different communities in geopark. With the support of the local communities, the AFCD has established ‘Story Rooms’, which are visitor centres, at Ap Chau in 2018, Kat O and Kau Sai Village in 2019, and Lai Chi Wo in 2021, and published a series of books, namely ‘Same Roots • Same Origins’,” he said.

He also pointed out that Hong Kong Geopark has attached great importance to building collaboration with stakeholders, such as local communities, non-governmental organisations and relevant government departments, and promoting geopark with them in an innovative way. As the first event to celebrate the 10th anniversary of Hong Kong Geopark, stakeholders have been invited to join the Geopark Community Seminar to share their thoughts and experience to strengthen connection and collaboration.

Hong Kong Geopark became a National Geopark of China in 2009 and a member of the Global Geoparks Network in 2011. With the formalisation of the Geopark Programme by the UNESCO in 2015, Hong Kong Geopark was renamed Hong Kong UNESCO Global Geopark, and is committed to conserving geoheritage, ecological environment, cultural and intangible cultural heritage; developing diversified educational activities and boosting local sustainable development.

The AFCD will later introduce two new facilities: Kat O Heritage Trail and the revamped Lai Chi Wo Geoheritage Centre to enhance visitors’ experience and further promote local history, cultural and intangible cultural heritage. The AFCD will roll out a series of public activities in the next six months, including public talks, roving exhibitions and community fairs. Through these activities, visitors will learn more about Hong Kong Geopark from various perspectives and experience its unique geological, ecological and cultural features.

The AFCD has launched a thematic webpage for Hong Kong UNESCO Global Geopark 10th Anniversary: 10.geopark.gov.hk. Members of the public can refer to the website for details of celebration events.