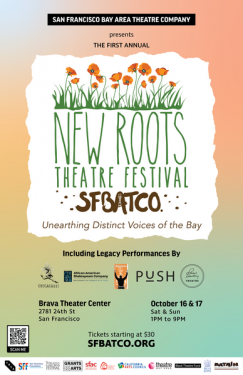 Something Old.  Something New. Something borrowed, but not blue, considering that audiences are sure to smile and enjoy performances during San Francisco Bay Area Theatre Company’s (SFBATCO) two-day “New Roots Theatre Festival.” Presented at Brava Theater Center in the historic Mission District, October 16-17, 2021, it will consist of eight performances for theatre audiences to indulge their artistic appetites.

With theater venues shut down world-wide for more than a year due to the deadly pandemic, SFBATCO co-founders Rodney Earl Jackson Jr. and Marcelo Javier have mounted a lively creative comeback. The New Roots Theatre Festival invites legacy theatre organizations and emerging artists to give voice to BIPOC creativity, bringing to life resilience, joy, diversity and stories with BIPOC POVs that are relatable to everyone.

“The whole world is a stage, but for more than a year the world of theater has been shuttered. It’s great to work in unity with these amazing arts organizations to give voice to the stories of communities that have been hit hardest by the pandemic,” said Marcelo Javier.”  The two-day festival serves as a multicultural performing arts incubator amplifying artists in the Bay Area that the world is invited to see.”

The projects representing the “new” in ‘New Roots Theatre Festival’ are Jamie Zimmer, Joanna Haigood and Laura Elaine mounting Sign My Name to Freedom: The Unheard Songs of Betty Reid Soskin; SFBATCO playwright Aidaa Peerzada’s “Shining,” a reimagined Afro-futurist take on the Greek myth of Phaeton, and  SFBATCO’s own Othello Jefferson,  Jamie Yuen-Shore, and  Christine Chung and the revival of  “I,Too, Sing America.”

The “roots” of the festival are represented by performances from the Lorraine Hansberry Theatre; AfroSolo; PUSH Dance; Cuicacalli Ballet Folklórico; and the African-American Shakespeare Company.

“It is a thrill to bring together so many talented actors and arts organizations under one roof at the Brava Theater Center in our diverse and historic Mission District of San Francisco,” said Rodney Earl Jackson Jr., co-founder of SFBATCO.  “The New Roots Festival is the perfect exclamation point for our company that began seven years ago in September 2014.  This collaboration is kind of like our country’s motto, ‘E pluribus unum’: out of the many, one.”

Along with the diversity of performances is the diversity of selection.  Each project is paired with another into a uniquely themed “Performance Block.” Theater goers can create their own theatrical experience by mixing and matching the “Performance Blocks” they want to see. Get the closest equivalent to binge-watching outside of your home with live actors all for the price of $30 for a Two-Block Package (4 projects) or $50 that indulges you with the entire festival Four-Block Package (8 projects).  For specific ticket information click this link: https://www.sfbatco.org/schedule.