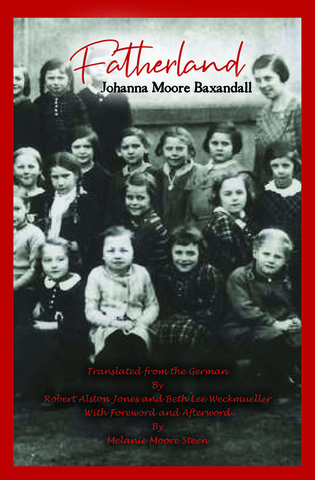 Fatherland, a new book by Johanna Moore Baxandall, translated by Robert Alston Jones & Beth Lee Weckmueller, with a forward and afterword by the author’s daughter Melanie Moore Steen, has been released by Dorrance Publishing Co., Inc.

An artfully crafted narrative of child-and-young womanhood in Germany during the Nazi regime. The author, daughter of a beloved, often persecuted Communist father, exposes the conflicted and complex psychology of her early years navigating the political climate of the Third Reich.

Johanna Moore Baxandall was born in Germany in 1928. World War II in Nazi Germany took the life of her father, a member of the resistance. She would later marry an American soldier and move to the U.S. in 1948. Before then though, she grew up in the Germany of the Third Reich.

Fatherland is the story her life before America.

Fatherland is a 178-page paperback with a retail price of $15.00 (eBook $10.00). The ISBN is 978-1-6495-7148-9. It was published by Dorrance Publishing Co., Inc of Pittsburgh, Pennsylvania. For members of the press, to request a review copy, visit our virtual pressroom at http://dorrancepressroom.com or to buy the book visit our online bookstore at https://bookstore.dorrancepublishing.com/fatherland/