The National Commission for Women (NCW) has signed an MoU with Bureau of Police Research and Development (BPR&D) for gender sensitization of police personnel across the country. The programme was launched by NCW Chairperson Ms Rekha Sharma, Director General, BPR&D Shri VSK Kaumudi, ADG Shri Neeraj Sinha and DIG Training Vandan Saxena in the BPR&D Headquarters, Mahipalpur Delhi. The MoU between the two organisations was signed in the presence of Members and officials of the Commission. The objective of the programme is to ensure gender sensitization of police personnel with respect to legislation and policies concerning women and bringing attitudinal and behavioural changes in police officers while dealing with crimes against women. The Commission has been regularly organising gender sensitization programs for police officers to achieve the objective of building trust of women complainants in police. It is with this objective that NCW has decided to launch a programme across the country to sensitize officials on gender related issues and empower them to perform their duties effectively, without prejudice and bias especially in cases of gender-based crimes.

In her address, NCW Chairperson said women victims are differently placed than their male counterparts due to several socioe-conomic factors and therefore there is need for police to act in a gender sensitive manner in all cases relating to violence against women. “In order to develop the required skills and attitude in police officers for dealing with cases of violence against women more effectively, it is imperative that all State police organizations undertake suitable initiatives, including organizing training programmes to sensitize the police personnel at all levels,” said Ms Sharma. 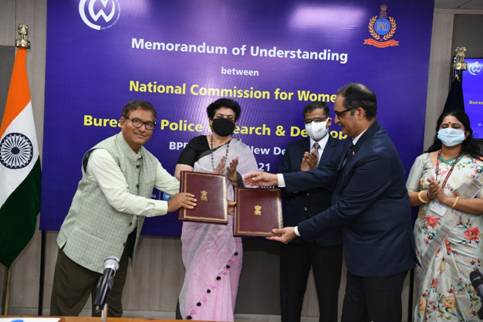 Speaking on the occasion Director General, BPR&D, VSK Kaumudi, said that signing of MoU between NCW and BPR&D marks the beginning of a new phase of collaboration for sensitization of police personnel towards women safety. The programme which aims to sensitize police personnel on gender issues will be fully sponsored by the Commission and facilitated by BPR&D with a special module in coordination with its units and other stakeholders.

The training will be conducted for a duration of three-five days, preferably in residential mode as a short intense course with an expected training of 18-24 hours in total. It will have special focus on gender issues, women related laws, role of implementing agencies along with sharing of best practices.

National Commission for Women is the apex national level organization with the mandate of protecting and promoting the interests of women under the aegis of Ministry of Women and Child Development, Govt. of India.