National Commission for Protection of Child Rights (NCPCR) in collaboration with Narcotics Control Bureau (NCB) conducted a National review cum Consultation on “Roll out of Joint Action Plan” in the States, here today. This Joint Action Plan is a policy document prepared based on various laws, regulations, policies and programmes that are already in place. It is an initiative to prepare a convergent platform for action at various levels starting from School, District to State wherein actions are indicated for various departments and authorities to implement. The Joint Action Plan was prepared by the NCPCR & NCB and released on 9th February, 2021. In first phase, the Joint Action Plan has been rolled out in 272 vulnerable districts identified by the NCB and Ministry of Social Justice & Empowerment. NCPCR has started monitoring the implementation from April, 2021 and District-wise review meeting was held virtually in July-August, 2021. 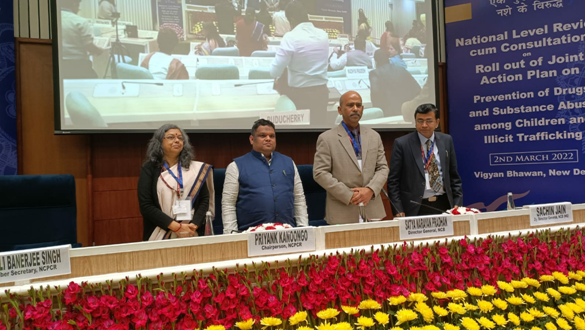 Shri Satya Narayan Pradhan, DG, Narcotics Control Bureau (NCB) in his inaugural address mentioned about some of the special initiatives of NCB i.e., running an online e-pledge through mygov.in to spread awareness against drugs especially among the youth of the nation. Till date more than 14 lakh people have taken this virtual pledge against drugs. He hoped that till 15th August, 2022, i.e., the 75th anniversary of India’s independence at least 75 lakh people would have taken the e-pledge. He requested all the participants to take this e-pledge and also make others aware of the same. NCB along with NCPCR, through social media platforms, has undertaken the task of streaming celebrity video messages on JAP – ‘Ek Yudh Nashe ke Virudh‘. Further, he suggested for the creation of a mechanism for co-ordinated action between 8,000 Nasha Mukt Bharat volunteers, who are presently working in 272 vulnerable districts alongside NCB and State Police officers in performing the stated objectives of the campaign.

Shri Priyank Kanoongo, Chairperson, NCPCR in his address stated about the background of preparing the Joint Action Plan. He mentioned that the Prime Minister takes a keen interest in the issues related to children and personally monitors the programmes and activities meant for children. He had expressed his concerns about the drugs & substance abuse amongst children and directed NCB and NCPCR to undertake a joint initiative involving all the authorities and stakeholders. He stressed that awareness and sensitization is crucial for preventing drugs.

In this review meeting, States made their presentations on the progress made on different indicators provisioned under the JAP. During the review, focus was laid on the strict implementation of the provision of installing CCTV cameras in the chemist shops selling Scheduled X & H drugs, tobacco free zone of the school areas, awareness, and roles to be played by all the stakeholders. The participants agreed to implement this Joint Action Plan in all Districts of the Country.