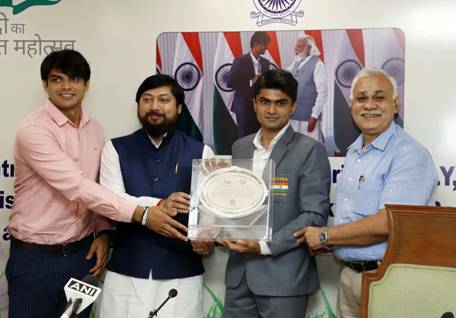 Union Minister of Youth Affairs and Sports, Shri Anurag Thakur in a video message called upon all the civil servants to put in their best for encouraging sports in the country while doing their duties as civil servants. He said that Suhas L.Y. has made the country proud by winning Silver medal in Tokyo 2020 Paralympic Games. The unprecedented success at the Tokyo Olympics and the Paralympic Games have generated enormous enthusiasm and interest amongst the citizens and this will impact the future of sports in the country.

Shri Anurag Thakur suggested in his message that everyone should follow some sports activity beyond his/her regular duty for making New India as Fit India as per the dream of Hon’ble Prime Minister. He said that nation is proud of the achievement of our players who won 19 medals in Tokyo 2020 Paralympic Games and 7 medals in the Tokyo Olympic Games 2020.

Union Minister of State of Youth Affairs and Sports, Shri Nisith Pramanik, while addressing at the event highlighted the renewed focus on excellence in sporting activities and said that the Central Government is fully dedicated to encourage sports. He said that under the able leadership of Prime Minister Shri Narendra Modi, the Union Ministry of Youth Affairs and Sports has launched many schemes and the positive results of these schemes will be visible in near future. Currently the nation is celebrating Azadi ka Amrit Mahaotsav and we should consider how to create best ecosystem where sports activities get adequate attention and support, thereby enabling India to achieve a much better position in the world of sports.

The Minister said that due to the excellent performance of Indian players at the Tokyo Olympics 2020 & Tokyo 2020 Paralympic Games and Prime Minister Shri Narendra Modi’s policies and his far-sighted vision on promoting all types of sports, the interest of Indian youth in sports has increased manifold. And now, young sportspersons like Shri Suhas L.Y and Shri Neeraj Chopra have become brand ambassadors of Swasth Bharat- Fit India campaign in the country, he added.

Shri Pramanik said that we are gathered here to felicitate a person who not only has done remarkable work as a civil servant but also brought laurels to the nation with his excellent performance in Badminton at Tokyo Paralympic 2020. Shri Suhas has proved that with strong will and hard work one can achieve anything in life.

President IAS Association and Secretary, Ministry of Housing and Urban Affairs, Shri Durga Shanker Mishra while congratulating Shri Suhas Lalinakere Yathiraj said that his achievements as a civil servant and as a sportsperson is a shining example for all the civil servants to follow. He said that his dedication in pursuing sports while discharging duties as a civil servant is exceptional and the entire nation has appreciated his excellent sporting performance. Shri Mishra said that a career in the IAS is a great opportunity to do service to the nation and all members of the Service should come forth and build an ecosystem which promotes excellence in sports.

Shri Suhas LY IAS and Silver medalist in Tokyo 2020 Paralympic Games said that every defeat shows the pathway to winning in life and what a person needs in order to win is a passion for doing the best he can. He gave credit for his achievement to all who have stood by him during his campaign. He was accompanied by his wife Smt. Ritu Suhas on this occasion.

Shri Neeraj Chopra Gold medalist at the Tokyo Olympic Games 2020 was the Guest of Honour on the occasion. In his address, Shri Chopra highlighted the importance of self-discipline, hard work, sincerity and goal oriented preparation. He said that each IAS officer is an achiever who can give some time and attention to playing sports as well as promoting sports. He thanked the IAS Association for this opportunity to be present when a great sportsman like Shri Suhas LY was being felicitated.

Suhas Lalinakere Yathiraj is an IAS officer of the 2007 batch of Uttar Pradesh cadre who is presently serving as District Magistrate of Gautam Buddha Nagar.

Suhas was born to Yathiraj L K(late) and Jayashree C S in Hassan, Karnataka. His early schooling happened in Dudda near Hassan district. Since his father was a government servant, he had to travel and move with father during his postings at different places. He did most of his secondary education in DVS independent college Shivamogga, Karnataka. He graduated from National Institute of Technology, Surathkal, Karnataka in Computer Science and Engineering branch in 2004 by scoring First class with Distinction. He has also served as the District Magistrate of Prayagraj. He became National Champion after winning Gold Medal in Men’s Singles category at 2nd National Para Badminton Championships held at Varanasi in March 2018.