Netaji lived, lives and will continue to live in the Hearts of Indian People: Dr. Anita Bose Pfaff

Dr. Anita Bose Pfaff, daughter of Netaji Subhas Chandra Bose who joined the webinar from Germany, said that Netaji lived, lives and will continue to live in the hearts of Indian people. Though her father Netaji was a devout Hindu but he  had respect for all the religions. Dr. Anita said that her father dreamt of an India where all religions coexist peacefully. She said that Netaji was a champion of gender equality. His vision was to build a nation where men and women not only have the same rights but can also deliver same duties. It is on the women themselves to emancipate, women should win and they can win. Dr. Anita Bose also gave a detailed description on the life and contribution of Netaji Subhas Chandra Bose in the freedom struggle and nation building. She said that Netaji had a vision for financial and economic strength of India and had set up a planning commission even before India got independence.

Ms. Renuka Malaker, the grandniece of Netaji Subhas Chandra Bose, former Secretary General and currently Trustee of Netaji Subhash Bose INA Trust Delhi-India, said in her address that Netaji had extreme love for his countrymen. Youth of India are its future. She urged that the youth should keep the nation uppermost in their minds and if it happens no one can stop India from progressing.

While elaborating on the life of Netaji Subhas Chandra Bose, Senior journalist and writer Sh. Mahesh Chandra Sharma said that as Netaji gave top most priority to the nation, youth should also strive for the nation which is united, powerful and free from religious and cast based discrimination. He said that the dedication of Netaji Chandra Bose towards the nation remain the inspiration for the youth in India.

Earlier in the webinar, Dr. Pragya Paliwal Gaur, Additional Director General (Region) PIB delivered the inaugural and welcome speech. Dr Paliwal first welcomed and thanked Dr. Anita Bose Pfaff, daughter of  Netaji, for giving her precious time and it was an honor to have her and Ms. Renuka Malaker in the webinar of Press Information Bureau.  She said that in order to honor and remember Netaji’s indomitable spirit and selfless service to the nation, Govt of India has decided to celebrate his birthday on the 23rd day of January every year as “ParakramDiwas” to inspire people of the country especially the youth.

The webinar was attended by more than 200 participants which included soldiers of BSF, cadets of NCC, young volunteers of  Nehru Yuva Kendra Sangathan and other officials from various part of the country. In the end, a video made by the Ministry of Information &Broadcasting on role of Netaji Subhas Chandra Bose in the freedom struggle of India was also played during the webinar. Sh. Pawan Singh Faujdar, Deputy Director PIB Jaipur, conducted the webinar.

Correlations between waves in atomic systems or spin coherences are long-lived at ultralow temperatures, says a new study by scientists who have developed a new technique to measure it. A system with long-lived spin coherences is a better resource as quantum computer. It allows quantum operations and logic gates to be more efficiently implemented so that the system becomes a better quantum sensor compared to systems where coherence is short-lived.

This newly explored property of atomic systems at low temperature can be exploited for efficient quantum sensing and quantum information processing for application in quantum computation and secure communication. The newly discovered technique can help study the real-time dynamics of quantum phenomena such as quantum phase transitions in a non-invasive manner.

Spin is a fundamental quantum property of atoms and elementary particles such as electrons and protons. As atoms are cooled to lower temperatures, their quantum nature is manifested more prominently. However, while the spin degree of freedom is a highly discussed topic, especially in the context of quantum information processing, the dynamical measurements on spins at ultralow temperatures were not available. This is because most of the detection techniques in cold atom experiments are destructive and disturbs the atomic sample during detection.

A team of Scientists from Raman Research Institute, Bangalore, an autonomous institute of the Department of Science & Technology, Govt. of India, have measured the spin properties of atoms cooled to micro-Kelvin temperatures using the new method they have devised. Quantum properties dominate over everyday classical observations at this temperature –- very near absolute zero temperature, and it is for the first time that spin dynamics have been detected at this temperature regime using polarization fluctuation measurements.

With the new technique, the scientists measured the properties of spins and lifetime of an atomic spin state with a million-fold improvement in detection sensitivity compared to the existing technology. They proved that spin coherence at this low temperature is long-lived.

In this work led by Sanjukta Roy, Dibyendu Roy, and Saptarishi Chaudhuri and co-authored by Ph.D. students Maheswar Swar and Subhajit Bhar from RRI increased signal strength of spin noise by a million-fold by using coherent laser drive. They made the spin noise spectroscopy technique usable for spectroscopists measuring systems where signal level is too low to detect. The research has been published in the journal Phys. Rev. Research. The work has been financially supported by funding from DST (Department of Science and Technology) and MeitY (Ministry of Electronics and Information Technology).

According to the RRI team, this work derives its original motivation from Nobel laureate Sir C V Raman’s seminal work on light scattering. They used laser cooling techniques to cool down the neutral atoms near absolute zero temperatures and used laser light to coherently drive quantum transitions in these cold atoms and a polarimetric detection technique to precisely detect the spin dynamics in these atoms. Eventually, they determined the lifetime of the spins in cold atoms and found them to be long-lived – nearly a millisecond, which is at least a thousand times more than the spin lifetime of the atoms at room temperature. The RRI team explained the observations with the help of a theoretical framework based on advanced quantum mechanical concepts.

“In this novel technique, the spin-dynamics of the atoms could be detected at the single-atom level instead of the bulk properties detected using available techniques,” the RRI team said, explaining the importance of the new technique. 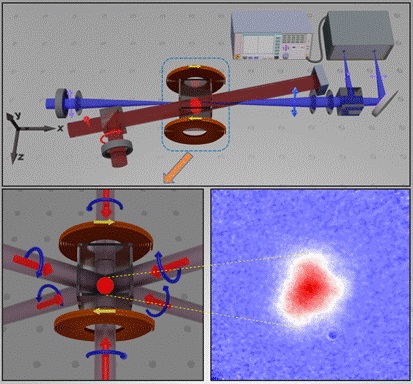 For more details, Saptarishi Chaudhuri (srishic@rri.res.in) can be contacted.