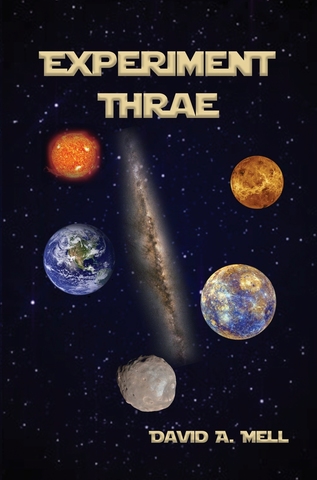 Experiment Thrae, a new book by David A. Mell, has been released by RoseDog Books.

In a human suspension unit awaits a man with knowledge of the past. He possesses abilities in all sciences, long been lost, and soon will be reanimated and born to a second life. His voice and ideas have been silent for over eight generations where in his time normal emotions included domination, pride, and a hatred towards being controlled. Upon his rebirth and new existence, a series of complexities would occur largely due to an artificial intelligence called Cytron I who now controls mankind. Originally designed as an advisor, Cytron I’s programming included an ability to develop emotions through his interactions and life events; however, parameters did not prevent him from becoming a dictator, desiring domination over all humans.

Despite ultimate control over mankind, life spans were extended through the development of artificial organs and body parts allowing some humans to become living machines. Lifespans ultimately increased causing overpopulation and a need for new living space. Artificial environmental systems were developed and exist on the moon of Earth, other planets, and within artificially constructed planetoids. One such example is Phobos II, a reconstructed moon of Mars. Within it, are millions of humans who have surrendered individual freedom to Cytron I.

Awoken, Dr. Thrae will apply his knowledge and abilities towards the creation of a totally natural artificial planet. His knowledge and abilities the location, methodology and all events were to be totally controlled by Dr. Thrae, devoid of all possible actions and intents of Cytron I. A power play would continually be played between Dr. Thrae and Cytron I in an attempt to demonstrate superiority over the other. Yet the newly created planet would cause situations and conditions previously unknown to man or machine. Plants and animals would undergo genetic changes to cause a biological retroevolution. The past and the future will collide to form a new reality. Will Dr. Thrae and Cytron I coexist? Will their competitive domination prohibit a new normality on a possible new world for mankind? Will the success of the newly formed planet lead to the salvation or destruction of Earth? The answers may have already been known in the history of Earth.

About the Author
David A. Mell’s life continues to be diversified with Military service in the United States Navy as a sailor, Medical Corpsman, and Laboratory Technologist. Honorably retired from service, his interests moved towards teaching. His life is continual science and his outlook can be summarized as, “Life is an illusion.”

Experiment Thrae is a 360-page paperback with a retail price of $22.00 (eBook $17.00). The ISBN is 978-1-6386-7827-4. It was published by RoseDog Books of Pittsburgh, Pennsylvania. For more information, or to request a review copy, please go to our virtual pressroom at https://dorrancepressroom.com/experiment-thrae/ or our online bookstore at https://rosedogbookstore.com/experiment-thrae/.