Robust inter-ministerial coordination and cooperation is the need of the hour in paving a strong path for the development of technical textiles market in India: Smt. Darshna Jardosh

The Ministry of Textiles in collaboration with Indian Chamber of Commerce (ICC) organized the Technical Textiles Conference on 23rd August 2022 in Imphal, Manipur. The Conference was inaugurated by the Chief Guest Shri N. Biren Singh, Chief Minister of Manipur and the Guest of Honour Smt. Darshana Vikram Jardosh, Union Minister of State for Textiles and Railways and the Distinguished Guests Smt. Nemcha Kipgen Minister for Textiles, Commerce and Industry Department and Co-operation Department, Government of Manipur. The conference focused on technical sessions related to Application and Usability of Geotextiles and Agrotextiles. The conference was participated by over 150 participants comprising of Officials and Representatives from Government of Manipur, Indian Army, Line Ministries and Departments of the Central Government, Eminent Industrialists from India and Research Associations. 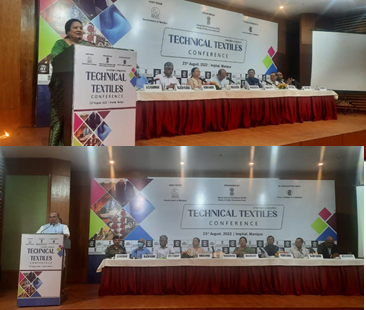 Talking about the various initiatives and schemes of  Ministry of Textiles including PLI for Textiles, PM MITRA and NTTM to transform from a traditional cotton-based textiles hub to a technical textile and MMF hub in the world,  the Minister said, “the Gati Shakti model provides that necessary impetus to States for undertaking infrastructure project with minimal approvals and permissions’’. The ease of doing business, business opportunities and investment ecosystem have grown significantly under the guidance of the Hon’ble Prime Minister of India in the last few years, she further highlighted.

Smt. Jardosh  also mentioned that from a Net-importer of PPE kits and masks to the 2nd biggest exporter, India has dramatically expanded its capabilities in medical textiles as well. From indigenous development of Carpets to Airbags to defence outfits to PPE Kits, India holds the production and export capabilities in becoming an Atma-Nirbhar nation in the segment. Another major crucial component to focus for development of technical textiles market is robust skilling and training wherein INR 400 Crores have been allocated under the NTTM scheme, she added.

She encouraged the officials of the Government of Manipur to promote the usage of geotextiles and agrotextiles’ products through their respective departments.

Speaking at the Inaugural session of the conference, Shri N. Biren Singh, Chief Minister of Manipur highlighted that the Manipur holds unique and tremendous possibilities in usage of technical textiles, particularly geotextiles, across its roads and railways, especially in the Imphal to Mao region of the state. The Geotextile technology is already in use in the railway tracks at Imphal – Jiribam Line in Manipur. He added that North-eastern states, especially Manipur, are prone to heavy rainfall throughout the year leading to flooding, landslides and soil erosion thereby creating opportunities for usage of geotextiles.

He emphasized that the Government and Industry stakeholders should prioritize on understanding the need of the state and requested officials and industrialists to visit the state for identification of unique infrastructure opportunities. Under the vision and guidance of the Hon’ble Prime Minister, the state of Manipur has changed substantially in the last five years, he further added.

The Chief Minister also requested the Central Government to establish dedicated teams to manage the development of roads along the Imphal – Jiribam region and Imphal – Dimapur region for ease in logistics and transportation in the state. He invited eminent industries to the state to capitalize on the accelerating growth in the areas of agriculture, sports, infrastructure, handicrafts.

Smt. Nemcha Kipgen Minister of Textiles, Commerce and Industry Department and Co-operation Department, Government of Manipur highlighted the importance of technical textiles in India, especially in the North-East region, which has grown significantly as one of the sunrise sectors. She said the usage of technical textiles will grow in future with application usage in Agriculture, Forestry, Railways, Horticulture, Roadways, among others.

It is high time to promote technical textiles widely in construction projects in improving the quality of infrastructure segments, especially geotextiles. Geotextiles can be instrumental for the betterment of economic life of Manipur as well as other North-Eastern States, She added.

Shri Giridhar Aramane, Secretary, Ministry of Road Transport and Highways said that the Government has been consistently creating 30-40 Kms of road in the last 3 years which has provided ample opportunities for the usage of geotextiles. With the usage of geotextiles, roads are constructed quickly, optimally, and qualitatively. .Usage of Geotextiles to increase the life of pavements by 30-50 years, he added.

Shri Armane stated that on 14th December 2020, the Ministry of Road Transport and Highways brought out a circular emphasizing on the use of technology in construction of roads, with a dedicated section on use of geosynthetic products for construction of National Highways and other structures. Various codes and standards have been developed for utilization of different geotextiles for road development, embankment, etc., he highlighted.

Geotextile Products which are used in the Ministry projects include Woven and Non-woven geotextiles, Biaxial and Multiaxial Geogrids, Geocells, Geonets and Geocomposites, etc for reinforcement for pavements, stress-relief for slopes, barriers, separation, filtration, drainage, protection and stabilization. Most of the Geotextile products are manufactured in India, he further added.

Ministry of Road Transport and Highways are also conducting various studies related to Geosynthetics, Geogrids, Geonets, Natural fibres etc. with premier institutes of India including IIT Hyderabad and IIT Chennai. Industry, Academia and Government should work together in widening the utilization of Geotextiles in India. He suggested that a  collaborative event between Ministry of Textiles and Ministry of Road Transport and Highways may be envisioned wherein Manufacturers and Contractors can come together to address the existing challenges.

There was a   presentation on  the components of the National Technical Textiles Mission (NTTM) scheme by Shri Rajeev Saxena, Joint Secretary, Ministry of Textiles. He emphasized on the four components of the scheme including Research, Development and Innovation; Skilling, Training and Education; Promotion and Market Development; and Export Promotion.

Various initiatives have been undertaken under the scheme including sanctioning 31 research projects worth INR 108 Crores in the areas of Specialty fibres and Geotextiles; developing 31 new HSN codes dedicated to technical textile products; and developing 500+ standards in collaboration with BIS, among others.