No Change of Guard Ceremony on October 9

The Change of Guard Ceremony will not to be held on this Saturday (October 9, 2021) due to the State Visit of the Prime Minister of the Kingdom of Denmark. This Ceremony will resume from October 16, 2021, on every Saturday (except on government holidays) between 0800 a.m. and 0900 a.m.

In a swift operation, the Indian Coast Guard (ICG) team at Mandapam, Tamilnadu seized two tonnes of sea cucumber, a banned marine species. Working on a tip-off about illegal transhipment of sea cucumber in the wee hours of 19 Sep, the ICG team swung into action and tracked the suspect boat involved in likely smuggling. ICG teams were deployed in Gulf of Mannar and Palk Bay areas to effectively cordon the likely escape by sea route. 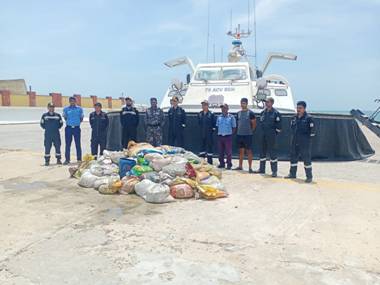 Subsequently, the boat was found anchored about 15 kms off Vedalai South of Mandapam without its crew at 10.30 am on Sunday and boarded by team of Coast Guard. The boarding team of ICG Hovercraft H-183 recovered 200 gunny bags of sea cucumber weighing 2000 kg.  The boat alongwith seized sea cucumbers was brought to Mandapam near Rameshwaram, Tamilnadu and handed over to forest Officials. The value of seized sea cucumbers is reported to be about 8 Crores INR. 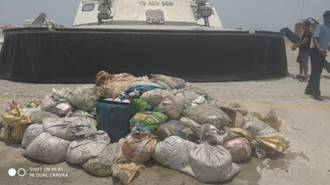 On investigation, it was revealed that the consignment was planned for transhipment across the International Maritime Boundary Line during dark hours. Sea cucumbers are in high demand in China and Southeast Asia. It may be recalled that earlier in the month of July, Coast Guard team at Mandapam had seized about 1200 kg of sea cucumber and apprehended two personnel. 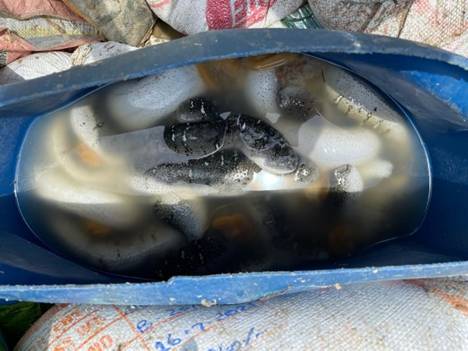 Sea cucumber in India is treated as an endangered species listed under schedule I of Wildlife Protection Act of 1972. It is primarily smuggled from Tamil Nadu to Sri Lanka in fishing vessels from Ramanathapuram and Tuticorin districts.

PUMA today announced the signing of Killian Hayes, one of Frances most promising young athletes, who will serve as a global ambassador for the brand. The Detroit Pistons NBA player becomes PUMAs first mens basketball ambassador in France, which is part of PUMAs plan to grow its basketball roster worldwide.

Killian Hayes, born in Florida, has spent majority of his life growing up in France where his father played basketball professionally. Killian who identifies as a Franco-American player, has made a name for himself in the U.S., when he was selected seventh overall in the 2020 NBA Draft by the Detroit Pistons. He currently holds the accolade as the highest drafted Frenchman in the history of the NBA.

PUMA returned to basketball in 2018, introducing a new wave of PUMA basketball athletes who are known for their play on the court and their personal style. Hayes will help heighten the brands presence of basketball in France through several activations and projects. He will be wearing various PUMA Hoops styles including the new Fusion Nitro Spectra.

Indian Coast Guard (ICG) rescued five fishermen from fishing boat MFV ‘Kalamma’, which was in distress off Bomilla Creek near Hutbay on 09 May 2021. The ICG Regional Headquarters at Port Blair received an unregistered Distress Alert Transmitter (DAT) alert from DAT ID-85068 at around 1100 hrs. On receipt of information, the ICG promptly launched search and rescue operation and sailed out Coast Guard Ship C-412 from Hutbay for investigation and assistance. Since the alert was activated from an unregistered DAT, the details of the boat and its owner were not available with the ICG. The information was immediately shared with Fisheries authorities with a request to provide the details of person/boat issued with said DAT.

Braving rough seas and strong winds, at around 1430 hrs, the Coast Guard Ship successfully located the distressed boat and provided the boat crew with basic necessities and first aid. The boat had sailed from Junglighat on 03 May 2021 for fishing. While fishing in Bomilla Creek, during night on 08 May 2021, the boat got toppled due to high swell and inclement weather and its engine got damaged due to ingress of salt water.  The boat was taken under tow by Coast Guard Ship C-412 and was brought to Hutbay at around 1945 hrs on 09 May 2021. All five boat crew members are reported to be safe and healthy. The boat alongwith its crew was handed over to local police at Hutbay for further formalities.

The instant case highlights the importance of carriage of DATs by fishing boats and its effectiveness in saving lives at sea. ICG at various forums, has been highlighting the significance of registration of DATs by fishermen for effective SAR response.  Such successful search and rescue (SAR) mission reinforces the trust and confidence of the fishermen on the ICG as a leading SAR agency. Today, the Canadian Coast Guard welcomes 37 new officers to our ranks. Despite the significant challenges posed by COVID-19, each of these new officers has persevered and mastered the skills necessary to serve Canadians across the country, and ensure that the Coast Guard stands ready to respond to incidents on our waterways.

Sydney, Nova Scotia – For almost six decades the Canadian Coast Guard has been working to ensure mariners on Canadian waters are safe, the health of Canada’s marine environments is protected, and goods can move safely and efficiently  keeping the Canadian economy strong.

Every year, the Canadian Coast Guard welcomes new officers graduating from the Coast Guard College who are ready, willing, and able to perform these critical duties with professionalism and honour.

Today, the Canadian Coast Guard welcomes 37 new officers to our ranks. Despite the significant challenges posed by COVID-19, each of these new officers has persevered and mastered the skills necessary to serve Canadians across the country, and ensure that the Coast Guard stands ready to respond to incidents on our waterways.

These new officers have graduated from an extensive four-year officer training program at the Canadian Coast Guard College in Sydney, Nova Scotia. During their studies, students learned the necessary engineering and navigation competencies needed to work on Coast Guard ships or in Coast Guard facilities.

The Canadian Coast Guard would like to take this opportunity to welcome our newest officers who are about to join their CCG colleagues in making positive contributions to the communities in which they live and work.

“During these challenging times, it is so encouraging to see 37 new graduates embark on a career with the Coast Guard. Thank you to the Class of 2021 for all your hard work and dedication. You have chosen a career of service, and I thank you for everything I know you will do to keep mariners safe, and to protect Canada’s waterways and coastlines.

Congratulations, and welcome to the Canadian Coast Guard.”

– The Honourable Bernadette Jordan, Minister of Fisheries, Oceans and the Canadian Coast Guard

“As a graduate of the Canadian Coast Guard College, I know very well the amount of work each of you undertook to get to where you are today. This was no small undertaking, and each of you have excelled under difficult circumstances – you should be proud. I want to personally congratulate each of you on your success, and welcome you to the Coast Guard fleet.”

“On behalf of myself, and all of the College staff, Congratulations! As you take up your permanent positions across Canada, you will bring your valuable skills and talents to the communities you will serve, and they will benefit from them. Your success at the College has proven beyond doubt that you exemplify the values and skills that are essential to the continued success of the Canadian Coast Guard.”