The Minister of State for Steel and Rural Development Shri Fagan Singh Kulaste reviewed the performance of Manganese Ore (India) Limited (MOIL), a schedule ‘A’ CPSE under Ministry of Steel and understood the future plans of MOIL yesterday at Balaghat. He  expressed his satisfaction at the progress done by the company especially in pandemic times and advised the company for progressive growth in order to cater to India’s domestic needs. 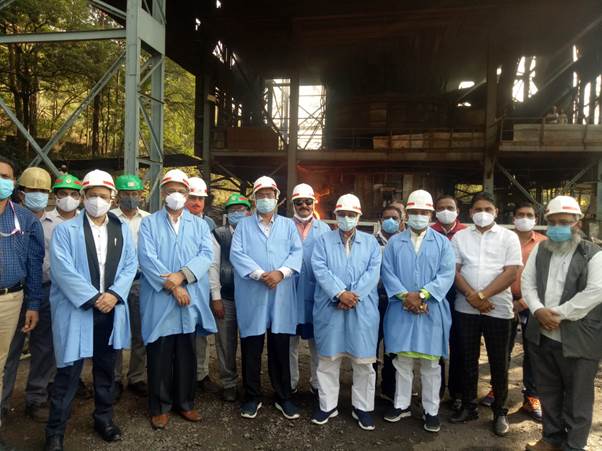 Shri Kulaste was accompanied with State Minister of Ayush Department – Shri Ram Kishore Kanware and Balaghat legislator Shri Dalsingh Bisen at Balaghat Mines of MOIL. CMD MOIL,s Shri M.P Chaudhari welcomed them. Shri Kanware and Bisen appreciated the company’s performance inspite of not being able to work for 2 months due to Covid-19 gudielines and mentioned that MOIL ensured that production did not suffer in the remaining quarters. They also viewed the facilities provided to staff and workers and were glad to see the wave of happiness amongst MOILians after successful implementation of new wage agreement.

Shri Kulaste took a tour of underground mines and specially reviwed the Ferro Managanese plant of Balaghat. Shri Kanware thanked and expressed the support of the state government for setting up the new plant which is an added feather in MOIL’s growth.