Indian Scientists have developed a method to produce hydrogen with high purity (99.99%) from methanol-water mixture at ambient pressure and temperature that uses only one-third of the electrical energy required in water electrolysis.

With near-zero or zero end-use emissions and continually replenished fossil fuel resources, hydrogen can be an ideal sustainable energy carrier and would play an immense role in the near future. Hydrogen is gaining much attention due to its high specific energy value of 40 kWh/kg as compared to chemical fuels like gasoline, diesel, liquid petroleum gas (12-14 kWh/kg). The most abundant raw material containing hydrogen is water. It is also present in natural gas, petroleum, and biomass, and they can form the source for generation of hydrogen.

Water electrolysis and reformation of hydrocarbon like methane are common methods for production of hydrogen. For India’s energy transition to clean fuels, adoption of green hydrogen from renewable energy, integrated water electrolysis process to generate energy would bring in significant benefits.

Scientists at the International Advanced Research Centre for Powder Metallurgy & New Materials (ARCI), an autonomous institute of the Department of Science & Technology, Govt. of India, have developed a method which combines both the processes of electrolysis and reformation to produce hydrogen from methanol-water mixture by electrochemical methanol reformation (ECMR) at ambient pressure and temperature. The main advantage of this process is that the electrical energy needed to produce hydrogen is 1/3rd of water electrolysis (Practical water electrolysis requires 55-65 kWh/kg of hydrogen). This technology has been patented by ARCI (Indian Patent 338862/2020 and 369206/2021).

In the ECMR process, which uses polymer electrolyte membrane (PEM), hydrogen can be produced at a lower temperature (25-60oC) and pressure, unlike chemical reformation. Hydrogen separation or purification steps are not required since it is being well separated from CO2 by polymer membrane used in the system. ARCI team is working on this technology and have developed an electrolysis unit of upto 5.0 kg/day capacity to produce hydrogen. The corresponding energy requirement for the electrolyser stack is around 17 kWhr/kg. The hydrogen thus produced by ARCI is highly pure (99.99%) and can be directly used in PEM fuel cells to generate power of about 11-13 kW.

The core components of the PEM-based ECMR electrolyser stack were fabricated indigenously and integrated with other components in the system. The electrolyser stack was fabricated using exfoliated graphite material as reactant flow field plate. Use of carbon materials as bipolar plates has been one of the significant achievements in replacing the titanium plates, which is otherwise normally used in electrolyser unit assembly, offering a conservative cost-benefit.

ARCI team has developed the indigenous process for fabricating the core components like Membrane Electrode Assembly (MEA), bipolar plates, and several process equipments. This method will significantly reduce the hydrogen cost compared to the water electrolysis method and can be easily integrated with renewable energy sources. ARCI is working with industry partners for integration with renewable energy sources like PV. 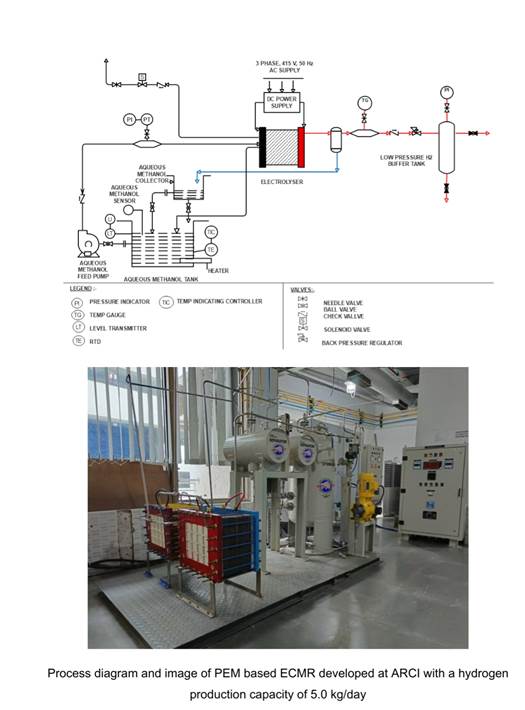 
Develop a Consciousness of Social Justice With Carl E. Moyler’s Book “On Freedom and Revolt,” a Book on Martin Luther King Jr. and Albert Camus

Everyone can join the ranks of Albert Camus and Martin Luther King Jr. in helping to bring about reconciliation among all people and the lessening of suffering for all. Carl E. Moyler”

People  especially those who are most socio-politically active  know they are living in interesting yet very disruptive times, with issues of social justice, equality, equity, and fairness often conflated as America and the rest of the world face new and ongoing challenges concerning their rights of their citizens. Carl E. Moyler counts it as his mission to help people develop a strong consciousness of issues of social justice and advocate for the rights of every person. His deep commitment to his mission is evident in his book On Freedom and Revolt: A Comparative Investigation (ReadersMagnet; 2019).

On Freedom and Revolt examines the life and works of the French-Algerian philosopher and author Albert Camus (1913-1960) and African-American Baptist minister and social activist Martin Luther King Jr. (1929-1968). Moyler compared their writings and found out both men are alike in many ways.

Both Camus and King had lived in turbulent times. Despite the difference in time and place, they came united along a common path toward justice and freedom and refused to remain silent in the face of injustice.

As I voraciously read their works, interiorized their struggles, and was captivated by their ideas, it dawned upon me that they have an uncanny connection despite being poles apart doctrinally and politically, the author said in a blog post.

The author wrote in his book On Freedom and Revolt: Camus and King were born, reared and lived as personal witnesses to the social and political ravages of their time and place. Neither man was willing to stand in the presence of the evils of oppression and do nothing. They entered the struggle as full participants, one an agnostic humanist and the other a seminary-trained Christian.

Camus was born to semi-proletarian French parents in colonial Algeria and grew up from humble beginnings. He was exposed to the inequalities between the Europeans, who were mainly French, and the native Algerians, who had no citizenship under French law. He was also aware of the oppression that workers experienced in East Germany, Poland, and Hungary, which were all occupied by the Soviets. At a later age, he went to France, where he joined the resistance movement during the Nazi occupation.

King experienced discrimination early in his youth and lived through racial inequality and prejudice. Through the methods of nonviolence and civil disobedience, he led campaigns against racial segregation and economic injustice and also spoke against racial discrimination in employment and housing, police brutality, and American involvement in the Vietnam War.

On Freedom and Revolt addresses major concerns about tyranny, injustice, racism, poverty, exploitation, and war. Moyler uncovers and reveals in his book that neither Camus and King were willing to stand in the face of these devastating issues and do nothing. He finds common ground for the two men in presenting these social issues in spite of their differences in terms of racial and cultural backgrounds.

I believe their combined message has implications and directions that will provide the foundation for plans of action that will assist with the development of the moral courage for positive changes among people living in a civilized society.

Carl E. Moylers On Freedom and Revolt: A Comparative Investigation is available on the authors website https://onfreedomandrevolt.com/

The author, Carl E. Moyler was born in Newport News, Virginiaone of eight children. He currently resides in Dayton, Ohio. He was a graduate of West Virginia State University in 1954 with a major in foreign languages and an alumnus of the year in 2007. He holds a Masters degree in French from Case Western Reserve University in Cleveland, Ohio. He holds a Ph.D. in Comparative Literature from the Union Institute/University in Cincinnati, Ohio. He was a high school teacher of foreign languages, and a professor and an administrator at Urbana University and Wilberforce University. He was also a small business founder and president/CEO. These two prominent individuals were born, reared, and lived as personal witnesses to unfair issues in society.