She gets to the heart and soul of all her guests in REAL LIFE MATTERS program reaching millions of viewers worldwide, in Canada, United States, United Kingdom, 22 Caribbean country islands, and Africa. Darlita has earned the respect and admiration of people from all backgrounds, races, genders, religions and political ideas. Her onscreen honesty captivates audiences.

Known as the Oprah Winfrey of the North, Darlita Bostic is Chief Executive Officer of  DBoss Network. This Canadian-born, daughter of Barbados parents, is an innovative university-trained Sales and Marketing professional with a diverse track record building business relationships to provide an array of products, services and support to growing enterprises. She has successfully delivered results using IT tools and solutions, Web-based and E-commerce strategies and materials, cable and mainstream television programming, and Education services.

Always smiling, projecting happiness to her audience and loyal followers, Darlita communicates openly, persuasively, works well with teams as well as independently. Trains, mentors others to higher performance. And on TV screen oversaturated by 1000s of channels and fancy hosts, Darlita uses these skills to make sure interviewees open their hearts and souls for audiences to be surprised and amazed about their experiences.

REAL LIFE MATTERS is a powered packed inspired TV Night Prime Time program that deals with real matters that reflect real life. Also, would you like to be a Sponsor and/or run commercial ads in our show contact us.

Daily home-based meditation can increase the amount of grey matter in brains of patients with mild Alzheimer’s disease: Study

A recent study by Indian researchers has shown that a six-month daily home-based meditation can increase the amount of grey matter in brains of patients with mild cognitive impairment (MCI) or those with mild Alzheimer’s disease.  Meditation, therefore, appears to have a protective effect on the brain in these patients.

Persons with MCI are forgetful but can lead independent lives.  However, they have a higher risk of developing Alzheimer’s disease.  Alzheimer’s disease is progressive and irreversible and a major global health problem with huge socioeconomic implications. Yet, except for one prohibitively costly drug that is still being evaluated for clinical benefit, no medicine can alter the disease progression nor prevent or delay its conversion from the stage of MCI.

A research supported under the SATYAM program by Department of Science & Technology, Govt. of India was led by Dr. Amitabha Ghosh Director and Head Department of Neurology, Apollo Multispecialty Hospital Kolkata (erstwhile Apollo Gleneagles Hospital) together with Dr. S Bapi Raju {Cognitive Science lab at IIIT Hyderabad}, in collaboration with other researchers shows that a simple, cheap, easy to follow, meditation routine, when practiced daily for several months, can reverse grey matter loss in MCI and even in mild Alzheimer’s disease. This work has been published in the journal ‘Frontiers in Human Neuroscience’.

For this work, the researchers allocated patients with MCI or mild Alzheimer’s disease to meditation or control groups.  The meditation group practiced 30 minutes of silent, sitting meditation daily for 6 months. They did MRI scans at baseline and after 6 months, and all patients also underwent neuropsychological assessment.  The meditation group showed significantly increased grey matter over the frontal brain regions that are responsible for control of attention and goal-directed decision-making and reduced grey matter posteriorly. The left hippocampus (memory) and the right thalamus also showed an increase in grey matter volume. The team found a trend towards improved attention among the meditators.

According to the researchers, meditation research in MCI and Alzheimer’s disease is still very young. Previous researchers combined meditation with physical postures, movements, mantras, kriyas, or other mindfulness practices. Home meditation practice typically lasted 8-12 weeks.  Studies where it did extend for longer, did not include brain changes.  This is one of the first on brain changes in MCI and Alzheimer’s disease that explores the effects of silent, sitting meditation alone, practiced daily over a long term. The techniques are similar to those commonly practiced by regular meditation practitioners yet simplified enough to train a patient with early memory loss.

“Much of our waking state is spent on mind wandering. Excessive mind wandering, especially when loaded with persistent negative thoughts, damage the brain, predisposing one to early aging or even Alzheimer’s disease.  Meditation teaches non-judgmental and non-reactive awareness of appearing thoughts and improves one’s ability to disengage and focus on intended goals.  By doing so, meditation activates a set of brain networks which co-ordinate to increase attention and goal-directed behaviour, and reduce mind wandering and emotional reactivity,” Dr. Amitabha Ghosh explains.

This research suggests that spending a little time everyday on meditation practice could be protective in patients with memory loss.  It is possible that the earlier one starts practicing meditation, the better will be the results. The team plans to follow up on this work with much larger participant numbers and longer durations of study. For more details, Amitabha Ghosh (amitabhaghosh269@gmail.com) can be contacted.

Six States, Maharashtra, Punjab, Chhattisgarh, Karnataka, Gujarat and Madhya Pradesh continue to report a surge in the COVID daily new cases. 79.57% of the new cases are reported from these 6 states.

Maharashtra has reported the highest daily new cases at 36,902. It is followed by Punjab with 3,122 while Chhattisgarh reported 2,665 new cases. Ten states, as outlined under, are displaying an upward trajectory in daily new cases. 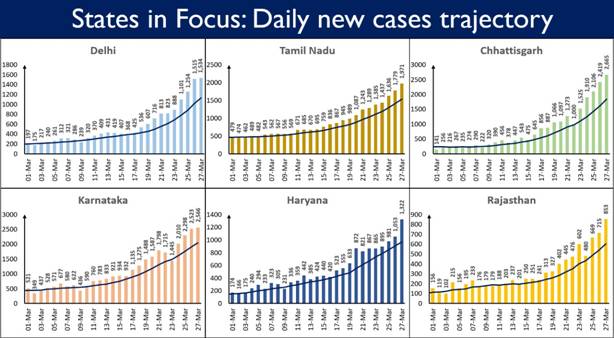 Maharashtra, Kerala and Punjab cumulatively account for 73% of the total active cases in the country. 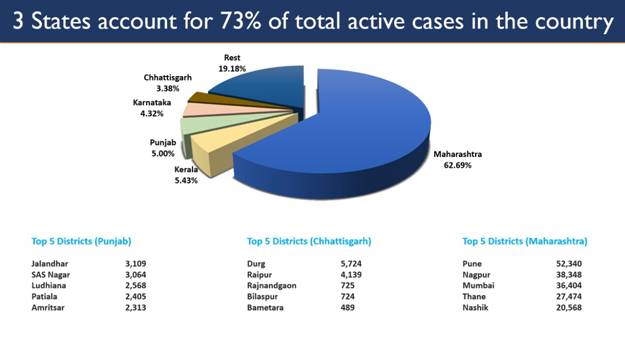 On the other hand, the total vaccination coverage in India has crossed5.8-crore.

India stands second in the world in terms of the number of vaccine doses administered (as on 25th March, 2021). 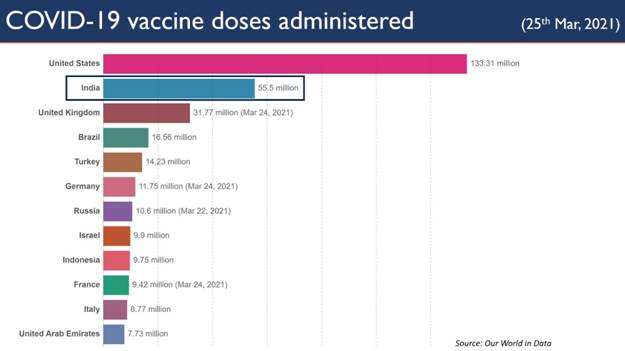 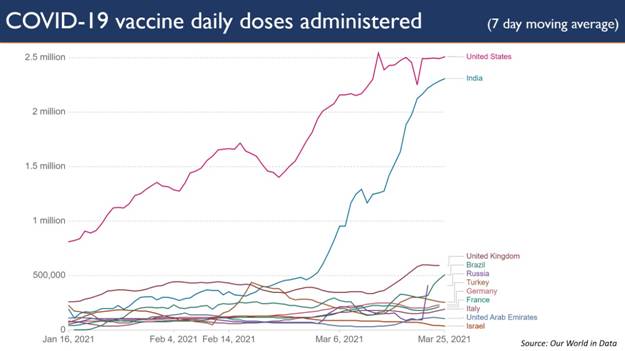 Eight States account for 60% of the cumulative vaccine doses given so far in India. Maharashtra, Rajasthan, Uttar Pradesh and Gujarat have crossed the benchmark of 5 million vaccinations. 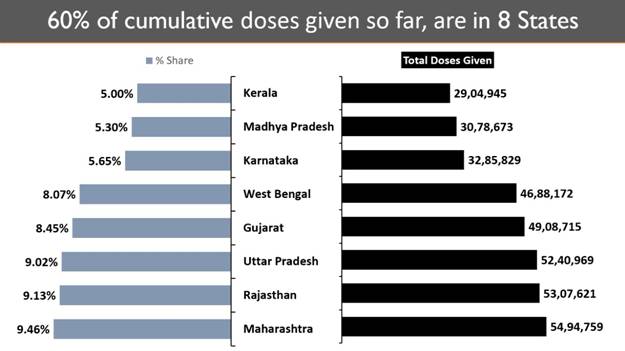 The average daily doses being administered show a steady increase. 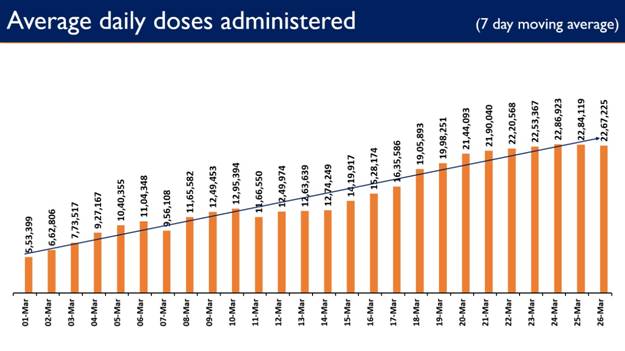 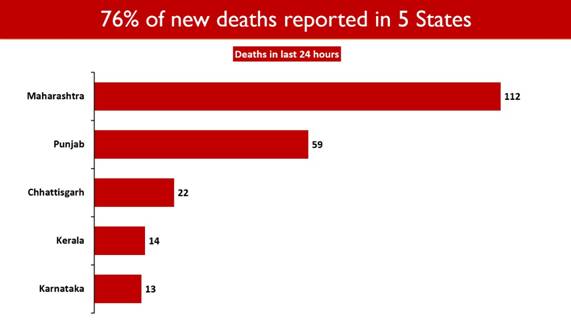