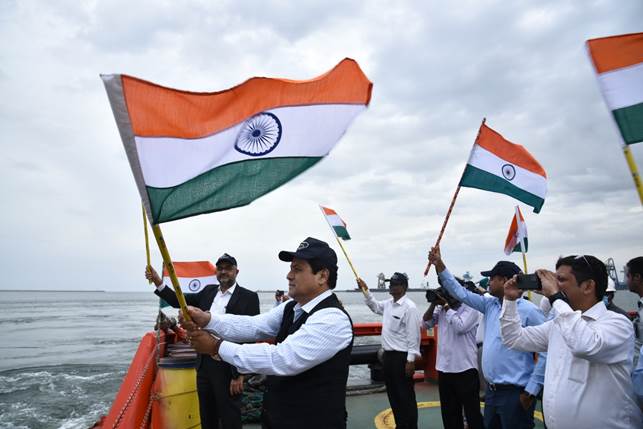 Shri Sonowal also laid the foundation stones for two Sewage Treatment Plants at the port in order to champion the cause of sustainable growth. The combined capacity of these two plants is pegged at 130 Kilo Litres per Day (KLD), with one at 90 KLD & other at 40 KLD capacity. The water generated through these plants will be used within the Port reducing its dependence on usage of fresh water. The minister also launched a Computer upgradation programme at the Port in order to augment IT infrastructure at the port. A total of 440 units of modern computer set ups are to be set up as per this programme. 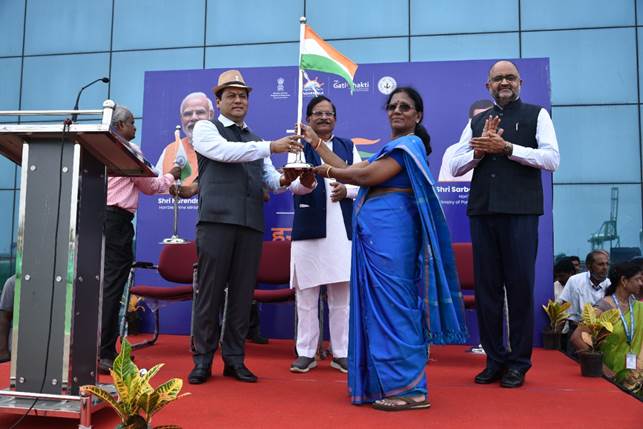 Highlighting the role of PM Gati Shakti as an Advantage factor, Shri Sonowal, said “As we are celebrating Azadi Ka Amrit Mahotsav, we must remember the vision of our honourable Prime Minister Shri Narendra Modiji has set for the country to become Atmanirbhar by 2047, when the country will be celebrating a century of freedom. During this 25 years, which the honourable Prime Minister has termed Amrit Kaal, we must work hard and with a laser sharp focus to bring home this objective & make our country the best in the world. Such a unique model envisioned by Modiji is PM Gati Shakti model. We can unlock huge potential by applying our resources & secure Advantage Gati Shakti. I am happy to share with you all that Chennai Port is working to secure this advantage absolutely. Many projects like Bunker Berth at Bharathi Dock, development of the Goods Shed facility at Jolarpet, a new Elevated Road from Chennai Port to Maduravoyal, development of Multimodal Logistics Park at Mappedu, Chennai and many more are on the path to avail this advantage and unlock great trade potential for the country.”

As the country celebrates Azadi Ka Amrit Mahotsav (AKAM), it was decided that the port will install a 20 meters high National Flag Mast. This foundation will hold a National Flag with a height of 18 feet & width of 12 feet. The structure will be able to withstand a wind velocity upto 140 Kms per hour. At such a stature, the National Flag will instill patriotic feelings & remind of the contributions made by our forefathers to win the freedom of the country. As many as 300 employees of Chennai Port formed a human National Flag at West Quay IV Berth of the Port in order to evoke the spirit of ‘Har Ghar Tiranga’ among common people of the region. The people – led by  Shri Sarbananda Sonowal – also enthusiastically took part in a cleanliness drive at the Besant Nagar Beach as part of Swacha Sagar Surakshit Sagar campaign. Along with the officials, the students of Indian Maritime University actively took part in this exercise. The Minister also received a Guard of Honour by Central Industrial Security Force (CISF) at West Quay IV Berth in the port. 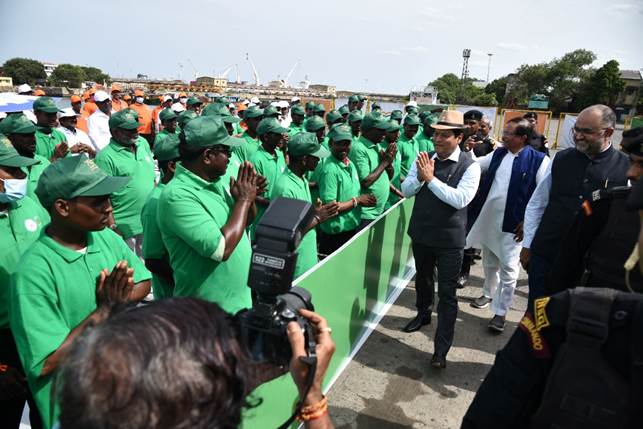 Shri Sonowal also handed over compensation to 16 family members of Chennai Port Authority who lost their lives to COVID 19 pandemic.

The Chennai Port has been playing a crucial role in the industrialisation of the southern India. Following the acquisition of the Kamarajar Port, the Chennai port has been doing good business. In FY2021-22, the port handled 48.6 MMT of cargo and registered an increase of 11.5% compared with the cargo handled during the last year in spite of Covid-19 backdrop. The Chennai port earned a record net surplus of Rs 113.15 crores in FY 2020-21, their highest in a decade.


PM to visit Hyderabad and Chennai on 26 May

In a step towards boosting infrastructure development,  enhancing connectivity and giving an impetus to ease of living in the region, Prime Minister will dedicate to the nation and lay the foundation stone of 11 projects worth over Rs 31,500 crore in Chennai. These projects will also help significantly improve socio-economic prosperity in the region, have a transformative impact on several sectors and also help create employment opportunities.

The 115 km long Ennore-Chengalpattu section and 271 km long Thiruvallur-Bengaluru section of ETBPNMT natural gas pipeline, built at a project cost of around Rs. 850 crore and Rs 910 crore respectively, will facilitate supply of natural gas to consumers as well industries in Tamil Nadu, Karnataka and Andhra Pradesh.

The programme will also witness inauguration of 1152 houses constructed as part of  Light House Project – Chennai,  built at a cost of Rs 116 crore under Pradhan Mantri Awas Yojana-Urban.

Prime Minister will also lay the foundation stone of six projects, being built at a cost of over Rs. 28,540 crore.

The foundation stones for redevelopment of five Railway stations: Chennai Egmore, Rameswaram, Madurai, Katpadi and Kanniyakumari, will also be laid during the programme. This project will be completed at a cost of over Rs. 1800 crore, and is being undertaken with a view to enhance convenience and comfort of the passengers through provision of modern amenities.

Prime Minister will also lay the foundation stone of a Multi Modal Logistic Park at Chennai worth around Rs. 1430 crore. It will provide seamless intermodal freight movement and also offer multiple functionalities.

Prime Minister will participate in the celebration of completion of 20 years of Indian School of Business (ISB) Hyderabad and address the graduation ceremony of Post Graduate Programme (PGP) Class of 2022. ISB was inaugurated on 2 December 2001, by Former Prime Minister Shri Atal Bihari Vajpayee. Regarded as one of the top B-schools in the country, ISB also collaborates with several Ministries and Departments of the Government to provide training and capacity building.