The reviews are in! Billy Dering soars with “Utopia Project

This is the first book in a trilogy from the Ocean County author. 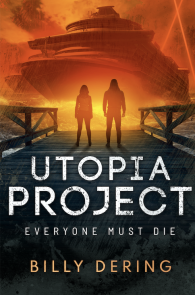 Utopia Project- Everyone Must Die

The sought-after book debuted on May 1 and has been given star-studded reviews and praise ever since. Frostbite Publishing says, “I really enjoyed reading this story. It was one I could not put down. The tension and desire to know how it ends kept me on the edge of my seat throughout the whole thing.”

Defined as dystopian/post-apocalyptic fiction, “Utopia Project- Everyone Must Die” takes you on a journey where several powerful countries conspire to develop the ultimate solution for population control. The secret government project’s endgame is to create a utopian society. The plan goes awry when somehow a select few individuals survive global genocide.

With 65 reviews and a 4.9 out of 5 rating on Amazon, one reviewer says, “Billy Dering must have been tending bar the night Plato, Aldous Huxley and Jack Finney wandered in, threw down a few cold ones, and started telling stories. Utopia Project is a haunting love story woven around timeless philosophical themes and placed within a chillingly contemporary setting. Adequate character development is often missing from fast-paced, action novels but the author has managed to give us both form and substance.”

Dering spent the first 18 years of his life growing up on the New Jersey shore. After high school, his life took him on a path through South Carolina, Louisiana and finally back home to Ocean County, NJ where he currently resides.

Dering wrote the very first scene of Utopia Project when he was in middle school. “Intrigued by the dystopian/post-apocalyptic genre, I was inspired to write a story in that genre that was filled with action, adventure and drama,” Dering said. “I continued to write additional scenes throughout my college years at Clemson University in South Carolina where I was often called ‘Billy the Kid’ by my peers.”

Dering later transferred the name over to the lead character in the Utopia Project – Kid Carlson. “It was just so fitting,” Dering added. “In many ways, Kid is me.”

Dering eventually took a break from college and went back home to New Jersey. The endeavor is what made Dering decide to focus the majority of Utopia Project in the Garden State. In fact, the geographic area that showcases the Atlantic Ocean, Barnegat bay and the forests of the Pinelands National Reserve, serve as the book’s primary backdrop.

OnlineBookClub.org gives Utopia Project a 4/4-star rating, and says, “Billy Dering is excellent in interweaving intrigue and imagination. Another main strength the novel has is its imagery and intrigue – both are consistent and ever-present.”

An observer of life, people and society, Dering used the book as an outlet to create a utopia while reflecting on what makes us human. “From moment one, Utopia Project was about creating a utopia, initially on some ships, but then becoming the new world,” he said. “Although it took me many years to write and work through the many facets of this trilogy, I always knew how the story would end.”

An IndieReader review says, “The premise of ‘Utopia Project- Everyone Must Die’ is an interesting one, the characters are engaging, the action moves forward fairly briskly.

One GoodReads.com reviewer notes that, “http://www.prlog.org/”Utopia Project- Everyone Must Die’ is the start of a three-book series you do not want to miss. It is a great read. The author is a master storyteller who’s well-anchored imagination weaves a credible yet unthinkable tale that brings together love, hope, loyalty and courage all in the face of overwhelming odds for human survival.”

The overarching purpose of the book is to compel the reader to pause and look at the world we live in and where it is going, according to Dering. “Like any great story, I want Utopia Project to be so immersive that it draws you into its world but makes you reflect on your own,” he said.

And, based on the reviews thus far, Dering is well on his way to achieving his goal.

To purchase your copy of Utopia Project- Everyone Must Die, click here. (https://www.amazon.com/dp/B093T6S653)

Billy Dering spent the first 18 years of his life growing up on the Jersey Shore. After high school, his life took him on a path through South Carolina, Louisiana and finally back home to Ocean County, NJ. A business administrator by profession, Dering has written many published pieces, and is now applying his love of writing in crafting his own post-apocalyptic novels. He has always been an avid reader of all genres, especially post-apocalyptic, dystopian and techno-thrillers. Dering also enjoys outdoor recreation, songwriting, guitar playing, sports and the soul-soothing ambiance of the sea (especially when the beach and boardwalk are deserted!). Dering lives in Toms River with his wife,  two children and one nephew.