Prime Minister Shri Narendra Modi interacted with Jan Aushadhi Kendra owners and beneficiaries of the scheme today via video conferencing. Jan Aushadhi week is being celebrated across the country from 1st March to generate awareness about the usage of generic medicines and the benefits of Jan Aushadhi Pariyojana. The theme of this event is “Jan Aushadhi-Jan Upyogi”. Union Minister Dr Mansukh Mandaviya was among those present on the occasion.

Interacting with the beneficiary from Patna, Ms Hilda Anthony, the Prime Minister asked how she came to know about the Jan Aushadhi medicines. He also enquired about the quality of the medicines. She replied that she has benefited greatly from the medicines as she is able to get her monthly medicines for 250 rupees instead of 1200- 1500 rupees earlier. She said that she spends the savings on social causes. The Prime Minister appreciated her spirit and hoped that people’s faith will increase in Jan Aushadhi through people like her. He said the middle class can be a great ambassador for this scheme. He also talked about the impact of disease on the financial situation of middle and lower-middle and poor sections of society. He called upon the literate segment of society to talk about the benefits of Jan Aushadhi.

Interacting with the divang beneficiary Shri Suresh Chandra Behera from Bhubaneswar, the Prime Minister enquired about his experience with Jan Aushadhi Pariyojana. The Prime Minister also asked whether all medicines needed by him are available at the Jan Aushadhi store. Shri Behera said that he gets all the medicines from the store and saves 2000-2500 rupees every month as his parents also need medicines. The Prime Minister prayed to Lord Jagannath for his family’s recovery and wellbeing. He praised the spirit of Shri Behera who was a divyang and bravely fighting his battle.

Interacting with Ms Babita Rao from Mysore, the Prime Minister urged her to spread the word through social media so that more people can benefit from the scheme.

Ms Urvashi Nirav Patel from Surat described to the Prime Minister, her journey of promoting Jan Aushadhi in her Area and how the low-cost sanitary pads from the Jan Aushadi Kendra helped her to donate it to more people through her efforts. The Prime Minister appreciated her service spirit as a political activist. This will enhance the role of service in public life. He also suggested that beneficiaries of PM Awas Yojana and beneficiaries of free ration during the pandemic should be approached for increasing their awareness regarding hygiene.

Shri Shailesh Khandelwal from Raipur spoke about his journey with Jan Aushadi Pariyojana. He said that he felt good that the medicines were low cost and he spread the word to all his patients. The Prime Minister asked other doctors also to promote Jan Aushadhi among the people.

Addressing the gathering, the Prime Minister said Jan Aushadhi Kendras are centres for medicine for the body, they also reduce the anxiety of the mind and they are also centres of relief to the people by saving their money. The Prime Minister expressed satisfaction that such benefits are accruing to all segments of people and in all parts of the country. He also noted the success of the 1 rupee sanitary napkin. The sale of 21 crore sanitary napkins shows that Jan Aushadhi Kendras have made the lives of women easy all over the country.

The Prime Minister said as of now more than 8,500 Jan Aushadhi Kendras have been opened in the country. These centres are now becoming solution centres for the common man and not just another government store. He said that the government has also controlled the price of more than 800 medicines required for the treatment of diseases like cancer, tuberculosis, diabetes, heart disease. The government has also ensured that the cost of stunting and knee implants is also kept under control. He gave statistics regarding making medical care affordable for the citizens. He informed that more than 50 crore people are in the ambit of Ayushman Bharat Yojana. More than 3 crore people have taken benefit of the scheme, saving 70 thousand crore rupees of the poor and middle-class people. PM National Dialysis programme has saved 550 crore rupees. Knee implant and medicine price control saved 13 thousand crore rupees.

The Prime Minister informed that a few days back, the government has taken another big decision, which will benefit the poor and middle-class children. “We have decided that half the seats in private medical colleges will be charged at par with government medical colleges”, he informed.

In line with the Prime Minister’s vision to make medicines affordable and accessible to the citizens, there are now more than 8600 Jan Aushadhi stores across the country, covering almost every district.

In line with Prime Minister Narendra Modi’s commitment to the poor and to ameliorate the hardships faced by the poor and needy due to Covid-19 situation, the PMGKAY scheme is announced by the Government of Indiaby the Union Government for the month of May and June 2021.The Secretary Department of Food & Public Distribution Shri Shudhanshu Pandey today briefed the media personsabout the announced Pradhan Mantri Garib Kalyan Anna Yojana.

Under this scheme it has been decided to allocate free-of-cost food grains @ 5 Kg per person per month to nearly 80 Crore beneficiaries covered under National Food Security Act, 2013 (NFSA). This allocation would be over and above NFSA foodgrains for next two months i.e. May and June 2021 on the same pattern as the earlier “Pradhan Mantri Garib Kalyan Anna Yojana (PM-GKAY)”.

In his opening remarks, Shri Pandey informed that the Food Corporation of India will be providing additional 80 LMT foodgrains in the month of May and June 2021, under the special scheme to respective State/ UT Governments, in addition to their regular NFSA allocation.

Shri Pandey further added that approximately 179 LMT foodgrains, for NFSA & this scheme will have to be supplied in May and June 2021 for which FCI is fully geared and has adequate availability of stocks of food grain in States/UTs.

Under this special scheme, around 80 Crore NFSA beneficiaries covered under both categories of NFSA, namely Antyodaya Anna Yojana (AAY) and Priority Householders (PHH), will be provided with an additional quota of free-of-cost foodgrains (Rice/Wheat) at a scale of 5 Kg per person per month, over and above their regular monthly entitlements under NFSA.

The Secretary informed that during 2020-21, Government of India had announced PMGKAY-I (April-June 2020) and PMGKAY-II (July-November 2020) under which 104 LMT wheat and 201 LMT rice, total 305 LMT foodgrains were successfully supplied by FCI to the respective State/ UT governments he added.

The convergence of ESI Scheme with Ayushman Bharat PM-JAY in 113 districts of 04 states Chhatisgarh, Karnataka, Madhya Pradesh & Maharashtrawas launched by Shri Santosh Kumar Gangwar, Hon’ble MoS (IC) Labour & Employment and Chairman, ESIC on 10.03.2021 on the culmination day of ESIC Special Services Fortnight at New Delhi. The convergence will ensure that 1.35 crore ESI beneficiaries in such districts avail cashless medical services through empaneled hospitals of Ayushman Bharat PM-JAY without any need of referral. To avail the medical care, the Insured Worker or the beneficiary need to carry ESIC e-pehchan card or Health Passbook and Aadhar Card with them. The list of districts and empaneled hospitals are available at www.esic.nic.in/ab-pm-jay . 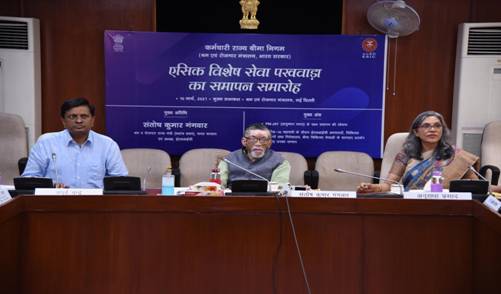 Union Labour Minister lauded the efforts of ESIC Hospitals/Medical Colleges and ESIS Hospitals in providing medical care during the period of Covid-19 pandemic, not only to the workers but also to the general public. During the event, he also felicitated such ESIC 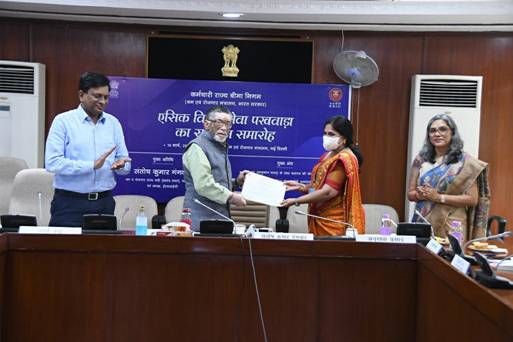