“What I Want My Children to Know Before I Die”

But there is one thing that happened to Anderson decades ago that compels him to share why he thinks parents have more influence than they think.

As an eight-year old boy, EksAyn watched his mom die.

On May 5, 1986, EksAyn Anderson looked into his mother’s eyes and embraced her before she left for the hospital and didn’t return. He hasn’t given his mother a hug since that day. But there is something that he says is almost as good:

“It is feeling her influence,” he says.

Even though his mother died decades ago, he can recount little things she did that affect him today and that are now affecting his children. Anderson believes that this influence will continue for generations.

“The influence of a parent is going to far outlast the influence of any other career. Most businesses people work in all day long will be bought, sold, bankrupted, or disrupted within a decade or two. Your great-great grandkids are not going to care what you did for work, just like you don’t likely care what your great-great grandparents did for a living. But the kind of parent you are now will quietly filter down through generations and will affect your children’s children’s children – it will profoundly affect them,” Anderson said.

EksAyn hopes his new book will help parents realize even though most of what they do is unseen by the world, being a parent really is the ultimate career.

“What I Want My Children to Know Before I Die” is currently available on Amazon. 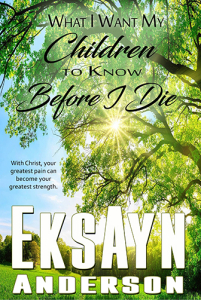