Shri AshwiniVaishnaw, Union Minister for Electronics & IT, Communications and Railways, and Shri Rajeev Chandrasekhar, Union Minister of State for Electronics & IT, Skill Development and Entrepreneurship, todayfelicitated the winners of the Cyber Security Grand Challenge – a first-of-its-kind Cyber Security challenge to promote innovation and entrepreneurship in the country. The winners of Grand Challenge were awarded with a trophy each and cash prize money of Rupees One Crore to the winner, rupees 60 lakhs to the first runner-up and rupees 40 lakhs to the second runner-up. 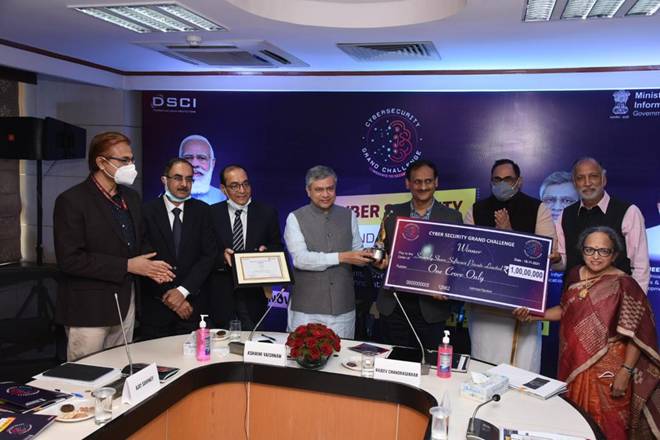 The winners along with the problem statements addressed by them are:

The Cyber Security Grand Challenge was launched jointly by Ministry of Electronics & IT (MeitY) and Data Security Council of India(DSCI) on 15thJanuary 2020 with a total prize money of INR 3.2 crore and a goal to promote a culture of innovation and entrepreneurship spirit by building key cybersecurity capabilities in the country and contribute to strengthen the cyber security posture of the nation. Under the aegis of this initiative, Cyber Security start-ups from India are being incentivized to innovate and build solutions that can be adopted in India and taken to global markets as well.The challenge focused on strengthening the cyber security capabilities of the country and development of solutions to benefit the people and society.Innovations in cyber security through such initiatives will help to mitigate cyber threats and secure the cyberspace which will in turn safeguard business landscape and citizens of India. A unique feature of this challenge is that the IPR of the product being developed as part of the challenge will be owned by the respective start-up.

The Challenge was opened with six (6) Problem Statements and was conducted in 3 stages namely Idea, Minimum Viable Product(MVP) and Final Stage. The submissions by the teams were evaluated by the jury panel consisting of Government, Academia, and Industry at each stage to shortlist the entries that could move to the next stage. In Idea (1st) Stage, based on the ‘concept’ and ‘approach’ proposed to build a product for one of the problem statement(s), the jury shortlisted the top 12 teams which moved to the MVP(2nd) Stage. Each of them was given a sum of Rs.5 lakh and mentorship support. In the MVP (2nd) stage, based on their ‘approach’, ‘USPs and value proposition’, ‘deployability’ and ‘product market fit’, jury shortlisted the top six (6) teams, each of whom was given a further sum of Rs.10 lakh. The jury evaluated the final products and selected the winner and runners-up in the final stage. In his keynote address on the occasion, Shri AshwiniVaishnaw, Union Minister for Electronics & IT, Communications and Railways, said, “We are living in a connected world today and there is a clear convergence of computing, communication, and sensors. These three technologies have not only reduced cost but increased capabilities and complexities. Most systems today, whether industrial, manufacturing or banking, are controlled digitally where vulnerabilities have grown multifold. Entry points are no longer well defined and to secure our infrastructure, we have to be at least one step ahead of those who want to compromise the systems.

The Prime Minister’s vision is very clear on Cyber Security. We have to become thought leaders and market leaders in Cyber Security. I urge start-ups, industry, academia to look at this from a larger perspective. The Government stands by new ideas, new structures and is open to support them.” 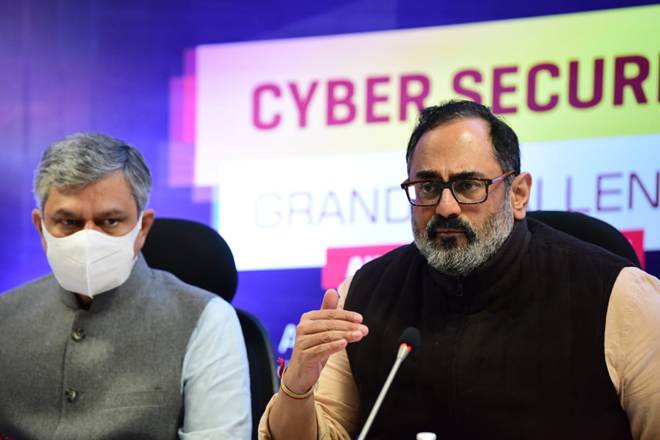 Shri Rajeev Chandrasekhar,  Union Minister of State for Electronics & IT, Skill Development and Entrepreneurship, said, “The Prime Minister’s vision for Digital India has three broad outcomes: (i) Technology and Internet empowers and changes the lives of Indian Citizens; (ii) Technology expands opportunities in our economy; (iii) Technology creates strategic capabilities within our country. And Cyber Security falls at the intersection of the 2nd and 3rd point, as it drives the expansion of the digital economy and creates opportunities and investments; and is also at the heart of addressing serious strategic capabilities that the country requires to safeguard the Internet by assuring safety and trust.

The capabilities in cyber security will arise from collaboration between the government, industry, and start-ups. The Ministry is committed to make start-ups successful and will clearly stand by you and help you grow, get market access both within and outside the Government. Our goal is to make India highly capable in the space of Cyber Security.”

Shri AjaySawhney, Secretary, MeitY, said, “As we aim for a trillion-dollar Digital Economy, Cyber Security remains a key area. India’s ranking in ITU’s Global Cybersecurity Index has jumped 37 places from rank 47 in 2018 to the 10th position in 2020. As we move forward, it is extremely important to have large number of indigenous cyber security products built for India and the globe. The government will help in scaling of the products by promoting their use within government buyers through GEM. We are working towards the next Grand Challenge which will be much larger and bigger in scope.”

Dr. Rajendra Kumar, Additional Secretary, MeitY, said, “The Grand Challenge is timely, given the growing importance of cyber security in the post pandemic world where there are new challenges due to greater digital adoption. This challenge spurred the interest of the entire security start-ups ecosystem in India.”

Dr. Gulshan Rai, Jury Chair and former National Cybersecurity Coordinator, said, “The cyber security Grand Challenge has allowed cybersecurity start-ups in India to break away from conventional technological development models, they’ve been doing for long,and come up with futuristic working models.The jury looked at solutions which address emerging security problems due to the convergence of technologies in products and services.”

Shri Rajendra S Pawar, Chairman, DSCI, said, “On the Prime Minister’s exhortation, NASSCOM-DSCI created a Cyber Security Task Force and studied the cyber security landscape. One of the key findings was that cyber security clusters thrive when there is a tight collaboration between the industry, academia, and government. This is a great initiative to spur innovation and collaboration, and I heartily compliment the government on extending unconditional support as it gives a clear message to start-ups that such initiatives are important for the government.”