The governments of Canada and Quebec are announcing a joint investment of $3.2 million to speed up the deployment of high-speed Internet to 2,980 households in the Coaticook RCM by September 2022.

The announcement was made yesterday by the Honourable Marie-Claude Bibeau, Minister of Agriculture and Agri-Food and Member of Parliament for Compton–Stanstead, and Geneviève Hébert, Deputy Government Whip and Member of the National Assembly for Saint-François. This joint investment comes under Phase II of Canada–Quebec Operation High Speed, which was announced on the morning of July 21 and includes $94 million in combined government funding, contributed equally, for 13 new community-led projects. Phase II projects complement those announced last March as part of Operation High Speed’s first phase.

Co-operating with telecommunications companies and organizations, adding a deadline with penalties to new contracts and providing coverage for all homes in the region where projects are being undertaken will ensure quick and effective deployment.

“The Coaticook RCM team has shown great leadership in being among the first to obtain funding to connect our region. There were many technical challenges, but I’m very happy to announce that the TACTIC project will be included in the Ottawa–Quebec service provider agreement, which will increase funding and ensure that all residents can be connected to high-speed Internet by September 2022.”

– The Honourable Marie-Claude Bibeau, Minister of Agriculture and Agri-Food and Member of Parliament for Compton–Stanstead

“I’m delighted that all Saint-François households will have access to high-speed Internet services by September 2022. We are speeding up the deployment of infrastructure for the remaining 2,980 households. Quebec’s contribution to this important $22.6-million project is $8.6 million: $7 million from the Québec branché program and a new contribution of $1.6 million under Phase II of Operation High Speed.”

– Geneviève Hébert, Deputy Government Whip and Member of the National Assembly for Saint-François

“We’ve been waiting a long time for this news, and in the coming weeks, we’ll finally be able to announce the service provider chosen and the deployment schedule for the high-speed Internet the region’s been so eagerly awaiting. After months of work, it’s a huge step for our organization, and we’ll now be able to turn our attention to other parts of the project to ensure that our first residents are connected by the end of 2021.”

Canada–Quebec Operation High Speed will give Quebec the highest connectivity rate in Canada, at more than 99%.

The Government of Canada has allocated billions of dollars to Internet infrastructure in rural and remote regions, including $2.75 billion as part of the Universal Broadband Fund, of which $1 billion comes from Budget 2021.

To date, the Government of Quebec has invested more than $1 billion to accelerate high-speed Internet connectivity for all Quebecers by fall 2022.

The 18,200 households that will be connected under Phase II are in addition to the 150,000 households covered in the March 2021 announcement and the approximately 66,000 households already covered under other government programs.

To reach the goal of optimal connectivity in all the regions by 2022, approximately 18,200 households, for which no projects are planned, will still need to be connected. These households are in areas that are particularly difficult to reach and sparsely populated. Technological solutions are currently being considered, and the strategy chosen to reach these households by 2022 will be announced at a later date.

Rs 40,700 crores allocated under Swachh Bharat Mission (Grameen) towards SLWM support for over 2 Lakh Villages in 2021-22

The Ministry of Jal Shakti under Swachh Bharat Mission Grameen (SBM-G) Phase 2 is poised to support over two lakh villages achieve solid and liquid waste management (SLWM) arrangements through an investment of over Rs. 40,700 crores in the present FY 2021-22. The National Scheme Sanctioning Committee (NSSC) of SBM-G under the Chairmanship of Secretary, Ministry of Jal Shakti approved the Annual Implementation Plan (AIP) of States and UTs.

While the Central share would be around Rs.14,000 crores, the States shall spend over Rs.8300 crores. Funds to the tune of Rs. 12,730 crores will be made available through the Fifteenth Finance Commission and over Rs.4,100 through convergence with MGNREGS.  Further, over Rs.1500 crore will be invested by the States through other sources e.g. Business Model, CSR, other schemes, etc.  SBM(G) Phase 2 aims at achieving comprehensive cleanliness in villages also called ODF Plus status by focusing on ODF sustainability and ensuring SLWM arrangements in villages.

Implementation of Swachh Bharat Mission Grameen Phase 2 in 2021-2022 will see construction of over 50 lakh Individual Household toilets (IHHLs), one Lakh Community toilets, Plastic Waste Management Units in over 2400 Blocks of India, Gobardhan projects in 386 Districts, Faecal sludge management arrangements in over 250 Districts apart from the targeted support for over 2 lakh villages in implementation of SLWM interventions.

Approving the State Plans, Secretary, Ministry of Jal Shakti, highlighted the need to ensure that no one is left behind, and every household has access to a toilet. He emphasized on the adoption of twin pit toilet technology for IHHLs construction as it is relatively safer, low cost and easier to operate and maintain. He also stressed on the need for low cost technologies for solid and liquid waste management as it would help decentralized operation and maintenance.

Earlier Department of Drinking Water and Sanitation (DDWS) supported States and UTs to undertake a participatory planning exercise along with Districts and Rural Local Bodies to step up implementation of ODF plus elements and achieve results at scale. Each State/UT have developed their Annual Implementation plans that set out the implementation targets and strategy that would be adopted in the State/UT. Implementation of Swachh Bharat Mission is led by Rural Local Bodies and the mission has the reputation of being a unique janandolan on Swachhata in the country. 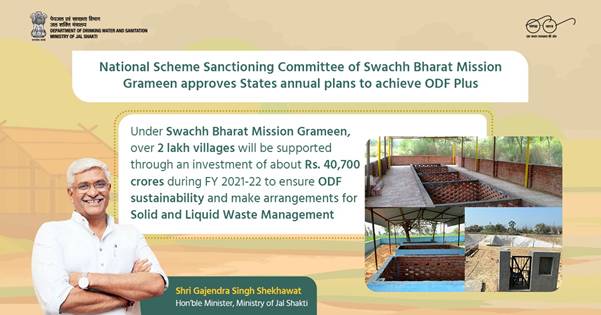 The National Scheme Sanction Committee comprises representatives of Ministry of Rural Development, Panchayati Raj, Ministry of Housing and Urban Affairs, representative from State Governments apart sector experts. The NSSC reviewed the plans of all States and UTs and provided them guidance to intensify implementation as sanitation and hygiene are of paramount importance in the pandemic times. NSSC emphasized on the effective utilization of Fifteenth Finance tied funds earmarked for sanitation.