Addressing the gathering on the occasion, Dr Paul stated that health must be given due attention. Lauding the stalls at the pavilion, he highlighted the need to create awareness among people for diseases like Amenia and Diabetes which remain invisible until diagnosed.

Dr Paul urged everyone to take the message of health in a mission-mode. He also appealed to all stakeholders to maximise their outreach of informative activities via various media. He encouraged all stakeholders to use the Health Pavilion as a micro-system for triggering a Jan Andolan towards better health. 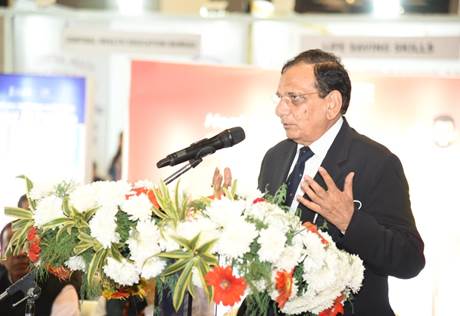 Shri Gopalakrishnan expressed his optimism on key reforms and initiatives being undertaken in the Health sector. He emphasized on the Digital Health initiative and highlighted its universal impact and applicability. He further stated that a lot of health issues can be resolved if people are informed well.

With over 25 years of experience in the water and sanitation sector, Mr Iyer spearheaded the implementation of the India’s flagship $20-billion Swachh Bharat Mission, which successfully delivered access to safe sanitation to 550 million people.

“Honoured and humbled to have been given the incredible opportunity to serve the country again—this time as CEO, NITI Aayog. I am deeply grateful to Hon’ble PM Narendra Modi for another chance to work under his leadership towards a transformed India,” Mr Iyer said.

A 1981-batch IAS officer of Uttar Pradesh cadre, Mr Iyer has worked with both the public and private sectors. He was Secretary to the Government of India in the Ministry of Drinking Water and Sanitation in New Delhi during 2016–20.

Using a tool made by NITI Aayog and TIFAC, eight scenarios have been developed for analyzing the future penetration of electric two-wheelers in the country.

In an optimistic scenario, the report forecasts 100% penetration of electric two-wheelers in the Indian market by FY 2026–27. In another scenario, which is technology driven and where current incentives are withdrawn by 2024, the report predicts 72% penetration by 2031.

During the launch of the report, NITI Aayog CEO Amitabh Kant said, “This report provides a much-needed tool to the industry, researchers, academicians, and policymakers to analyze and respond to various scenarios. It can be replicated easily in other segments too, such as four-wheelers, without any hassle.”

The eight scenarios considered are:

The future scenarios have been constructed on the basis of three major factors that influence the market penetration of electric two-wheelers: (i) demand incentives (ii) cost of battery (iii) vehicle performance in terms of both range and power.

The report provides important insights into the required infrastructure, manufacturing capability, policies, and technology-development priorities in the area.

The scenarios can be used by government agencies, the industry, and academic/R&D institutions for evidence-based analysis of policies, market scenarios and technology development strategies.

Through the workshop, participants sought to holistically understand all components of the bamboo value chain—plantation, production, processing, standardization and utilization—in order to develop strategies and a roadmap for the development of a circular economy in the sector. As many as 150 participants attended the workshop, both online and offline.

Speaking on the occasion, Dr Jitendra Singh highlighted the urgent need for raising public awareness about the untapped potential of bamboo and encouraged the establishment of entrepreneurial start-ups in the sector. He characterized bamboo as ‘green gold’, recognizing its crucial role in uplifting the Indian economy in the post-Covid scenario.

He added, ‘Bamboo can be used for making bio-ethanol, which would reduce dependence on imported fossil fuel, thereby achieving the goal of Aatmanirbhar Bharat in the petroleum sector.’

NITI Aayog Vice Chairman Dr Rajiv Kumar said, ‘Bamboo is a natural product that can benefit many industries. The need of the hour is to work on increasing the supply and meet the growing demand for bamboo and its products. There is a strong need to promote the bamboo sector across all states with the development of entrepreneurship amongst farmers and the youth.’

‘The construction sector in India presents tremendous growth opportunities for bamboo, owing to its unique features. Its  versatility as a substitute offers a chance to protect forests; it has immense economic and business potential,’ added NITI Aayog Member Dr VK Saraswat.

The workshop had four technical sessions. The first explored the production, value addition, and international experience of bamboo. The second emphasized on government policies, programmes, and opportunities in different sectors. The third deliberated upon a circular economy in the sector, focusing on the techno-commercial utilization of bamboo-based industries. The last session discussed national and international best practices.

The workshop was attended by participants from Central ministries, state governments, KVKs, industry, academic and research institutions, and NGOs.  Key players from the private sector, including bamboo enthusiasts, shared their experience and innovative ideas to enhance the development of bamboo in the country.

NITI Aayog CEO Amitabh Kant said, ‘From the point of view of job creation and ecological and economic development in India, bamboo has enormous potential for enhancing the quality of life, for both urban and rural communities.’

NITI Aayog Senior Adviser Dr Neelam Patel concluded the session by highlighting the challenges in the production, productivity and development of the overall bamboo value-chain. She mentioned the need for setting up BIS standards of bamboo and FSSAI certification of bamboo products. She requested industries to develop a framework for bamboo cultivation. She also emphasized on the need to link Kisan Rail to bamboo, GI tagging of bamboo products and the development of a nationwide knowledge information system on bamboo.

As a part of Azadi Ka Amrit Mahotsav to celebrate and commemorate 75 years of progressive India, NITI Aayog is organizing a series of events from November 2021 to April 2022. In this connection, a national workshop on Natural Farming wasorganized by Agriculture vertical, NITI Aayog on 30th November 2021 from 10 AM to 1 PM involving Krishi Vigyan Kendras across India under the Chairmanship by Dr. Rajiv Kumar, Vice Chairman, NITI Aayog. Opening remarks of the event was given by Dr. Neelam Patel, Senior Adviser (Agriculture), NITI Aayog which was followed by address by Shri Ramesh Chand, Member (Agriculture). He mentioned about the journey of the Country from food deficient to food surplus and the need to focus on doubling of farmers’ income. He also emphasized on the scientific validation of natural farming practices.

An exclusive website on natural farming developed by NITI Aayog was launched by Dr. Rajiv Kumar, Vice Chairman, NITI Aayog.The website covers information regarding natural farming including coverage of the practice in India, various schemes and initiatives by Central and State Governments, success stories from farmers and relevant publications among others.  The website can be accessed at https://naturalfarming.niti.gov.in/. During the Chairman’s address Dr. Rajiv Kumar mentioned about the sustainability issues associated with chemical agriculture in view of the impending climate change and emphasized on the need to shift to natural farming for improving farmers’ income, human health, soil health and conservation of environment and the need to propagate this practice among wider farmer community. He also encouraged the scientific community to come forward for scientific validation and holistic cost benefit analysis of natural farming.

Shri AcharyaDevvrat, Governor of Gujaratin his presidential address elaborated about his personal experiences in practicing natural farming and his experiences in Himachal Pradesh as Governor of Himachal Pradesh.He stated that shift to natural farming from chemical farming resulted inconsiderablereduction in cost of cultivation, improvement in the soil healthand better yield. He also mentioned about the advantage of natural farming over organic farming considering the lesser input requirement and reducedlabour cost. AcharyDevvrat emphasized that natural farming was based on frontline technologies and scientific principles. This was also pointed out by Dr. Rajiv Kumar.

The second technical session of the workshop was chaired by Prof. J. P .Sharma, Vice Chancellor, SKUAST, Jammu & Srinagar and included experience sharing by farmers and KVKs from Uttar Pradesh, Rajasthan and Haryana and Maharashtra followed by open house discussion.

More than 1000 participants including State Government and KVK officials, researchers from ICAR and Agriculture Universities and farmers have attended the workshop virtually fromacross the country.