The Union Minister of Agriculture and Farmers Welfare, Shri Narendra Singh Tomar visited the Indian Council of Agricultural Research, ICAR’s National Research Center on Mithun and a pineapple farm on the first day of his visit to Nagaland. Shri Tomar said that the Government of India is continuously working on the theme of ‘Vocal for Local’ in the AatmaNirbhar Bharat campaign. “During the Covid-19 pandemic, Prime Minister Shri Narendra Modi took the initiative for this, special emphasis was given on it and it has been taken on Mission Mode for the economic development of the country,” he said. Shri Tomar said that the National Research Center on Mithun is a unique biological resource of Northeast India and it is everyone’s responsibility to preserve it.

“Earlier mithun was reared in free-range system, but now as agriculture is increasing, forest area is decreasing, so farmers should adopt alternate practices for mithun rearing under semi-intensive system developed by the ICAR-NRC,” he said.

Shri Tomar appreciated the success of the institute in developing technologies that have benefitted the Mithun farmers in their economic uplift, as well as the efforts of the Center to improve the standard of living of farmers by generating interest and increasing their incomes. He also called for further research on the use of Mithun (a breed of cow) for maximum benefit of the farmers. Shri Tomar urged the institute to conduct research to find out the nutritional and therapeutic properties of milk and develop a business model and said that the fertilizer potential of Mithun dung and urine should be explored as an alternative model for natural farming. Shri Tomar also visited the Mithun farm and exhibition stalls showcasing various technologies and products developed by the Centre. He discussed the technologies developed by the Centre, such as feed blocks, mineral block dispensers and region-specific mineral mixtures. Shri Tomar also planted a sapling on the occasion. Delivering the welcome address, NRC Director Dr. M.H. Khan highlighted the major achievements of the Institute during the last 33 years.

Shri Tomar also visited the Nagaland Center of ICAR, which was established in the year 1975. The center is carrying out various activities for Nagaland by promoting research, extension and human resource development activities in agriculture and allied sectors. The dissemination of the developed technologies is facilitated by the Central Government’s strong network of 5 Krishi Vigyan Kendras at Dimapur, Peren, Wokha, Kiphire and Longleng districts. The Central Government plays a major role in enhancing tribal livelihoods through various schemes, research and extension activities. This ICAR Center has developed 5 location specific integrated farming system models for different agro-climatic conditions for small and medium farmers of Nagaland, while the dual purpose breeds – Vanraj and Srinidhi birds have been promoted among more than 5,000 tribal farmers. This center has developed and disseminated the technique of artificial insemination in pigs, which is very popular among the tribal farmers of Nagaland. Thousands of tribal farmers benefit from the KVKs under the Central Government. Appreciating the efforts of the ICAR Center, the Union Minister asked them to work with dynamism. 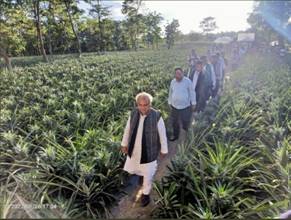