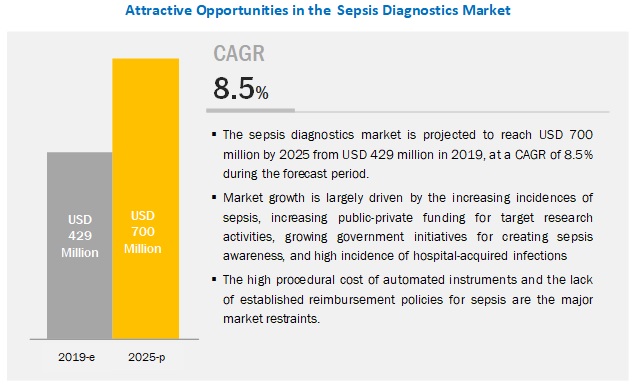 The demand for sepsis diagnostic products is expected to grow mainly due to factors such as the increasing public-private funding for target research activities, the growing burden of infectious diseases, the rising number of sepsis incidences, and growing government initiatives for creating sepsis awareness.
The global sepsis diagnostics market size is expected to reach USD 700 million by 2025 from USD 429 million in 2019, at a CAGR of 8.5%.
Based on technology, the global sepsis diagnostics market is segmented into microbiology, molecular diagnostics, immunoassay, flow cytometry, microfluidics, and biomarkers. The biomarkers segment is expected to grow at the highest CAGR during the forecast period. The growth of this segment can be attributed to various advantages offered by this technique in the diagnosis of sepsis and the growing need for early disease diagnosis.
Based on products, the global sepsis diagnostics market is segmented into blood culture media, assays & reagents, instruments, and software. In 2019, the blood culture media segment accounted for the largest share of the market owing to the increased used of blood culture media as it is the standard method for the diagnosis of sepsis across the globe.
Download a PDF Brochure @ https://www.marketsandmarkets.com/pdfdownloadNew.asp?id=92673155
North America accounted for the largest share of the sepsis diagnostics market
North America accounted for the largest share of the global sepsis diagnostics market in 2019 North America is a well-established market for medical devices. The presence of a highly developed healthcare system, high adoption of innovative sepsis diagnostic technologies among medical professionals, increasing sepsis incidences performed in the region, and technological advancements in the field of sepsis diagnostics are the major factors driving the market in North America.
Key Market Players
Some of the players in the sepsis diagnostics market are bioMérieux (France), Becton Dickinson Company (US), Danaher (US), Abbott Laboratories (US), Roche Diagnostics (Switzerland), T2 Biosystems (US), Luminex (US), Thermo Fisher Scientific (US), Bruker (US), EKF Diagnostics (UK), Immunexpress (Australia), Response Biomedical (Canada), Axis-Shield Diagnostics (UK), and CytoSorbents (US). An analysis of the market developments between 2016 and 2019 revealed that product launches & enhancements, partnerships, agreements, and acquisitions were adopted by market players to strengthen their product portfolios and maintain a competitive position in the market. Product launches were the most widely adopted growth strategies.
Request a Sample Pages @ https://www.marketsandmarkets.com/requestsampleNew.asp?id=92673155
Recent Developments (2016-2019):
• In September 2019, T2 Biosystems launched T2 Resistance Panel
• In September 2019, T2 Biosystems entered into an agreement with BioNuclear Puerto Rico to expand its distribution of rapid diagnostic technologies, including the T2Bacteria and T2Candida Panels, in Puerto Rico and the US Virgin Islands
• In December 2018, BioMerieux (France) received FDA approval for BPA and BPN used with BACT/ALERT VIRTUO for quality control testing of platelets
• In November 2018, BioMerieux (France) received FDA clearance and CE approval for BIOFIRE FILMARRAY Pneumonia Panels
• In September 2016, Danaher acquired Cepheid To expand its molecular diagnostics product portfolio