In Vitro Fertilization Market: Rise in Consumption of Alcohol and Cigarettes 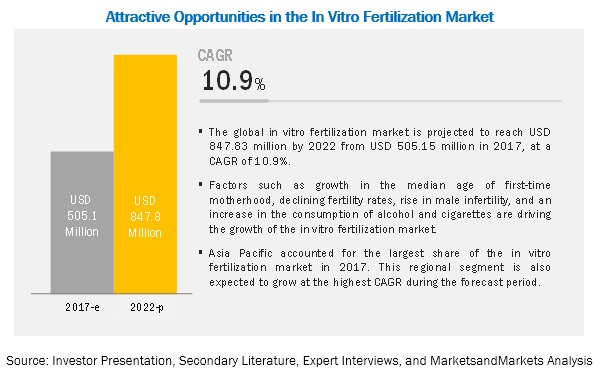 Major factors that are expected to be driving the IVF market are growth of this market include growth in the median age of first-time motherhood, declining fertility rates, rising male infertility, rise in consumption of alcohol and cigarettes, and growing public awareness about infertility and the available treatment options.

Growth in the median age of first-time motherhood

Over the years, the median age of first-time motherhood has increased drastically across the globe. This trend can largely be attributed to improved contraceptive techniques, late marriages, and the growing number of women prioritizing their careers over starting a family. Listed below are some important statistics in this regard:

In women, the chances of conceiving decrease after the age of 32 and by the age of 40, fertility rates drop by half. Similarly, in men, between the age of 20 to 80, the volume of semen and sperm motility (the ability of the sperm to move towards an egg) decrease continuously. Moreover, women delaying pregnancy are at a higher risk of health problems associated with pregnancy after the age of 40, including low birth weight, miscarriage, fetal abnormalities, preterm delivery, prolonged labor, and maternal morbidity.

Asia is one of the most preferred destinations for medical care. One of the major factors driving the medical tourism industry in Asia is the low cost for high-quality healthcare facilities delivered by doctors and surgeons trained and educated in the top institutes in the US and Europe.

According to a survey conducted by the International Federation of Fertility Societies in 2013, there are more than 600 IVF clinics across India. In addition to the availability of advanced healthcare facilities, the cost of an IVF cycle in India is around 70% lower than that of some developed countries. According to the American Society for Reproductive Medicine, an average IVF cycle in the US costs around USD 12,400, whereas the costs drop dramatically to USD 3,000 in India and USD 4,000 in Thailand. Thus, the low cost of the procedure and quality healthcare facilities in Asian countries will create growth opportunities for the IVF market.

In addition to low treatment costs, coupled with high-quality treatments, the presence of liberal laws regarding the IVF treatment is also driving fertility tourism in emerging Asian countries such as India and Thailand. For instance, Thailand is attracting couples for IVF treatment because of its liberal IVF regulations such as gender selection of the embryo before implantation, whereas IVF is banned for couples with a certain number of children in China and the IVF technology is entirely banned under all circumstances in Costa Rica. Also, clinics in India are permitted to transfer six embryos simultaneously, whereas clinics in the UK are allowed to implant two embryos.

In the European region, Spain is the preferred destination for IVF as the country has liberal laws regarding the treatment, with shorter waiting lists and higher success rates compared to other European countries.

The changing social scenario has resulted in an increasing number of older women seeking help from infertility clinics. As a woman ages, it takes her longer to conceive, and the chances of not being able to conceive also increase. Also, the risk of miscarriage and complications in pregnancy and childbirth increase with age.

According to a study by the Advanced Fertility Center, Chicago, 1 in every 4 women is infertile by the age of 35. The study states that the rate of pregnancy declines gradually in the 30s and considerably declines during the late 30s and 40s. Furthermore, a research study conducted among the Hutterite women of North America, who did not use contraception, found that 11% of women were infertile by age 34, 33% by the age of 40, and 87% by the age of 45. The declining success rates of IVF treatment procedures with increasing age of patients is a major challenge for fertility treatment technologies.