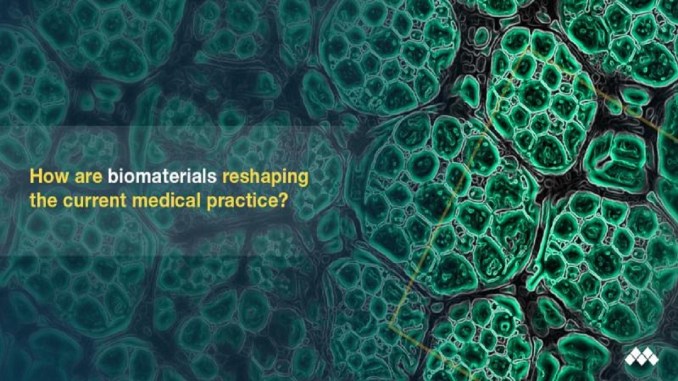 Biomaterials are natural or synthetic materials that can be implanted into body tissue as a part of an implanted medical device, to augment or replace an organ. Some biomaterial-based medical devices include heart valves, stents, artificial knee, and hip joints, among others.

Factors such as the increased funds and grants by government bodies worldwide for the development of novel biomaterials, rising demand for medical implants, and the rising incidence of cardiovascular diseases are driving the growth of the market. Emerging markets such as China, India, and Japan are the key areas of opportunity for players in this market.

The demand for and usage of biomaterials in various medical applications has increased significantly across the globe over the last few years. Also, several government bodies and universities have extended their help in the form of investments, funds, and grants to promote research into the development of novel biomaterials. Mentioned below are some of the important developments in this regard:

These research and funding activities are expected to boost the development of innovative biomaterials, thus offering an array of opportunities for the growth of the biomaterials market.

Biomaterial-based medical devices are stringently regulated in several regions, including North America, Europe, and Asia, to ensure their quality and efficacy. This is primarily attributed to the fact that most biomaterial-based medical devices are implantable. All new biomaterials require proof that they are safe and effective before they can be approved for marketing. Thus, these devices are subjected to the premarket approval application pathway (which is the most stringent type of device marketing application). Moreover, the development of biomaterials involves time-consuming processes and expensive clinical trials. As these products have to be implanted inside the human body, they need to be biocompatible and have to undergo the ISO biocompatibility testing standards. However, it is difficult to anticipate the biocompatibility until the later stages of clinical trials, making companies and investors apprehensive of investing in this market. Also, regulatory procedures are complicated, restrictive, and depend on biomaterial composition and future applications. These factors are expected to restrain market growth to a certain extent in the coming years.

The biomaterials market in developing countries is expected to witness significant growth during the forecast period. This can majorly be attributed to the increasing patient population, rising adoption of implantable devices, growing awareness of CVD, increasing disposable income, improving healthcare infrastructure, and the presence of less-stringent regulatory guidelines (as compared to developed countries) in these countries.

Brazil, Russia, India, China, and South Africa (BRICS) are among the fastest-growing economies in the world. The growing demand for surgical procedures, rising geriatric population, and the increasing incidence of target diseases are some of the significant factors that are expected to drive the demand for advanced healthcare services and novel medical devices in the respective healthcare systems of these countries. This is expected to offer potential growth opportunities to players operating in the biomaterials market in the coming years.

Although significant breakthroughs have been achieved in the field of biomaterials, there are some limitations associated with biomaterial-based products. For instance, the stability and toughness of bioceramics decrease at elevated temperatures, making their manufacturing difficult. Also, ceramic implants have a shorter life cycle as they undergo continuous loosening and dislocation. Similarly, metal polymers corrode easily when exposed to harsh internal environments, such as body acids and enzymes. Leaching of metal ions can also occur from the surface of implants, which results in their wear and tear.

Problems such as stress shielding and implant failure in biomaterial-based orthopedic applications (such as the knee, hip, and joint prostheses) are common. Also, biomaterials sometimes generate adverse immunological and inflammatory reactions and result in infections when in contact with human tissues/organs. These risks posed by biomaterials to patient health are expected to limit the use of biomaterial-based products in some instances.