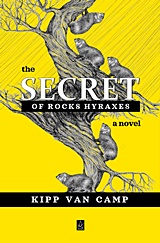 The Secret of Rocks Hyraxes begins at an archaeological dig site in present-day Iran where the oldest recorded human, Methuselah, has been uncovered along with a reportedly indestructible rat species. Montgomery ‘Monty’ Palmer, a scientist researching a cure for his father’s Alzheimer’s, hypothesizes that the rats have been exposed to uranium, resulting in a mutation. If it’s true, could the discovery help save his father?
Realizing the location in Iran is one of the places archaeologists have suggested as the birthplace of civilization, Monty develops a second theory. Not wanting to reveal his “out there” idea to the team of scientists, he keeps his thoughts to himself until the dig uncovers evidence that suggests his radical theory might be right. Instead of excitement, apolitical Professor Palmer is in the center of present-day Iran. Unexpected conflicts with the extreme terrorist group ISIS, ongoing strained US/Iran relationships, and enmity with the Iranian liaison, Singh Prokar; Monty finds he must spend more hours managing his eclectic team of scientists rather than focusing his valuable time on a cure for his failing father.

Dr. Kipp Van Camp, a physician and medical researcher with numerous papers and articles published in the medical journals and online, is also the author of dozens of short stories and two creative nonfiction books Always Allie (2011), and Misdiagnosis: A Practicing Physician’s Case Study on Healthcare Reform (2012). The Secret of Rocks Hyraxes is his first published novel and the first book in the series of thrillers featuring the adventures of the same main characters.