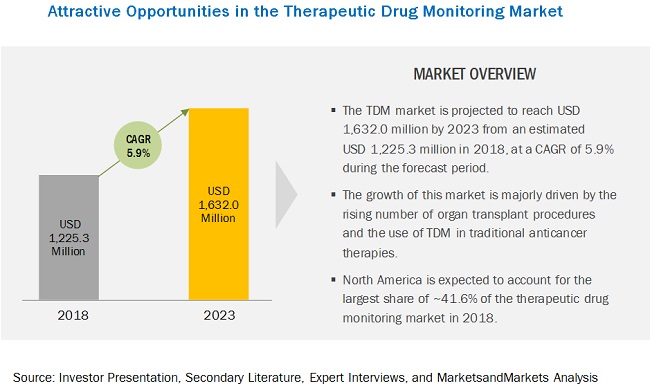 Therapeutic Drug Monitoring Market growth is largely driven by factors rising number of organ transplant procedures and the use of TDM in traditional anticancer therapies. The scope of the study includes the various consumables and equipment’s used to perform therapeutic drug monitoring assays
What the Market Looks Like?
Predicted to grow at a CAGR of 5.9% during the forecast period, the Global Therapeutic Drug Monitoring Market is estimated to reach USD 1.63 billion by the end of 2023.
On the basis of product, the global market is segmented into consumables and equipment. The consumables segment is expected to grow at the highest CAGR during the forecast period. This growth can be attributed to the requirement of repeat purchase of kits and reagents, coupled with the increasing number of immunoassay tests being performed across the globe as a result of the rising incidence of chronic and infectious diseases.
On the basis of technology, the global Therapeutic Drug Monitoring Market is segmented into immunoassays and chromatography-MS. The immunoassays segment is expected to account for the largest share of this market in 2018, mainly due to the increasing incidence of chronic and infectious diseases and technological innovation.
Download PDF Brochure @  https://www.marketsandmarkets.com/pdfdownloadNew.asp?id=155350443
What Drives the Market?
The growth of the global market for Therapeutic Drug Monitoring is primarily influenced by the following factors:
• Use of TDM in Traditional Anticancer Therapies
• Rising Number of Organ Transplant Procedures
• Monitoring of Biosimilars in Autoimmune Diseases
Market Dynamics:
Driver:Use of TDM in traditional anticancer therapies;
TDM provides valuable guidance for the dose adjustment of antibiotics, immunosuppressants, antiepileptics, and other drugs. However, its use in traditional anticancer therapies has been limited. The requirement of multiple blood samples to adequately define the systemic exposure of anticancer drugs is the major issue encountered while testing for anticancer therapies.
Drugs in blood samples have a short elimination half-life and are given by intermittent intravenous injections; this makes the entire monitoring process difficult to analyze. However, newer targeted anticancer therapies have different pharmacokinetic (PK) and dosing characteristics as compared with traditional cytotoxic drugs. Owing to this, it is now possible to estimate the steady-state drug exposure with a single trough-level measurement.
Geographical growth scenario of Therapeutic Drug Monitoring Market:
Geographically, the TDM market has been studied for North America, Europe, Asia Pacific, Latin America, and the Middle East & Africa. The APAC market is projected to register the highest growth during the forecast period. Growth in this region can be attributed to the huge demand for better healthcare services; increasing incidence of chronic and infectious diseases; rapid development in healthcare infrastructure in developing countries such as India, China, and South Korea; growing healthcare research investments in this region; and increasing per capita income of the middle-class population.
Get Your Queries Resolved from Subject Expert | Speak to Analyst:
https://www.marketsandmarkets.com/speaktoanalystNew.asp?id=155350443
Leading market players and strategies adopted:
The prominent players in the Therapeutic Drug Monitoring Market include F. Hoffmann-La Roche (Switzerland), Siemens Healthineers (Germany), and Abbott (US). These companies focus on product launches, approvals, and acquisitions to maintain their strong position in the market in the coming years.
F. Hoffmann-La Roche was the leading player in the TDM Market in 2017. The company’s dominant position in the market is attributed to its broad product portfolio, which includes TDM assays, clinical chemistry, and immunochemistry analyzers. Under its flagship brand, Cobas, the company offers a variety of TDM instruments, reagents, and kits that are widely used by end users across the globe. Roche mainly focuses on product launches to maintain its leadership position in the market. For example, in the last three years, the company has launched Elecsys Sirolimus and Everolimus immunosuppressive drug assays for TDM.