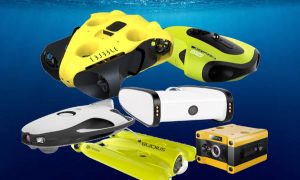 According to the latest report published by Esticast Research & Consulting, the Global Underwater Drone market is expected to garner a significant growth in the forecast period.

Underwater drones, also called as unmanned underwater vehicles (UUV), are the vehicles which are capable of conducting underwater operations without human presence. These vehicles are either, remotely operated, which are directed by a remote human operator or fully autonomous, which can work without any human control, like a robot.

The underwater drones have already been used by the military and defense authorities for a long time, but in the current scenario, the application platform of underwater drones is constantly expanding. Underwater drones are well equipped with various types of cameras as per the requirement. A drastic usage of these drones has been witnessed among the oceanographers and filmmakers for making marine documentaries and other films.

To know more about the report, visit at https://www.esticastresearch.com/report/underwater-drone-market

North America generated the largest revenue for the market followed by Europe in the global underwater drone market. The market for North America is growing due to the presence of major market players and large software service providers in the region. In addition to this, heavy R&D investment by military organizations and constantly rising oil and gas exploration activities are expected to boom in the region.

The research report also helps to recognize the comprehensive profiles of the key players in the market and an in-depth view of the competitive landscape worldwide. Few of the market leaders profiled in the report include Kongsberg Maritime, Lockheed Martin Corporation, Teledyne Technologies, Saab Group, Oceaneering International, The Boeing Company, Subsea 7, International Submarine Engineering, Atlas Elektronik, Fugro, and Bluefin Robotics. A major market player such as Aquabotix has now come up with the latest drone models which could be used by the fishermen in order to detect the actual location of shoals of fish.