Women should be comfortable with the way they are: Masaba Gupta on ‘What Women Want with Kareena Kapoor Khan’ 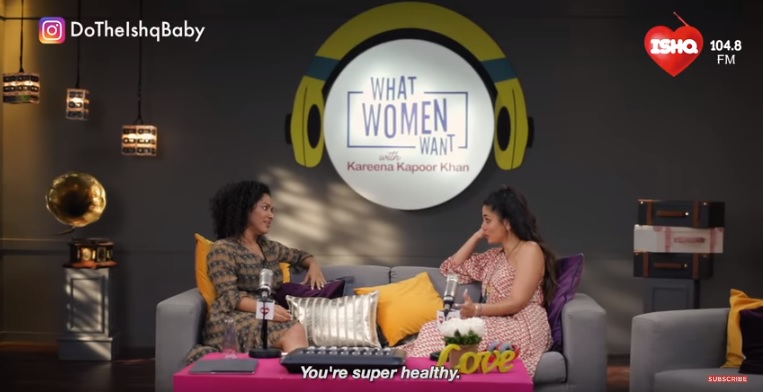 Kareena Kapoor Khan, who has been an inspiration to many women, is setting new ground as a Radio Jockey on the show ‘What Women Want with Kareena Kapoor Khan’ which airs on Ishq 104.8 FM. The show which highlights the stories of unapologetic women who have broken barriers and stereotypes had popular personalities like Sunny Leone, Mallika Dua and Gauri Shinde giving a sneak peek into their lives. The new addition to the glorious list is non-other-than Masaba Gupta, one of the leading fashion designers of our country, who talked about how she has been trolled for sharing her struggles related to acne and body issues across social media platforms. She discussed her constant battle to accept the way she is, why women shouldn’t be worrying about their physical appearance, how she fought with her body issues, how one can effectively stop body shaming, racist comments which she received in here day-to-day life, among other topics.

When questioned by Kareena, ‘What women want with their bodies’? She said. “I guess woman want to be told that they should be comfortable with the way they are. They don’t need to continuously work on themselves out of pressure to come across as beautiful. Come as you are and celebrate it. Also, I believe that it shows on your face what you are from inside.”

Further stressing on it, Kareena who is acing the role of a radio jockey on the show adds, “When it comes to body-shaming, the first advice we get to hear from people around us is self-love. But I believe that to love yourself, you need to first accept yourself and feel normal about it. Until and unless we aren’t comfortable in our skin, we won’t feel comfortable in our clothes.”

Speaking on how she deals with faceless aggressive people trolling, insulting and shaming her on social media, she said, “I counter-attack sometimes as it gives me a feeling of standing up for myself. But there have been times when I have effectively dealt with them by not getting aggressive and making them understand my perspective which has actually worked in my favour. Personally, I feel that it has to be tackled in this way on social media as there is no other way around.”

Talking about the racist comments she received from people around her, she said, “I don’t understand this as we are a very colorful country from North to South. I fail to get people’s obsession with fair skin which has always baffled me. Not only this but sometimes I feel worried to raise a child of mine into this world if the child turns out to be dark skinned.”

In addition to tackling social media evils, the duo also spoke about jokes, which often include fat-shaming or color shaming. Speaking about this, Masaba said, “Some are said in good fun. If it fits the context, it’s ok. But at the same point of time, it can’t be all about it which will be too extreme and sad.”

Tune into ‘What Women Want with Kareena Kapoor Khan’ who shares heartfelt stories of these brave women who are paving a path for themselves in the most beautiful manner exclusively on Ishq 104.8 FM, Mon – Fri at 8 pm and repeats at 10 am and 12 pm.