Will Aircraft Wheel Market to Reap Excessive Revenues by 2018 – 2028 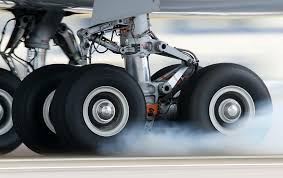 Aircraft wheels are generally overlooked yet important component of an aircraft landing gear system providing the necessary structural strength and support to the tyres. These components take up the major load of an aircraft during taxing, take-off and landing. It has become imperative in the current scenario that aircraft wheels be made as light as possible while still retaining maximum structural strength in order to achieve low fuel consumption. Modern aircraft wheels are typically manufactured by casting or forging process employing two part structure that are combined together to form a wheel. Aircraft wheels differ slightly in design from automotive wheels owing to the fact these have to accommodate multiple disc brake variants.

Affordability, high disposable income among the consumers and increase in number of airports are some of the primary reasons that has influenced the growth of air travel across numerous economies. The demand for air travel is likely to increase in the upcoming years on the backdrop of increasing number of working class population and general need of cheap conveyance from one place to another. As per the reports published by two major aircraft manufacturers, the demand for new commercial aircrafts is expected to improve by more than two hundred percent in the next twenty years coupled by above average growth of passengers which can lead to fruitful prospects for the aircraft wheels market. More than half of the global population are expected to travel by air at least once in 2018 as per reports published by IATA (International Air Transport Association) leading to airline operators to order more aircrafts further strengthening the growth of aircraft wheels market. Sales of aircraft wheels through the aftermarket segment is also estimated to register a positive growth owing to improvements witnessed in aircraft MRO ((Maintenance, Repair and Overhaul) services further benefitting the growth of aircraft wheels market. Another factor that has been the driving force of aircraft wheels market is the trend of major airline operators to regularly lease their aged aircraft fleet to smaller operators, who in turn resort to total refurbishment of the aircraft.

It is no secret that aircraft manufactures takes up a large chunk of lead time, monetary investments, planning among others. These factors can affect the production of aircraft leading to increased order to delivery ratio creating backlogs. This can act as a restraint to the growth of aircraft wheels leading to delayed delivery of the components and payments. Another that cannot be undermined is the lack of well-knit supply chain that can deter the growth of the aircraft wheels market in the forecast period.

The Aircraft Wheels market can be segmented as follows:

By area of application, the market can be segmented as:

Nose wheels
Main landing gear wheels
By sales channel, the market can be segmented as:

Original Equipment Manufacturers (OEM)
Aftermarket
By aircraft type, the market can be segmented as:

When it comes to commercial aircraft production, only two well-known players take up the majority of market share in the current scenario, hence, the performance of aircraft wheels depends on the locality of these two manufacturing powerhouses. As a result, the aircraft wheels market is particularly strong in both North American and Western Europe region. The presence of a well-known, albeit small scale manufacturer of aircrafts in Latin America can lead to opportunities for the aircraft wheel manufacturer to tap onto the region for revenue generation on a long term basis. The market in Asia Pacific is also likely to grow on a positive note owing to emergence of home grown aircrafts in China and large market for airline operators. The same is also true for the Middle East & Africa region where major airline operators thrive in the region creating opportunities for aircraft wheel market to grow.

Below are some of the players in the global Aircraft Wheels market, identified within the value chain: