60% of Automotive Coatings Sold in 2018 were Water-Borne, Finds Fact.MR Study 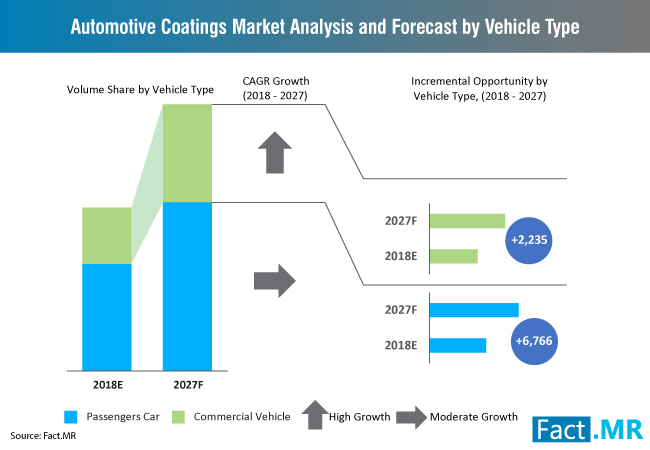 UV cure variants, albeit accounting for minor share of the market currently, have emerged as fast-selling automotive coatings and the status quo is likely to prevail in 2018 and beyond. Demand for solvent borne coatings is expected to remain higher than solvent-borne coatings in 2018, despite concerns regarding their environmental and health impacts. Preference for solvent borne automotive coatings is primarily undergird by their relative superiority in retention of pigments liquid and binding agents.

Fact.MR study opines that acrylics will remain the top-selling resin in the automotive coatings market, as these resins witness predominant use in passenger cars, trailed by fluoropolymers. However, recent shift in manufacturer preferences have led the demand for amines and poly alkyds, and it is highly likely that these resins will record relatively faster volume sales in 2018 and beyond.

“Lightweighting of vehicles and the shift toward low-temperature curing have been driving advancements in automotive coatings in recent years, with leading manufacturers exploring use of high-strength plastics and carbon fiber-reinforced polymers. Automotive coatings manufacturers are also concentrating on the development of “smart coatings” that feature enhanced performance characteristics including solar-reflective functionalities and self-healing or dirt-phobic,” says a lead analyst at Fact.MR

“Penetration of smart solutions in the automotive coatings market entirely relies on requirements of automakers. Demand for self-cleaning, anti-fouling, and anti-corrosion enabling coatings among automotive companies is expected to be a key growth driver for smart coatings in the near future. However, economic slowdown and government regulations and interventions might add to confinements in growth potential of smart automotive coatings,” adds the analyst.