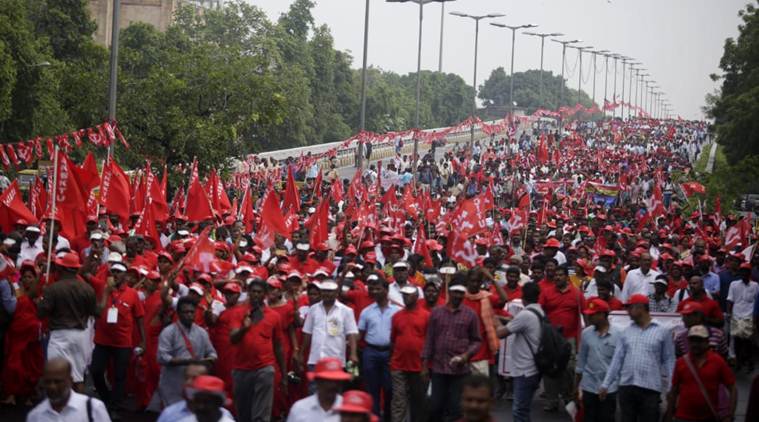 Farmers coming from different parts of the country under the banner of All India Kisan Sangharsh Coordination Committee (AIKSC), protested against the agrarian crisis in Delhi on Friday. These farmers are making some demands including debt waiver and increased minimum support price. Dharna was led by the Left parties, and CPI (M) chief Sitaram Yechury and CPI leader D. Raja were also present. Following his address, party president Rahul Gandhi from Congress, Sharad Pawar from NCP, Delhi CM Arvind Kejriwal, National Conference Kedou Farooq Abdullah, Sharad Yadav of Democratic Janata Dal, Dinesh Trivedi of Trinamool Congress joined them.
The demand of the farmers
By calling the special session of the government, the two important policies firstly Law farmers should be completely free of debt at one go and secondly agricultural produce should be linked to fair and beneficial value, should be passed. There is a provision to increase the cost of farmers’ income to one and a half time.
Addressing the farmers, Rahul said, “Today the issues of farmers and youth in India are the most important. If the Modi government waived three crores of rupees for 15 people, then, why the debt of farmers cannot be waived? This country is not run by any individual, or a party but farmers and workers of the country.”
Rishi Pandey, Secretary of Delhi Youth Congress, says, “PM Modi did not fulfill the promise made to farmers and” stabbed “in the back of farmers. Not getting loans on time, not getting proper crop value and not getting proper protection of the crop, is the biggest problem for the farmers. With immediate effect, the entire debt should be forgiven by ensuring proper payment of the crop in the future and also in order to save the farm from the loss of crop due to natural calamities. It should be done so that farmers can become self-reliant. ”
This is the third time in the last few months that farmers and agricultural laborers have to move Delhi and face dictatorship sitting in the capital.
Farmers say that the cost has increased year after year, but according to that the exact prices of the crop are not available.
Getting the cost of cultivation and the cost of farmers less than the cost of the crop is one of the biggest problems of India’s agricultural crisis. This situation puts the farmer first in debt, and in such situations year after year, forcing him to commit suicide.