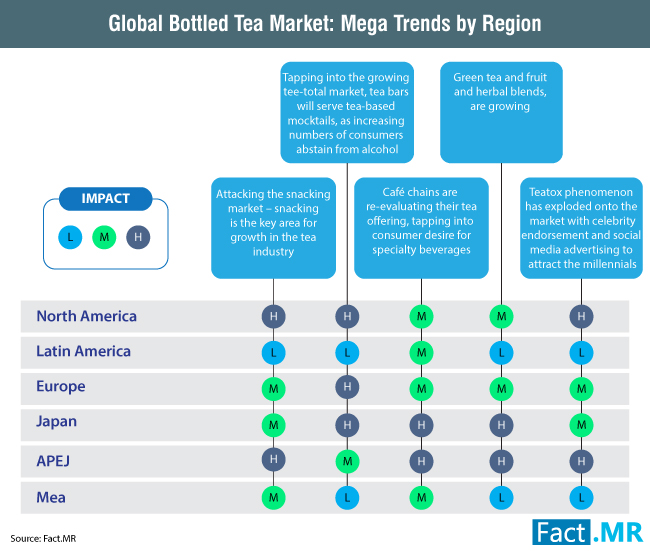 Global consumption of bottled tea is expected to surpass 41 Mn Liters, growing at a Y-o-Y of 3.4% in 2018 over 2017. Overall growth of the Bottled Tea Market can be attributed to,

Increasing appetite for specialty teas and their easier availability
Health conscious consumers preference for healthful tea beverages
Millennials’ developing palate for different RTD bottled tea flavors
Accessibility of bottled tea across various sales channels
“The bottled tea marketplace is heavily impacted by evolving consumer sentiments wherein vendor revenues dwindled half a decade ago on the back of a contagious low- or no-sugar beverage trend. As manufacturers ramped up the production of no-sugar tea varieties, the bottled tea market has surpassed US$ 47 Bn in 2017 and the status quo is highly likely to continue in 2018,” says a senior analyst at Fact.MR.

The study opines that the demand for still variety of bottled tea will witness over 35 Mn Liters consumption globally in 2018. However, sparkling tea revenues are set to grow at a 6% Y-o-Y in 2018 over 2017. This rapid expansion can be attributed to growing demand among millennials and generation Z for sparkling tea, in particular, sparkling ice tea. The bottled tea marketplace is witnessing manufacturer investments in introducing new varieties of sparkling ice tea.

Conventional bottled tea has remained the primary choice among tea lovers until the arrival of organic tea variant. Fact.MR finds that the consumption of conventional variants will hold over 80% of the total bottled tea consumption in 2018. However, demand for organic variants is growing rapidly wherein consumption will increase over 4 Mn Liters in 2018 over 2017.

Fact.MR study finds 30% of bottled tea consumed to be black tea in 2018. Black tea continues to remain the highly popular tea blends and is consumed for its potential health benefits.

HORECA, according to the Fact.MR study continues to present a significant demand for bottled tea.  Consumer packaged goods (CPG) industry is significantly investing in HORECA on the back of growing consumer sentiments such as eating outside home and preference for ready-to-eat foods. The study also finds that modern trade will be the next preferred sales channel for bottled tea among consumers.

The bottled tea market growth, according to Fact.MR will continue its upwards steady trend on the back of increasing preference for ready-to-eat beverages and consumer-driven product innovations. As manufacturers focus on expanding their global footprints, bottled tea popularity is here-to-stay in the future.