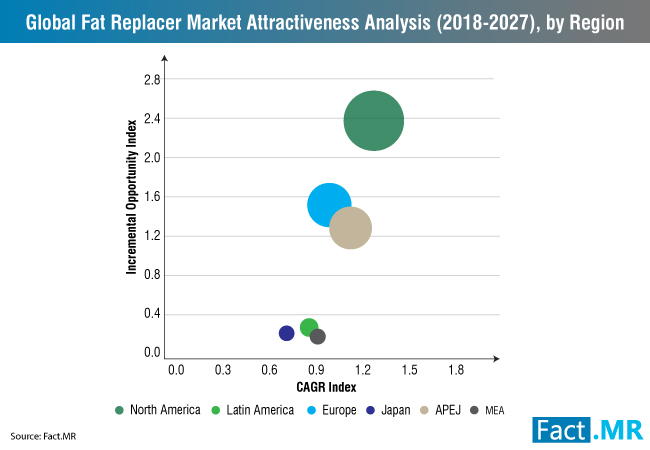 The fat replacers market continues to remain influenced by various factors ranging from increasing demand for low-calorie and fat-free foods to rising health consciousness and focus on weight management among consumers. According to a recent Fact.MR study, the Fat Replacer Market is expected to surpass 62,000 tons by the end of 2018.

Fat replacers including carbohydrate-based and protein-based are used on a large scale as ingredients in various food products. Binding the water activity of the food products, carbohydrate-based fat replacers such as cellulose, gums, pectin, and starches are used on a large scale in salad dressings, frozen desserts, and baked goods including low-fat cookies and cakes.

Commercial bakeries are well established in North America, moreover, increasing demand for low-fat bakery products including cakes and cookies in the region is leading to the increasing use of carbohydrate-based fat replacers in the region. Majority of the fat replacer manufacturers are located in the US with a large global distribution of products.

Carbohydrate-based fat replacers are widely used in various food products in North America owing to its Generally Recognized as Safe (GRS) status. Moreover, the increasing prevalence of severe obesity in North America, especially in the US is resulting in the growing demand for low-fat foods, thereby fueling fat replacer market growth in the country.

According to the US Centers for Disease Control and Prevention, the obesity among adults population increased by around 40% in 2015-2016. In order to tackle the growing problem of obesity in the country, the government has also introduced a limit on the daily intake of fat by an individual on a daily basis.

Majority of the food producers in North America are also under pressure by the government to reduce fat in processed food products. This is driving the use of fat replacers in packaged food products.

The demand for fat replacers made using plant sources is likely to witness significant growth in the coming years. The meat industry is undergoing a huge transformation by addition of the nonmeat ingredients such as plant fat replacers, antimicrobial, and antioxidants derived from plant sources.

Plant as a source of fat replacer is gaining popularity across the globe. Governments are also coming up with new guidelines on food production and consumption. For instance, the new 2015-2020 Dietary Guidelines for Americans has shifted towards diet including a high quantity of plant-based foods than animal-based foods.