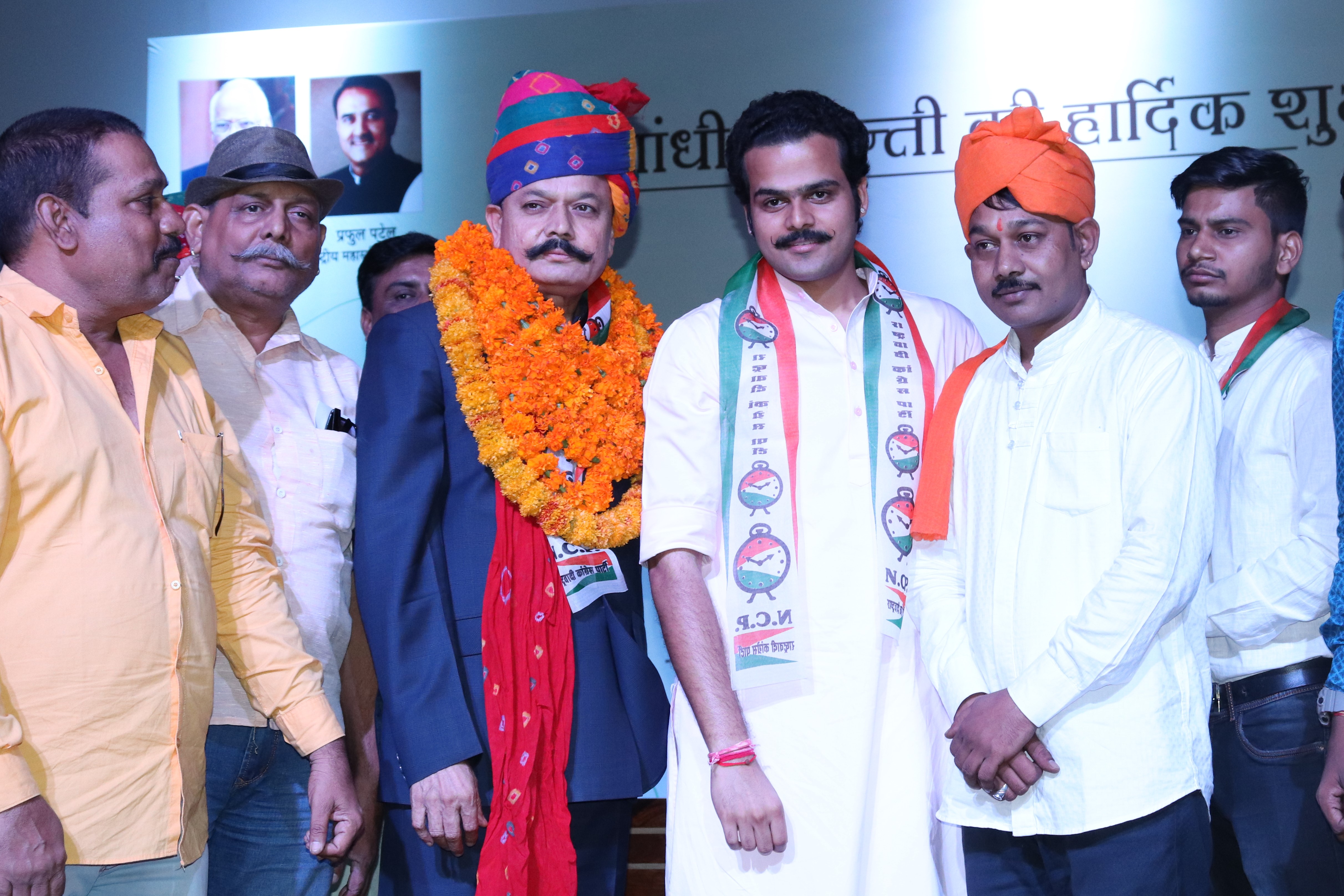 A political storm has brewed up in Rajasthan’s political circles on NCP’s newly elected State President’s daring statement on the occasion of Gandhi Jayanti.

This was probably the first instance in Rajasthan’s politics where an unprecedented mass of supporters gathered at the event with a resolve to battle the Congress and BJP. The scale of support clearly signals the emergence of NCP as a powerful third front on Rajasthan’s political landscape.

Following Shri. Ummed Singh Champawat’s coronation as the State President of the Nationalist Congress Party, Rajasthan’s electorate now has a fresh progressive party to bank upon. After Champawat entry on the political scene, new political equations have emerged in the State. The NCP’s efforts to tighten its hold on the state have received immense boost after the party handed over its Rajasthan reins to visionary entrepreneur and politician Shri. Ummed Singh Champawat. The party will lay a clear focus on the disgruntled and angry Rajput, Brahmin and Muslim voters in the state who are disillusioned by the BJP government.

Ummed Singh Champawat first came into limelight when he fought election against Former Vice-President of India and Former Chief Minister of Rajasthan Late Shri. Bhairon Singh Shekhawat. He has long been active in Rajasthan politics and also heads the All India Kshatriya Mahasabha as its State President. It was already clear that he will be fighting the Rajasthan Assembly Election from Marwad’s Bali seat. But after assuming leadership role of the Nationalist Congress Party (NCP) in the state, he is now spreading Nationalist Congress Party’s footprint across all the 33 districts and two hundred tehsils under his command.

Champawat revealed that he was hoping to reach a respectable consensus on seat-sharing with the Congress. However, if such an agreement couldn’t be reached, he said that the party would contest elections on two hundred seats in the State. Champawat explained that it was NCP supremo Shri. Sharad Pawar’s vision to create a political niche for NCP in the region without upsettng the Congress vote. Like the Pandavas in Mahabharata asked for just a few villages, NCP has demandedwant just five seats, i.e. a few seats. However, if this reasonable demand is not met positively, then the party will exercise other options open to them.

It is significant to note that till date, the Congress party has already suffered maximum damage due to the ups and downs in the Congress-NCP relations in Gujarat. After the Ahmedabad Municipal Corporation, the Congress’s debacle dragged it away from power in Gujarat despite having a fighting chance. The NCP hopes that Congress will learn from this mistake and not repeat it this time around.

Champawat has his origin in Marwad, and enjoys a formidable hold in the Shekhawati area. According to him, Pali Sirohi is like a mini Mumbai. While making observations on Rajasthan’s amazing development prospects, Champawat remarked that although Rajasthan has developed in 20 years, it has occurred at a painfully slow rate. He envisions that Kota should be developed as an SEZ for education, where renowned global universities can be invited to set up powerful educational infrastructure. He observed that of a refinery was built in Barmer, the state could have developed at the pace of the Arab countries. According to him, the state offers a tremendous potential for the Solar Power industry. Champawat believes that like Gujarat, liquor should be banned in Rajasthan. This will reduce crime rates, and create a feeling of safety and security for women and young girls. He explained that the revenue generated from alcohol is low, while the loss incurred due to alcohol is very high. The amount of revenue is more than the expenditure the State has to make on the Administrative Services and the Officers.

Empirically, caste has always played a pivotal role in Rajasthan’s politics. At present, the Rajput society is very angry with Chief Minister Vasundhara Raje about the encounter of gangsters Anand Pal and Chatur Singh. The Ravana Rajput community has openly come out against BJP. Due to the SC-ST Act issue, there is large-scale discontent against BJP in the minds of upper caste communities. This anger against BJP can lead to major benefit for the NCP. Rajputs, Brahmins, Bania, Jats and many OBCs are also disillusioned with the BJP, although they are shying away from voting for the Congress. NCP is perfectly poised as a new option for them. This election will make it significantly comfortable for Ummed Singh Champawat to carve a niche in the party under stalwarts like Shri. Sharad Pawar and Former Minister Shri. Praful Patel.

He said, “Even today, the state is devoid of basic amenities like roads, education, water and electricity. We will contest this State election on the basis of solid issues and on our strategic plans for Rajasthan’s bright future.”

Expanding on his plans for the state’s proper development, he emphasised that timely arrangement of electricity and water will be made available to every farmer, efforts will be made to set up Village Court in every village to deal with litigations in villages. Steps will be undertaken to ban misuse of natural resources. High schools will be opened in every village to strengthen the academic infrastructure. A college will be opened in every tehsil and district. The current ailing medical infrastructure of the state will be revived by opening a state-of-the-art hospital in every village and city, so that people can get treatment and medical guidance at the right time. Women’s security is a big issue for the entire region for which concrete steps have not been taken although currently a lady Chief Minister is in power.

He observed, that “the state is still completely backward. My electoral issues contain everything that will help the state modernise and become progressive. This time, I am coming equipped with a robust road map to fulfill the dreams of Rajasthan’s residents. I believe that this road map can be made only by someone who is inherently strong, and has the necessary will and the spine to communicate directly with the government.”

My objective of contesting the elections can be summarised in a single line: “To make the state financially self-reliant, strengthening every section of society, so that everyone can live in harmony, and walk the road of development with pride and dignity”.

With sincere gratitude and thanks to all our journalist colleagues.