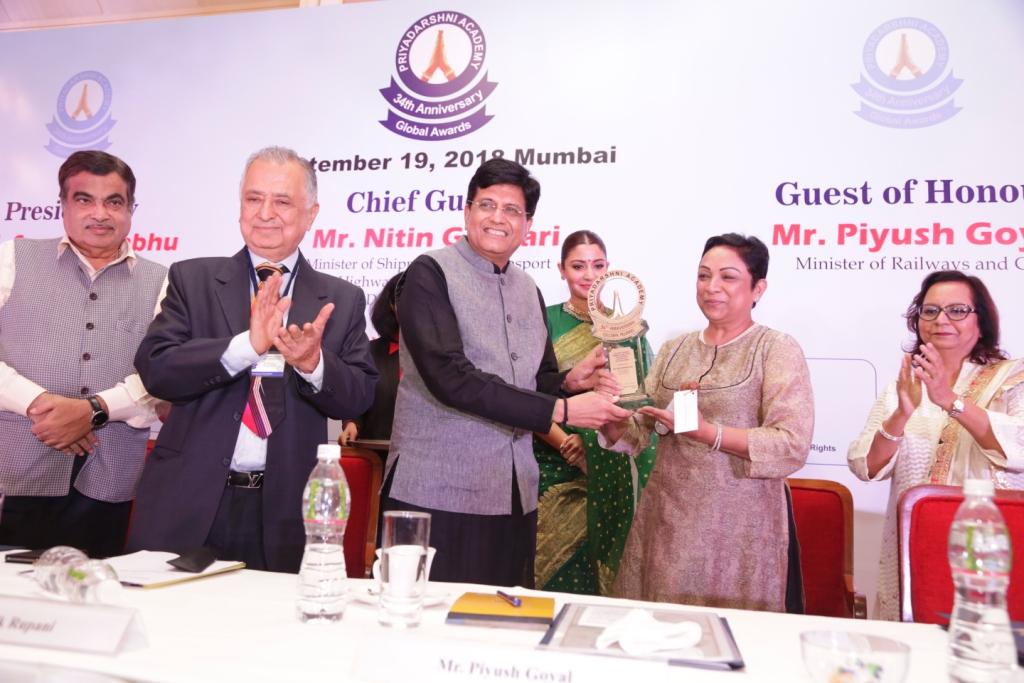 A total of six awardees were felicitated by leading political dignitaries at the Academy’s Awards presentation ceremony .Shri Nitin Gadkari, Minister of Shipping; Road Transport &Highways; Water Resources; River Development & Ganga Rejuvenation,was the Chief Guest at the event, and Shri Piyush Goyal, Minister of Railways and Coal, was the Guest of Honor. Shri Suresh Prabhu, Minister of Commerce and Industry; and Civil Aviation, could not be present but his inspiring video message was played to the audience. Actress Poonam Dhillon and actor Bharat Dhabolkar were also present at the event.

Speaking on the occasion, Ms. Neelam Makhijani, CEO & Country Director of ChildFund India said, “We all hear children are our present and future, they must be protected and well cared for. Hand on heart, as a country can we claim we have done our best? There are millions of children who don’t have access to basic amenities, face abuse and exploitation and are deprived of their dreams. ChildFund works tirelessly to touch lives of millions of children and young people to help them shape their lives because we believe ‘childhood matters’! I feel humbled and honoured to receive the PriyadarshniAward and believe that this not only recognizes the good work done so far, but also encourages and inspires ChildFund to walk many more miles towards a brighter future of our children!”

ChildFund India is a part of ChildFund International – a child protection and development organization working in 25 countries and annually assisting around 18 million children, youth and their families globally. For over 6 decades, ChildFund India has been working with underprivileged children, youth and families from the most remote, extremely backward and hard-to-reach areas, with a vision of “an India where children lead a dignified life and achieve their full potential”. ChildFund India annually reaches over 2.5 million children, youth, and their families across 15 States through its long-term programs by investing nearly 60-70 Crores a year. ChildFund’s unique programs provide comprehensive support to children from their conception until they reach 24 years of age by integrating health, nutrition, sanitation, gender equality, disability, education, skill training, livelihoods, child protection and humanitarian relief work.

ChildFund’s unparalleled longstanding community presence and long-term partnership with grassroots NGOs enables effective implementation of its programs. ChildFund has been successful in establishing relations with relevant stakeholders including the communities it works with, district, state and national government bodies, academic institutions, media, funding agencies and corporates to strengthen child protection systems in order to prevent violence against children and protect them from abuse, neglect and harm. ChildFund is working in collaboration with the Government of Andhra Pradesh and Telangana, NCPCR and State Commissions for Protection of Child Rights under the Ministry of Women and Child Development to achieve their mutual goals.

Priyadarshni Academy was set up in the year 1985, as a non-profit, socio-cultural and educational organization by Founder and Chairman Emeritus, Mr. NanikRupani, in association with a group of people. The Academy was started with the aim of rendering service to humanity. Mr. NanikRupani believes that ‘Service to Humanity is the Best Work of Life’. Since we have taken so much from society, it is our duty to pay back. The Academy has successfully met its goals consistently since its inception. It provides educational assistance to deserving and needy students; promotes Indian classical performing arts by organizing shows; presents literary awards in Hindi, Marathi, Sindhi, and Gujarati; and publishes books to spread ancient Indian wisdom.

The Academy’s biennial Global Awards function is a very significant event. These awards honor outstanding contributions of international dignitaries and are often referred to as India’s Nobel Prize.