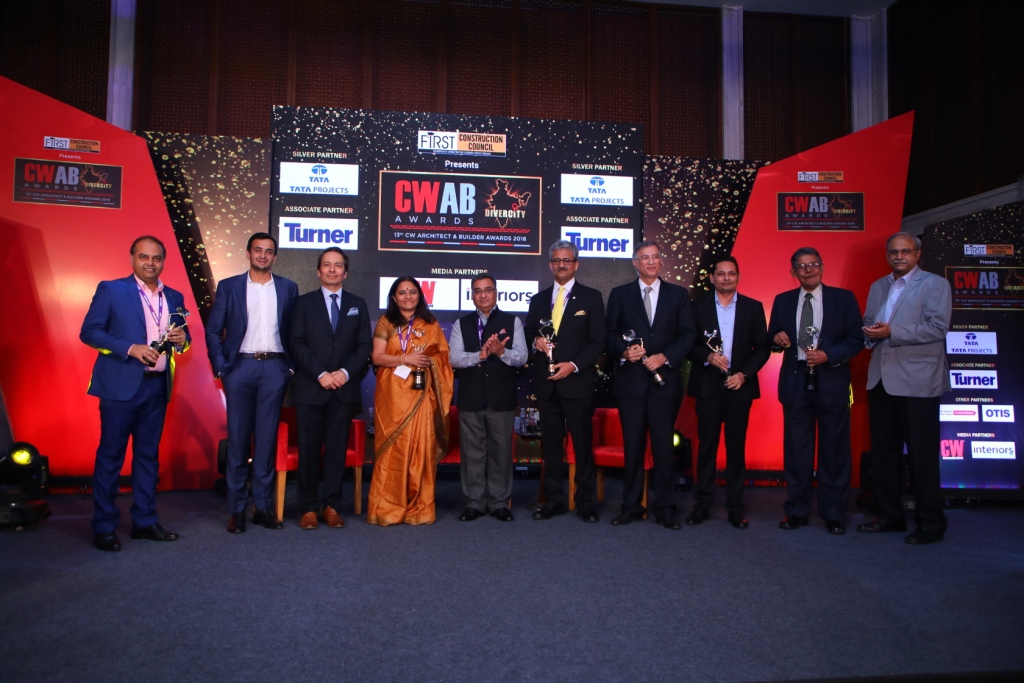 The FIRST Construction Council has announced the winners of the Construction World Architect and Builder (CWAB) Awards 2018. The Award ceremony was graced by the presence of Mr. Sanjay Seth, Senior Director, Sustainable Habitat Division, TERI as the Guest of Honour and Mr. Edgard Kagan, US Consul General in Mumbai as the Special Guest.

The CW Architect and Builder Awards is a 12 year old property that has awarded India’s leading Architects and Builders (National) who have pan-India presence with projects executed and delivered across the country. This year, we have opened the national category to Nominations for the first time. It has received over 250 nominations from across the country. These nominations were shortlisted and put to an elite jury and their connection with the industry and stalwarts, helped arrive at the final selection. It consisted of had two juries: one each, for architects and builders. Additionally, the award also recognises Noteworthy Projects that have been conceptualised and executed with excellence in the residential, commercial, retail, hospitality, institutional and township segments in India. We received over 300 nominations in the Noteworthy Projects category.
On this occasion Mr. Pratap Padode, Founder and President, FIRST Construction Council, stated, “”Real estate prices will move to the tunes of infrastructure. The Smart Cities Mission and AMRUT are all efforts at creating islands of excellence but the biggest driver for real estate demand in the future will be transportation. Be it metro rail, airports, regional corridors, Bharatmala or Sagarmala, ‘ease of living’ will be most critical factor next to economic rationale. The CWAB awards recognise good governance apart from creativity and delivery. The awardees across 13 cities indicate the shift in real estate demand.”

For the first time this year, the award has also introduced a Regional category – the CWAB Regional Awards where one architect, interior designer and builder from each region will be awarded and recognised for his/her work in a particular region. We received over 250 nominations, from 56 cities, which were then shortlisted and put before 4 separate Juries in the Four Regions. Our teams travelled to these locations and interacted with the juries and audiences invited for the events. The Regional winners are present here today, giving them an opportunity to be felicitated on the national stage with the stalwarts of the industry. Between the national, regional and noteworthy projects nominations, we received around 850 nominations! Such an overwhelming response encourages the council to create such properties and further the cause of the industry.

Reports indicate that the real estate sector in India is likely to reach a market size of $180 billion by 2020, from $126 billion reported in 2015. The housing sector’s contribution to the Indian GDP is expected to almost double to more than 11 percent by 2020. The continuation of such awards helps in the development of the sector by boosting the morale and creating the competitive spirit for striving for excellence. The First Construction Council strives to be an enabler of communication, information and policy advocacy in the construction segment. The council will always support dedication, expertise and ceremony excellence through such award shows, events and platforms. It is the exclusive platform in India that brings architects and builders collectively under one roof to communicate, engage and helps in the further development of business prospects.