Global Simultaneous Localization and Mapping (SLAM) Technology Market to witness a CAGR of 63.8% during 2018-2025 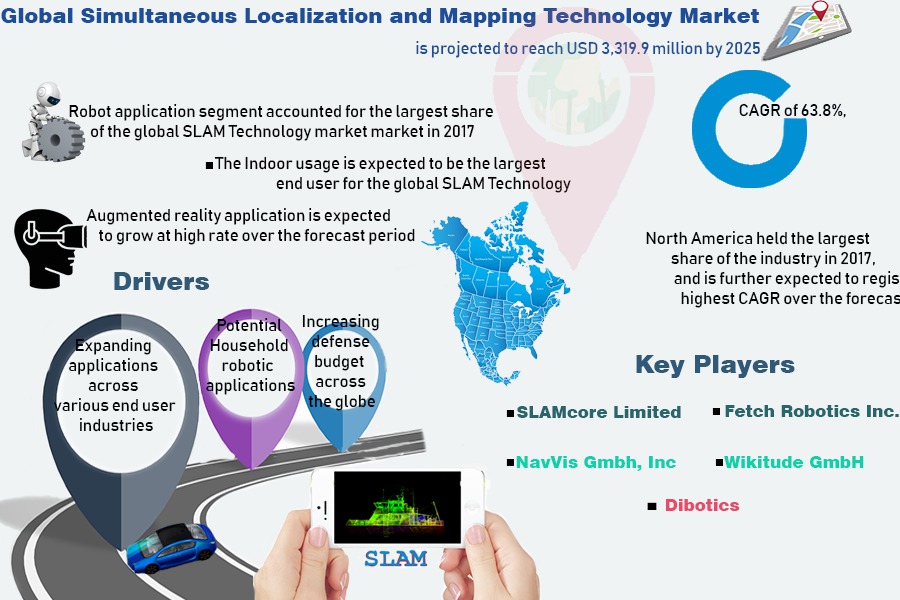 The global simultaneous localization and mapping (SLAM) Technology market is expected to witness a CAGR of 63.8%, and is projected to reach USD 3,319.9 million by 2025. Growing interest in the technology particularly from industries including augmented virtual reality and autonomous vehicle has resulted in the expansion of SLAM Technology across the globe Moreover, application of SLAM technology in mobile robotics for both indoor and outdoor environment application opens pool of opportunity for the larger adoption of the technology across across various end user industries. SLAM tech have been implemented in Google’s driverless cars for successful localization and mapping. SLAM has find its application in outer space as highly potential technology and is being used for navigation on MARS helping SLAM tech market to expand at significant rate.

SLAM technology involves map creation of the surrounding environment and orienting it properly with the map in real–time by means of robot or devices using a range of algorithms. SLAM has gain importance in recent years and is being implemented in varied applications in autonomous systems. Emergence of indoor applications of mobile robotics coupled with autonomous indoor navigation software for drones has gained traction in recent time. Companies are keen to look for solution which are intended to help drones to navigate in the complex obstacles and terrain with lack of GPS connectivity, thus providing thrust to the SLAM technology market.

SLAM has gained importance and interest across various vision companies as a potential tech for augmented and virtual reality. Augmented reality experiences are image marker-based, requiring pre-defined image for pointing the device camera. Using SLAM technology augmented reality applications are able to recognize and track 3D Objects & Scenes, and overlaying digital interactive augmentations. Tech companies are continuously looking to implement SLAM tech. Into their devices. Companies such as Apple are in continuous efforts to enter into augmented and virtual space opening pool of opportunities for SLAM tech market to grow at rapid rate over the coming years.

North America holds the largest share of the global market in 2017. U.S. is at the forefront of developing and implementation of SLAM technology across various platforms and is expected to be the largest market over the forecast period. The increasing number of industries adopting automation throughout the nation coupled with rising application of UAVs have led the path for market growth in the Nrth American region. Given the technological advancement and hub for innovation, Europe is expected to be key region providing thrust to the global SLAM Technology market.