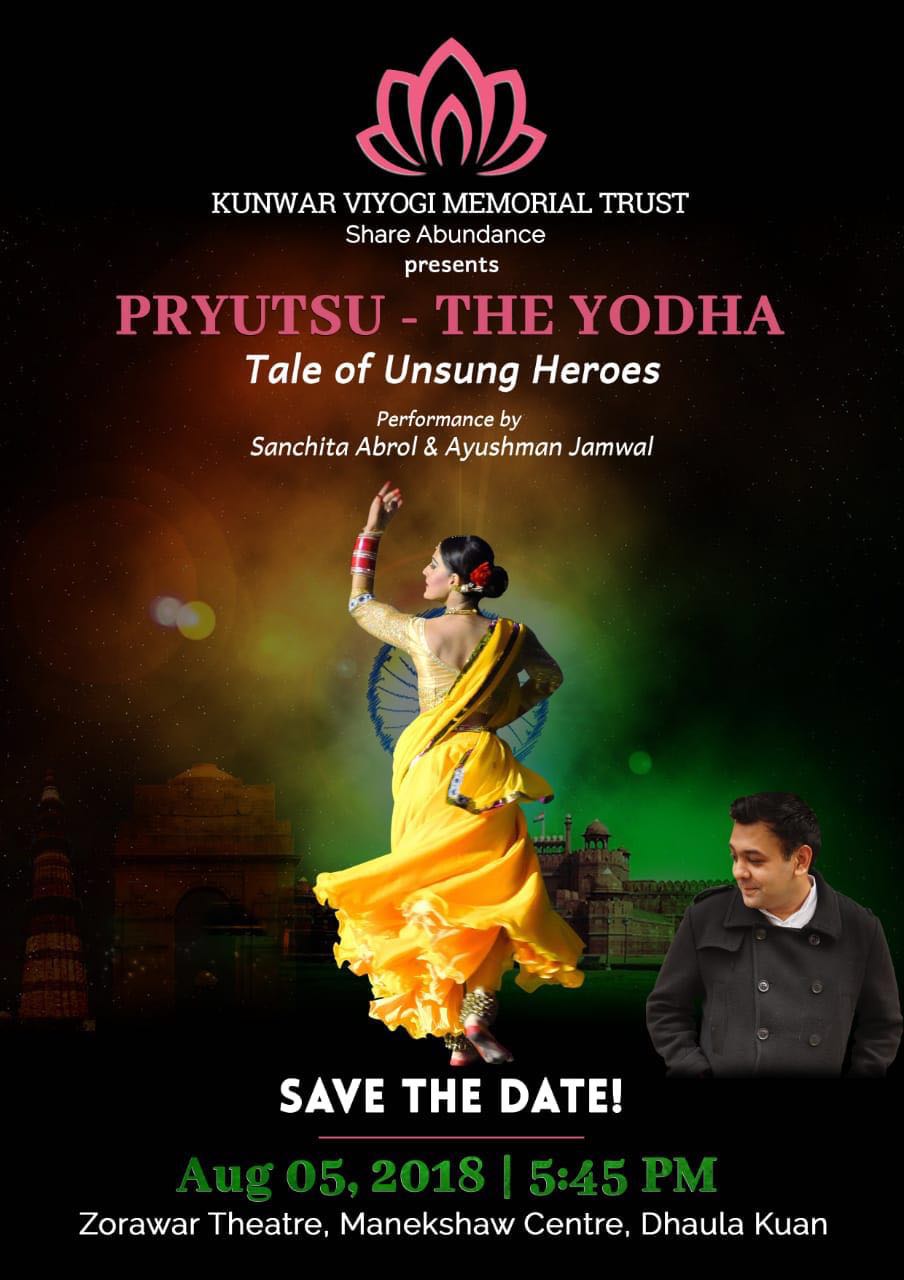 Innovation in Art – Colours of Independent India is Kunwar Viyogi Memorial Trust’s latest endeavour to honour the selfless sacrifices of the Indian Armed Forces and give salutations to their bravery.
The Kunwar Viyogi Memorial Trust will pay tribute to the nation’s brave warriors through the Kathak dance-drama Pryustu (The Yodha) – Tale of Unsung Heroes on August 05, 2018 at the Manekshaw Centre, Dhaula Kuan.
Curated by Trust member, author and journalist Ayushman Jamwal, ‘Innovation in Art’ has been a mega success in Jammu, Srinagar and Chandigarh, and is being organized again to commemorate the 119th birth anniversary of the first recipient of the Maha Vir Chakra, Brigadier Rajinder Singh Jamwal.
A documentary on the brave Dogra warrior will also be showcased, highlighting the supreme sacrifice of his band of soldiers, who in 1947 fought against Pakistan, delaying the invasion and preventing Jammu and Kashmir from falling into enemy hands.
Pryutsu (The Yodha) is directed by internationally acclaimed Kathak dancer Sanchita Abrol, the disciple of Padma Shri Shovana Narayan.
“Through her performance, the artist illustrates the life of a soldier, who leaves his home behind to serve the nation. As the soldier moves to the battlefield, ready to confront the enemy, his heart beats for his home and family. The inner voice of a warrior is filled with emotions, and the strength embodied in the imagery of courage depicts his desire to protect the country – his heart and his HOME,” says Ayushman Jamwal.
The performance is based on classical Dogri poetry by renowned poet, writer and Sahitya Akademi Awardee, Group Captain Randhir Singh, popularly known as ‘Kunwar Viyogi’ in literary circles, and the poem ‘May The Valley Hear Me Roar’ by Ayushman Jamwal.
The Kunwar Viyogi Memorial Trust, founded in the memory of Group Captain Randhir Singh focusses on education, artistic innovation and technological advancements in language, literature and entertainment. The Trust also works towards the revival, preservation and promotion of the Dogri language.