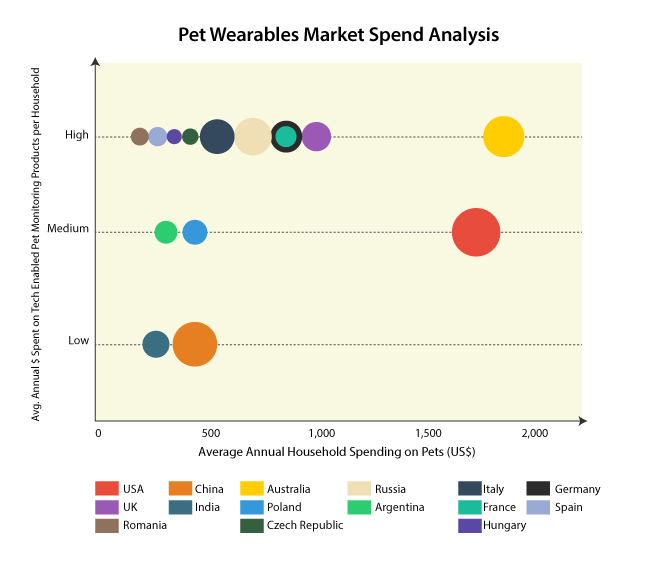 In the era of automation, advancements in wearable technology are no big deal as pet wearables go GPS-driven. New age technological advancements, coupled with proliferation of the Internet of Things (IoT), have translated into rise in adoption of various smart pet tech products including pet activity monitors and GPS trackers. A new Fact.MR research study projects activity monitors to expand at a meteoric pace through 2028, however, this statistic lacks in offsetting the supremacy of GPS trackers as the most used pet wearable. The study foretells that the pet wearables market is likely to exhibit a strong 7.6% value CAGR throughout the period of assessment, 2018-2028.

Medical diagnosis and treatment have gained alarming importance, underpinned by a significant rise in pet health issues. For instance, rising concern regarding obesity among cats and dogs has compelled pet owners to adopt continual pet health monitoring. According to APOP (Association for Pet Obesity Prevention), the rate of obesity among pets has increase in the past few years. In the United States alone, 54 percent of dogs and 59 percent of cats were overweight in 2017.

Obesity being one of the major factors reducing life expectancy by around 3 years, it has become essential to use pet wearables such as activity monitors to facilitate preventive health maintenance. Although medical diagnosis and treatment account for a major share in the pet wearable market, sales of wearables in pet identification and tracking are likely to witness a significant rise, making it a second most attractive sales funnel for manufacturers of pet wearables.

Sales of pet wearables have been largely influenced by increasing household spending on pet health and monitoring. According to the analysis revealed by the APPA (American Pet Products Association), in 2017 more than US$ 69 billion were spent on pets in the United States alone of which pet tech products accounted for around 6.7 percent. This aspect is also influenced by a high purchasing power parity of the United States citizens, making US the largest market for pet wearables.

Furthermore, the Asia Pacific excluding Japan (APEJ) pet wearables market continues to remain concentrated in the emerging economies of China and India. Given the rising pet ownership amongst the burgeoning middle class in China, stakeholders are looking forward to encash the booming opportunities in the country, venturing into development of wearables such as GPS trackers and activity monitors for pets. Likewise, the Indian market for pet wearables has also reflected tremendous potential with demand rising at a stellar rate of 8.3% during the 2018-2028 timeline, according to Fact.MR study.

“The pet wearable sector is likely to permeate the Indian market wherein stakeholders can leverage the immense potential in the country on the back of increasing pet parents across India’s metropolitan cities. Moreover, growing number of expos have furthered the significance of pet care, specifically targeting pet lovers. For example, the India International Pet Trade fair and Petex India, have largely contributed to the pet care cause. Overall, the optimism portrayed by the country is likely to pave new growth pathways in the years to follow” – Research analyst at Fact.MR

Will United States continue with its status quo as a market leader in the pet wearable space or will APEJ turn the tables against this pet wearable behemoth? Find out more in the captivating research study on pet wearables market by Fact.MR.