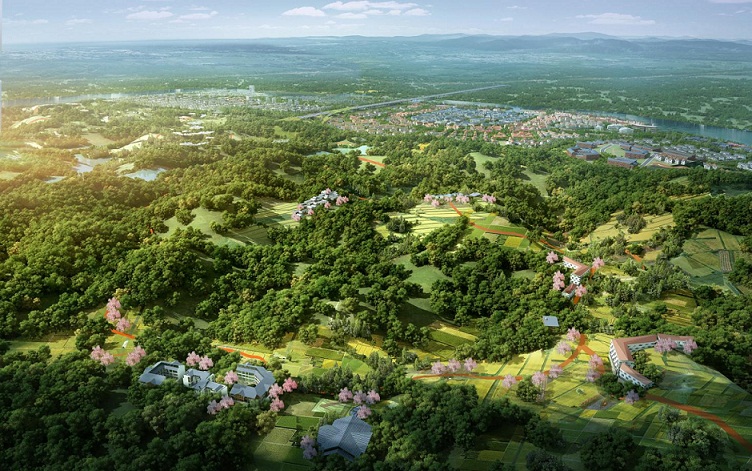 On July 6, the opening ceremony of Sino-French Agricultural Science and Technology Park & “Rural Revitalization and International Cooperation” China (Meishan) Sino-French Friendly International Exchange and Cooperation Dialogue Meeting was held in Meishan, Sichuan Province, which served as a milestone – Sino-French Agricultural Science and Technology Park Project, which covers a planned area of 18 square kilometers with a total planned investment of about 30 billion Yuan.

OCT, with a total investment of 300 billion Yuan, greatly contributes to the development of Sichuan Province.
Overseas Chinese Town Group is a large central enterprise directly under the custody of the SASAC of the State Council. It exerts effective control on a number of listed companies, such as OCT A, Konka Group, OCT Asia, Yunnan Tourism, Top-Sight Culture Media. It is one of the first cultural industry demonstration bases and one of top 30 cultural enterprises. Since 2010, it has been granted the award – A-level of Annual Performance Appraisal of the SASAC of the State Council for seven consecutive years, with its asset scale exceeding 300 billion Yuan. It has been listed as one of the world-leading four theme parks for five consecutive years, with a total of nearly 400 million visitors, thus taking the lead in Asia. In the future, Overseas Chinese Town Group will participate fully in the cooperation and development of real estate, finance, culture, tourism and other fields in Sichuan, form new urbanization, all-for-one tourism, cultural and creative industries, financing platform, development and operation of urban complex, development and operation of theme hotels, intelligent management output and other business sectors, actively expand new urbanization business, fully promote the all-for-one tourism development in Sichuan and the construction of world tourism destinations, and pull off the goals of “China’s Culture Industry Leader, China’s New Urbanization Leader and China’s All-for-one Tourism Fugleman”.

Gathering superior resources to create a model of Sino-French international cooperation
The Sino-French Agricultural Science and Technology Park Project will be jointly developed by the Overseas Chinese Town Group and France OBEO Group. As one of the Top 30 National Cultural Enterprises, China’s Culture Industry Leader and one of the top 4 Global Theme Park Groups, OCT will cooperate with OBEO Group who is leading in the fields of agriculture, health care and tourism in France to set a benchmark for China’s international agricultural joint innovation action.

Integrating industry with the town to create an international new model of urbanization
The Sino-French Agricultural Science and Technology Park belongs to the Meishan Area of Tianfu New Area in Sichuan Province, adjacent to Tianfu New Area directly under the custody of Chengdu on the north, near Jinjiang cultural ecological belt on the west, close to the provincial-class scenic spot of Pengzu Mountain on the East and adjacent to the famous historical and cultural towns which are the Huanglongxi Town and Jiangkou Town. Its location conditions are superior, natural ecological background is with high quality, and historical and cultural background is deep.

Rural revitalization and the creation of the beautiful prospect of urban and rural residents’ common prosperity
As early as 2015, the Sino-French Agricultural Science and Technology Park was shown in the Climate Conference in Paris and amazed all sides. It was listed as a memorandum of cooperation between the local governments of China and France and became a key project promoted by the local governments of both countries. In 2018, the project was listed as one of the 100 key projects in Sichuan Province. The project is based on the ecological scenery and implanted the exotic atmosphere, echoes the local humanity history in Meishan, and deeply combines the health care culture of Pengshan for thousands of years to create a cultural tourism industry. The related person in charge of the OCT project has said, relying on the absorption and radiation ability of the large project, the new cultural vitality will be injected into the rural cultural construction of the Meishan Area of Tianfu New Area and a richer cultural connotation will be given. Integrating the local culture and ecological landscape, the built Sino-French Agricultural Science and Technology Park constructs the beauty of “seeing mountains, seeing water, remembering homesickness, keeping the memory of the city, and realizing the common prosperity of urban and rural residents”.